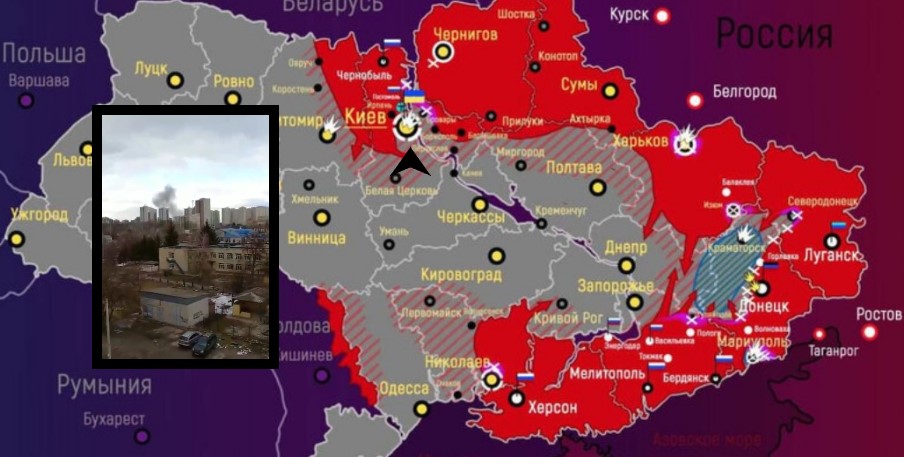 Already on the 11th day of the war, Russia's tactical warfare to conquer critical infrastructure such as power, electricity or water plants throughout Ukraine had become visible. Moscow is currently concentrating its troops around Kiev. The Ukrainian leadership assumes that the "key battle for Kiev" is imminent.

Here is the latest control-of-terrain map for #Russia's invasion of #Ukraine from @TheStudyofWar and @criticalthreats. The biggest changes in control over the past 24 hours have been Russian advances near key frontline neighborhoods in the northern and western #Kyiv outskirts. pic.twitter.com/EWRuCH8Aib

The military situation in the Ukraine on March 8, was outlined by Deutsche Militärzeitschrift (DMZ) military expert Hagen Eichberger in an interview with German weekly Zuerst!

Russian offensives on Kiev, Kharkov and Mariupol show the tactical route of the Kremlin, which seems to want to control the approaches to the Black and Azov Seas in the south, establish the land bridge to the Luhansk and Donetsk oblasts and occupy large parts of eastern Ukraine.

Ukraine’s armed forces face a difficult choice. In the next few days, Russia’s armed forces will be sufficiently assembled to advance in masses towards Kiev. So far, Russian troops have been stationed in suburbs to the north, north-west and north-east of the city, and units from the east have been advancing on the capital since Monday.

Currently, three Ukrainian brigades maintain a westbound axis of communication, which is central to the supply lines to Lviv. “From a tactical point of view, Russia will try to block the routes to Kiev on all sides, but strategically the most important will be the blocking of the western approaches to the capital. If Moscow manages to cut this vein, military and other everyday goods can no longer move,” Eichberger explained.

In the south of the capital, Ukrainian forces are also currently holding a number of tactically important points that would allow troops to be withdrawn from south-eastern Ukraine and transferred to the capital for reinforcements before the Russians manage to close the pocket. While Russian sources report that the main Ukrainian army is surrounded in the east of Ukraine, Western sources assume that the main part of the Ukrainian ground forces is in the south-east and could therefore still be withdrawn to Kiev.

These Ukrainian troops are “currently forming a line along the separatist areas and the newly occupied area on the Black Sea coast up to the Crimea. If this mechanism is weakened, the remaining brigades come under additional pressure. Russian attacks are possible from the north (Kharkiv), east (Luhansk, Donetsk) and south (Crimea). This could mean that the Ukrainian troops in the south-east could get trapped – and be at the mercy of the enemy. In this way, the Kremlin would come a step closer to smashing the Ukrainian army, one of the goals of the war, with relatively little effort,” according to NZZ.

The Ukrainian army command is therefore faced with the painful decision to join forces for the supposed battle for Kiev, but in doing so it would give up the east and the south.

US military analysts assume that both Russia and Ukraine still have the bulk of their combined fighting strength in Ukraine.