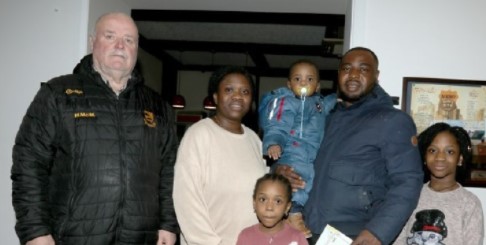 The Irish town of Donegal has welcomed "refugee families from Ukraine". The first alleged Ukrainian family that was able to get asylum in hospitable Ireland, is however a black African family.

Welcoming a black family from Ukraine is all the more curious since President Zelensky signed Europe’s first law on racial purity, known as the “Indigenous Peoples of Ukraine” on July 21, 2021.

It stipulated that only Ukrainians of non-Slavic origin, as well as Tatars and Karaites have “the right to fully enjoy all human rights and all fundamental freedoms” [sic], thereby depriving Ukrainians of Slavic origin of the same rights. “This is the first racial law passed in Europe in 77 years,” according to Thierry Meyssan.

“The groups that define themselves as ‘Ukrainian nationalists’, do not defend Ukraine as a nation,” he said. Instead they claim their Scandinavian ethnic origins in opposition to the Russians. It is therefore quite surprising that “racially pure” Ukrainians now also include black Africans, especially in the light of the ethnic-cleansing campaign launched in 2020.

While the Ukrainian population speak Russian, Ukrainian and Hungarian (or Magyar), the use of any language other than Ukrainian has been strictly forbidden in public administrations and schools since 2020. Russian- and Magyar-language schools were shut down, despite official protests from Russia and Hungary.

It is noteworthy that a large part of the “Syrian refugees” fleeing to the EU from the “bloody regime of Bashar al-Assad” also hailed from other continents. In France too, in the flow of people identified by the authorities, 30 percent are migrants of other nationalities, including many Africans.

The ethnic cleansing campaign was launched after US billionaire Erik Prince, the founder of the private army Blackwater, signed various contracts with Ukraine. One of these contracts gave him the authority to supervise the “racially pure” Nazi Azov Regiment.

Ireland is expected to take in over 100 000 “Ukrainian refugees”, Minister of State Anne Rabbitte announced. According to the Irish Times, these refugees will be placed outside of urban centres.

Local authorities, including Donegal County Council, were asked to identify possible accommodation. Rabbitte said significant numbers could be expected within the next few weeks.