New monkeypox cases appearing across Europe have been linked to gay events in Antwerp and Madrid. Spain’s 30 cases were traced back to a sex sauna, according to officials. Madrid’s health chief, Enrique Ruiz Escudero, confirmed that a “notable proportion” of European cases were detected in gay and bisexual men. Three cases in Belgium were linked to a fetish festival.

The UK Health Security Agency has identified 20 cases so far, but chief medical adviser Dr Susan Hopkins told the BBC’s Sunday Morning programme: “Absolutely, we are finding cases that have no identified contact with an individual from west Africa, which is what we’ve seen previously in this country.

“The community transmission is largely centred in urban areas and we are predominantly seeing it in individuals who self-identify as gay or bisexual, or other men who have sex with men.”

On Sunday, May 22, Israel and Switzerland confirmed cases of monkeypox, bringing the number of countries affected to 14 in Western Europe, Australia, the US and Canada.

The Daily Telegraph linked the Belgian cases to the gay community while Portugal’s first 14 cases were also from gay males.

Dr. David Heymann, chairman of the WHO’s advisory group on infectious diseases, noted that the virus had not previously triggered widespread outbreaks beyond Africa, where it is endemic in animals. In Central and Western Africa, people mainly become infected with monkeypox through animals such as rodents and primates.

“We know monkeypox can spread when there is close contact with the lesions of someone who is infected, and it looks like sexual contact has now amplified that transmission,” said Heymann. “This is not COVID,” Heymann told AP, but German scientists from the Robert Koch Institute described the current situation as an “epidemic”.

“It’s very possible there was somebody who got infected, developed lesions … and then spread it to others when there was sexual or close, physical contact,” Heymann said, adding that “these international events … seeded the outbreak around the world, into the US, and other European countries.”

The Antwerp festival describes itself as a place where “various tribes in the gay fetish community (leather, rubber, army, skinhead, puppies…) come together to create a unique spectacle of fetish brotherhood”.

The festival’s website blamed foreigners for the outbreak: “There’s reason to assume that the virus has been brought in by visitors from abroad to the festival after recent cases in other countries.”

WHO finger homosexuals as the culprits, but it could be a smokescreen 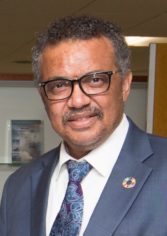 WHO Director General Tedros Ghebreyesus, receives funding from mega vaccine investor Bill Gates. In May 2017, a cover-up of three cholera epidemics in Ethiopia under Tedros (2006, 2009 & 2011) were noted. They were labelled as “acute watery diarrhea” without confirmation of Vibrio cholerae, an attempt to play down the significance to ensure Tedros did not appear inept.

The World Health Organization (WHO) confirmed on Monday, May 23, that the monkeypox outbreak traced its roots to homosexual men who had attended sex events in Europe. Monkeypox, like influenza, is not considered an STD.

It has often been mistaken for chickenpox or shingles. In the absence of smallpox, “the main clinical diagnostic problem is the differentiation of human monkeypox from chickenpox”. The Herpes Simplex Virus (HSV) is a common cause of ulcerative skin disease in both immune-compromised and immune-competent individuals. As such, HSV has been classified as an “AIDS-defining condition”.

“When symptoms do appear, they initially present with tingling and/or redness, followed by blister-like lesions that rapidly merge into open, weeping sores. The sores are often quite painful and can be accompanied by a fever and swollen lymph glands,” as with monkeypox.

According to researchers from the The Exposé, we are “witnessing the consequences of the damage that has been caused to immune systems by the Covid-19 injections in the very same first-world countries, and authorities are rushing to cover it up”. They believe monkeypox is in fact VAIDS or “vaccine-acquired immunodeficiency syndrome” which has become widespread in the most jabbed countries.

Belgian expert Geert Vanden Bossche has warned that the mass vaccination campaign was “an assault on [people’s] immune system” that would have “dramatic consequences for both individual and public health”.

Reuters dismissed the relationship to VAIDS in a “fact check” however.