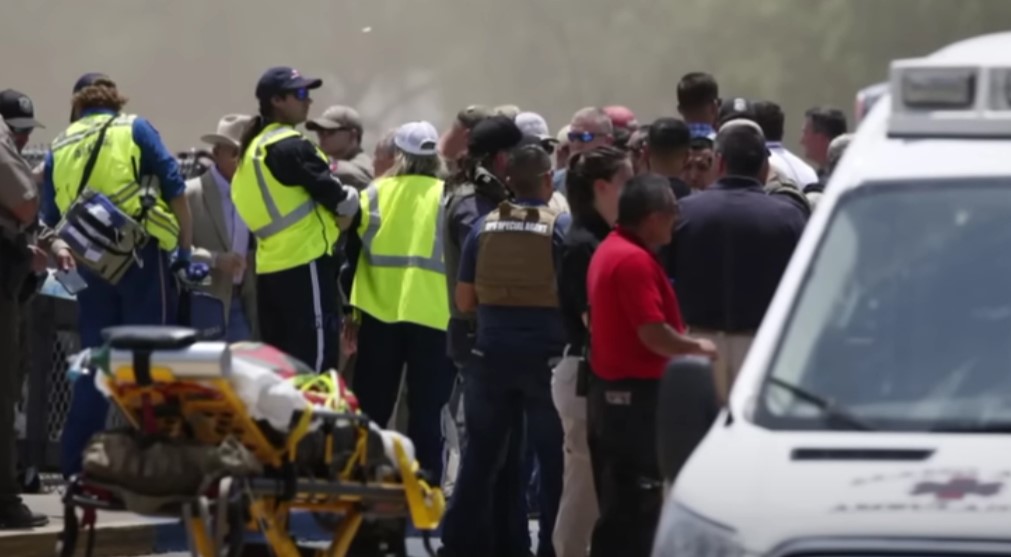 We know her not by her name, but by her deeds, and those are heroic. She aimed, shot and dispatched to hell one Dennis Butler, a career criminal, who was poised to do mass murder in West Virginia. A birthday-graduation party got too noisy for Butler’s liking.

She had a handgun; her opponent an AR15. More crucially, the Lady from Charleston had the male bits and the moral compass that upwards of 19 police officers, hunkered down at the Robb Elementary School in Uvalde, Texas, last month—all SWATTED-up and swaddled in Kevlar body armor—were without.

At the same time, the trapped children cried out to 911 as they were being mowed down. These babies screamed for grown men to quit cowering and pondering bureaucratic distinctions—active shooter or barricaded shooter—a distinction without a difference if the barricaded shooter is also holding the kids hostage and picking them off one-by-one.

Do not rest in peace, Uvalde Angels. Rage from the heavens

How overpowering is the instinct to worship. Lawrence Jones of Fox News showed himself a fool, looking to blame 911 for the Uvalde Police’s disgraceful failure to engage an active shooter. However, the protocol is clear. You go to the fight. Law enforcement is obliged to forthwith engage a known active shooter. An assault rifle was being fired feet away from the officers. The sound would’ve hurt eardrums. There was no communication breakdown; only a categorical refusal to respond to reality on the ground.

Cops had come a cropper, refusing to respond to reality on the ground, deaf to the cries and telephone calls of brave babies.

Absent keys, operating under the license of no-knock warrants— these state operators, whom we pay for protection, have no qualms about deftly deploying tactical entry equipment, such as battering rams, to kick in our doors on the slightest pretext, and without knowing what’s on the other side.

This time, the cops knew that on the other side of the door, starting at 11:33 AM, more than 100 rounds had been fired into classrooms 111 and 112. In fact, as the officers stood inside the school structure, at 11:37 AM, the shooter fired 16 more rounds.

Forgive the hyperbole, but the “I was only following orders” excuse for evil action or inaction comes with hefty historical baggage. For those whose education comes courtesy of American schooling, the reference is to the Nuremberg Defense.

A society is institutionally and systemically rotten, certifiably so, when the cries of little kids and women being blown to smithereens do not make grown men drop their poisonous progressive protocol and run to the rescue.

“‘Go in there! Go in there!’ women yelled at the police soon after the attack began.” It was worse. As shown in this YouTube clip, watched over 500,000 times, parents writhe in agony, crying like wounded animals caught in a trap as their flesh-and-blood is slaughtered within earshot.

What does the state do? The UniParty state workers–the cops, the SWAT–they do zip for the kids being killed, but turn to tase parents beside themselves with grief, all to prevent them from charging to retrieve their babies.

Meanwhile, Donald Trump and Ted Cruz proposed “hardening” the schools by creating one-door schoolhouses. Just you wait for a fire to ignite, the stampede to follow and the bodies to pile-up high before that single point of egress.

No, you can’t fix stupid. You can’t gussy it up. How are you gonna fix a teacher who, on spotting the gunman, runs inside the school and leaves the fortified door wide open for the shooter in-chase? You can’t. How are you gonna fix cops who have no urge to run to the rescue; but, instead, obey evil, unintuitive orders and turn on righteous parents?

The Stupid Party says, “Just arm the teachers.” You want to train and arm teachers and faculty staff members to protect your kids? Have you seen what falls under the category “teacher” and faculty? Seen the people who zealously inculcate ungrammatical pronoun illiteracy? Who promote and further entrench systemic anti-white racism and exotic age-inappropriate sexuality? Have you seen these mountains of flesh videoing themselves gyrating obscenely, sexual exhibitionists in flagrante delicto, under whose tutelage “sexual curiosities, once called perversions, flourish”? Give guns to the same “dedicated” pedagogues who took two years off for COVID?

Get your kids the hell out of US schools!

American schools, incidentally, are well capitalized. They have active-shooter training and security protocols in place. What they don’t have is decent human capital.

What was it that Oscar Wilde said about kindness? “She thought that because he was stupid, he would be kindly, when of course, kindliness requires imagination and intellect.”

In Uvalde and beyond, you are witnessing the systemic rot in what Michelle Malkin has dubbed “end-stage America.”