The Hague. Photo supplied
The Hague

Prime Minister's Rutte's recent statement about "our war" in Ukraine, is a "violation of the Constitution and therefore punishable", said PVV leader Geert Wilders.

According to Wilders, Rutte is illegally dragging the Dutch into a war. “It is not our war, Rutte and if you really believe that, you are in violation of the Constitution and therefore punishable.” Wilders referred to Article 96 of the Dutch Constitution, which states, “The Kingdom shall not be declared at war except with the prior consent of the Senate.”

A journalist asked Prime Minister Rutte during the weekly press conference after the Council of Ministers last week whether the Dutch were being drawn into a war that is not theirs. He answered that “that war over there is ours” with reference to Ukraine.

Very soon the hashtags “not my war” and “not our war” trended on Twitter. People also pointed out that the prime minister was breaking the law with this statement.

In violation of the law

“Rutte speaks about ‘our war’. So that is a declaration of war on Russia. But for such a declaration, he needs the consent of the Lower and Upper Houses according to the Dutch Constitution. With his statement, he is therefore in violation of the law,” explained journalist Joost Niemoller.

“A parliamentary debate on Rutte’s declaration of war seems the least he can do. Or are we going to pass in silence again and are we in a war without a word being exchanged?

Writer Leon de Winter demanded that Rutte resign. “Now that Putin knows this, the Netherlands is a target for Russian missiles from submarines and from the air. Rutte must take this back immediately and resign,” emphasised De Winter.

Philosopher of law Raisa Blommestijn also noted: “I wonder if the virtuous ones realise that Rutte’s statement that ‘the war in Ukraine is ours’ means slightly more than raising a Ukrainian flag or putting it in your bio.”

Ignoring the Dutch Constitution is becoming a habit for mainstream politicians

Member of Parliament Gideon van Meijeren (FVD) meanwhile asked the Foreign Minister 14 questions about the controversial Bilderberg conference. He answered none of these. Hoekstra hid behind Chatham House Rules to avoid scrutiny, but in doing so, also ignored the Constitution. 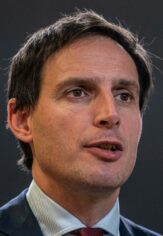 In 2009, leaked documents show that Wopke Hoekstra obtained shares in an offshore company based in the British Virgin Islands. He acquired more shares in 2013 and 2014, while he was a senator. Paul Tang, a Dutch centre-left MEP who chairs the European Parliament’s tax committee, argued in 2021 that Hoekstra should stay out of the EU tax-haven decision because of his off-shore investments.

According to Dutch Minister Wopke Hoekstra, Bilderberg does not determine who the next American president will be, but is that correct? Hoekstra is the Deputy Prime Minister of the Netherlands and Minister of Foreign Affairs.

Since 2002 the British rule has been: “When a meeting, or part thereof, is held under the Chatham House Rule, participants are free to use the information received, but neither the identity nor the affiliation of the speaker(s), nor that of any other participant, may be revealed.”

“I’d like to make it more exciting than it is, but there really isn’t a decision being made there about who will be the next football champion or who will be the next US president. It is not about that. Topics are exchanged and these are exactly the topics as listed on the website,” was the only thing Hoekstra wanted to say.

Van Meijeren said he should be given the tools to do his job as a parliamentarian and monitor the government. “That is not possible if the minister hides behind this and to my knowledge there is no Chatham House Rule that is above our Constitution.”

Sighing deeply, the minister promised to “fine-tune” and answer the parliamentary questions on this.

Even if Minister Hoekstra claims that the conference “does not decide who the next American president will be”, Bill Clinton was invited to the conference in 1991. Two years later, in 1993, he was elected President of America. Coincidence?

Angela Merkel attended the Bilderberg conference in May 2005. In November of that year, she was elected Chancellor of Germany. Another coincidence?

Emmanuel Macron attended the conference in Copenhagen in June 2014. Three years later, he became President of France. Still a coincidence? In May 1982 Helmut Kohl was invited to the Bilderberg conference in Norway. In October that year he took office as Chancellor. Probably just a coincidence.

Tony Blair was still relatively unknown in 1993 when he attended the Bilderberg conference. In 1997 he was suddenly Prime Minister of Great Britain. And there are many more examples. Margaret Thatcher took part in the Bilderberg Conference in 1975. Four years later she became Prime Minister.