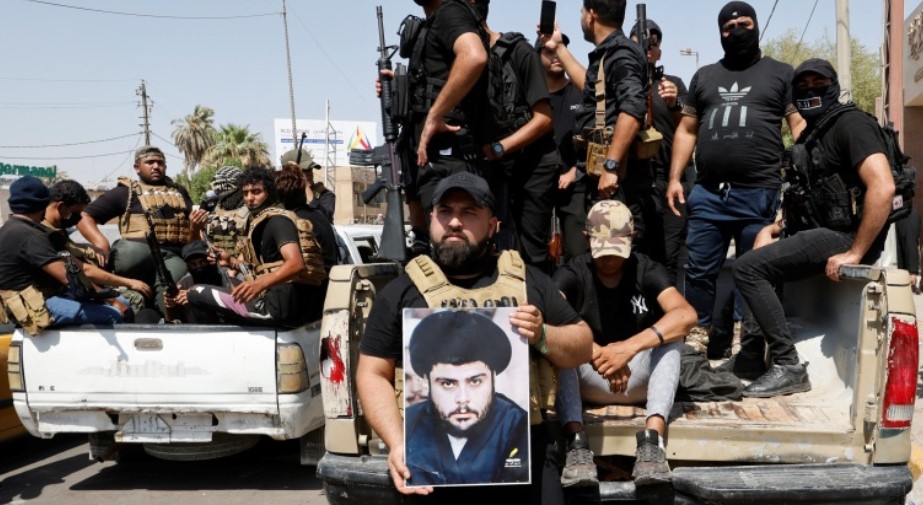 The latest death toll has risen to 30 Iraqis as Baghdad descends into chaos and violence, with another 390 protesters wounded from bullets and tear gas inhalation. In March 2023, it will mark the 20th anniversary of the US invasion of Iraq, and yet the country has never recovered and still has no stable democracy.

The Green Zone is a high-security area in Baghdad housing the Iraqi government as well as some foreign embassies. Security forces reported at least seven rockets fell in the zone yesterday.

Muqtada Al-Sadr gave a speech today asking his supporters to leave the area and go home, and he wouldn’t consider them as supporters if they stay. Reports on the ground say there is a movement to withdraw from the zone of conflict. Al-Sadr stated further that the Hashed al-Shabi was not involved in the clashes yesterday, and urged a return to calm. He said a revolution that includes violence is not a true revolution, and he criticized his supporters who may have participated in yesterday’s clashes.

The combatants are rival militias. On the one side are the supporters of al-Sadr, and on the other side are the Popular Mobilization group, as well as Iraqi security forces.

Civilians took cover in their homes as gunmen in pickups cruised Baghdad while gun and rockets fire was heard across the city last night.

The Iraqi oil sector provides about 85% of the government revenues, and in the aftermath of the war in Ukraine, Iraq has become a major supplier, but the increase in revenues has not been felt by the average Iraqi, and poverty and unemployment have been featured in the current unrest. The 2021 estimate was 4,161,500 barrels per day, but the country still doesn’t have full electricity and even basic services are not fully met.

Yesterday, Al-Sadr announced he was leaving politics, closing offices, and today in his speech he reaffirmed his decision to remain out of political life. It was his announcement that prompted his supporters to breach the cement walls of the Green Zone and storm the government offices.

A source speaking for Al-Sadr said later yesterday the cleric was on a hunger strike to stop the violence and use of weapons.

Iraq’s military announced a nationwide curfew yesterday, and the caretaker premier suspended Cabinet sessions in response to the violence.

US Embassy evacuated staff, and the Dutch Embassy staff moved to the German Embassy which is far outside the Green Zone.

Iran closed its land borders with Iraq yesterday and announced flights would stop as of today. Iranian state television urged its citizens to avoid traveling to Iraq, and those already there not to travel between cities.

Kuwait has urged its citizens to leave the country, while Dubai’s long-haul carrier Emirates stopped flights to Baghdad.

The Egyptian president, Abdel Fattah El Sisi, spoke last night in separate telephone calls with his Iraqi counterpart, Barham Salih, and the prime minister, Mustafa Al Kadhimi, the president’s spokesman, Bassam Rady, said in a statement. Al Kadhimi was on a visit to Egypt when the violence interrupted his stay. El Sisi assured Al Kadhimi that Egypt was ready to do everything possible to safeguard Iraq’s security and open a path for dialogue to end the current escalation.

Iraq has been in a deep political stalemate since legislative elections in October last year due to disagreement between political factions over the formation of a governing coalition, which has left the country without a new government, prime minister, or president for 10 months.

In October 2021, 329 legislators were elected to the Parliament. The acting Iraqi National Intelligence Service Director General Mustafa al-Kadami became prime minister in May 2020 after the previous prime minister resigned in late 2019 because of widespread protests demanding more employment opportunities and an end to corruption.

Al-Sadr is a prominent cleric, but also an Iraqi politician and militia leader, and led the Sadrist Movement. He had asked for all foreign troops to leave Iraq, both the US and its allies, and those from Iran. His militia has thousands of fighters, and millions of Iraqis support him. Many Iraqis see him as a symbol of resistance to foreign occupation.

After the assassination of Qasem Soleimani in January 2020 and the Iraqi parliament’s resolution demanding ‘Yankee Go Home’, Al-Sadr called for “the immediate cancellation of the security agreement with the US, the closure of the US embassy, the expulsion of US troops.”

The pro-Iran Coordination Framework, or Popular Mobilization Units (al-Hashd al-Sha’abi in Arabic), are militia units that have fought alongside the Iraqi military against ISIS since 2014.

Saddam Hussein was ousted from power in Iraq in March 2003 by the US invasion of Iraq, which killed hundreds of thousands, and destroyed the country’s infrastructure. He had been President since 1979 and was hung on December 30, 2006.

In October 2005, Iraqis approved a constitution that had been designed by the US occupation. The largest secular democracy on earth, the US, designed a government for Iraq which was not secular but depended on sectarianism. Iraq was a Shiite majority, as is Iran, and the US was determined that the Shiites would have a political advantage, and the US insisted that religious sects be the basis for the parliament’s representation.

The issue of Middle Eastern Christians was presented in a PBS report in 2011, “Why Did Assad, Saddam, and Mubarak Protect Christians?”

The report covered strong authoritarian leaders who ruled in a secular fashion, especially Saddam Hussein and Bashar al-Assad, who both ruled from the Ba’ath Party, which is a Socialist and secular political party.

Syrian, Iraqi, and Egyptian Christians were all afraid of Radical Islam taking over the country, after a revolution, or US invasion, and the result would be devastating for the Christian community.

In the case of Egypt and Iraq, after their strong leaders were deposed, both by US intervention, Christians suffered, and continue to suffer. Iraq’s Christian community has migrated abroad out of fear and oppression. Egypt’s Christian community has suffered attacks on churches by Islamic militants following the Muslim Brotherhood, who were supported by President Obama in the rigged election of Muhammed Morsi.

Only in Syria has the US invasion and regime change been resisted and thwarted. President Assad still leads the only secular government in the Middle East, where all religions are freely worshipped, and the constitution prohibits any political party from having a religious platform.