Two Iranian-born brothers have been indicted for selling vast amounts of classified information – of an extremely sensitive nature – to the Russian intelligence agency GRU. For the Armed Forces and the Security Police, it will be extra embarrassing because the brothers held several important positions in the most secret parts of the Swedish security apparatus.

The two Iranian-born brothers Peyman Kia, 42, and Payam Kia, 35, have been in custody for a year after they were suspected of sharing large amounts of top secret information from the Security Police and the Armed Forces with Russia.

The two brothers, who were hired as a result of a “diversity investment”, are now charged with gross espionage after potentially making millions of kroner by selling out Sweden.

According to the indictment, the buyer of the classified information, the scope of which is described as almost catastrophic for Sweden according to sources, is Russia and more specifically the Russian intelligence service GRU.

According to information from Swedish daily Dagens Nyheter, older brother Peyman Kia was working as a security chief at a government agency when he was arrested in a dawn raid in September 2021. At that time, he had already worked at the Security Police and the Military Intelligence and Security Service (MUST), and it is during this time period that he became a suspect.

He had worked at the most secret Swedish intelligence organization in Sweden, the Office for Special Collection (KSI), which works with extremely important and classified information, including abroad with agents.

After the elder brother Peyman was arrested, his younger brother, Payam Kia, was also arrested and detained in November 2021 on suspicion of aggravated espionage. According to sources to SVT, Payam had started police training, but never completed it. Despite this, he got a job at the Security Police (SÄPO) for unclear reasons.

According to steering documents drawn up in 2009 after the then moderate-led Reinfeldt government gave the Armed Forces orders to “increase diversity”, more immigrants got important positions within the country’s defence structures. Whether the two Iranian brothers received their respective jobs due to “diversity” quotas or preferential treatment, has not been established.

What could be established, however, is that they lacked loyalty to the country that received them and gave them sanctuary.

Sold out the country that welcomed them

According to the indictment, the two Iranian-born brothers, who came to Sweden as children from Iran together with their parents, “jointly and in consultation, during the period 28 September 2011 – 20 September 2021 within the kingdom, including in the Stockholm area, went to Russia and the Russian intelligence service GRU with the unauthorized acquisition, promotion and disclosure of information even as this leak to a foreign power could result in harm to Sweden’s security”.

The older brother acted as a so-called mole and infiltrated the security service. After that, the younger brother, according to the prosecutors, helped plan the crimes, but was also responsible for handling contacts with Russia and the GRU. It is Payam who is suspected of having handed over the information and received compensation and, according to the indictment, made extensive monetary transactions involving cash and gold. 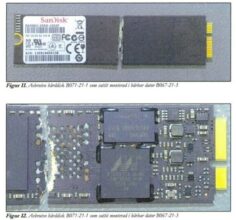 A broken hard drive with classified information on it that is used as evidence in the prosecution. Photo: Police preliminary investigation

Between September 2016 and July 2017, he handled at least SEK 380 000 in the form of dollar bills which, according to the indictment, come from a foreign power for information that the older brother stole from the authorities where he was employed.

However, much of the information in the preliminary investigation is secret, said the Public Prosecutor’s Office in a press release.

“It has been a complex investigation into a very difficult crime and the suspicion relates to a very serious crime directed against Sweden’s intelligence and security system. The crime is serious because it concerns conditions that are of great importance,” said chief prosecutor Per Lindqvist in a press release.

According to the indictment, the prosecutor invoked, among other things, several very serious security breaches against the two brothers, and they have been able to secure evidence in the form of computers, hard drives, mobile phones, phone lists, notes, USB sticks and large sums of money which, according to the indictment, they received from Russia to spy in Sweden.

Both brothers are now charged with aggravated espionage. Peyman Kia is also charged with being in possession of highly unauthorized information. The penalty includes life imprisonment. According to Expressen’s sources, the brothers’ suspected espionage has been described as “very serious, almost catastrophic in some respects”.

Both brothers denied the crimes.

The crimes of espionage and unauthorized position with a secret mission fall under what is known as a crime against Sweden’s security. Espionage, according to the law, is the intentional transfer, transmission or disclosure of secrets – such as defense matters – to a foreign power. The information does not have to be true.

The penalty for espionage of the normal degree is a maximum of six years in prison, while aggravated espionage carries a prison term of between four and eighteen years or life.

If there is no intention to help a foreign power, the crime is instead an unauthorized position with a secret mission. The penalty scale for such unauthorized acts range from fines to imprisonment for a maximum of two years. For serious crimes, the maximum sentence is four years.

One can also be sentenced for negligence with secret information, if the crime has been committed through gross negligence, according to TT, § 5–9, ch. 9 Criminal Code, Swedish Constitution.