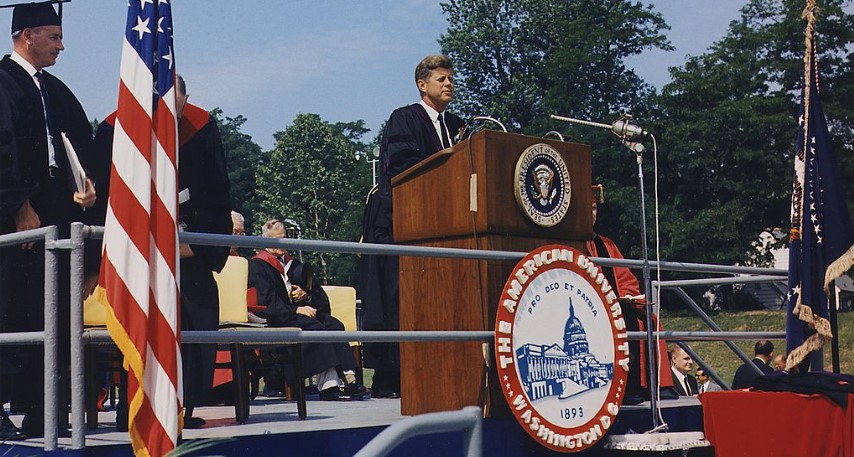 How troublesome presidents are disposed of

Tucker Carlson provides an excellent 12 minute report about the CIA’s removal of President Kennedy and President Nixon. I recommend that you watch it 2 or 3 times until it sinks in and forward it to all of your friends and relatives.

There is nowhere else you can get so much solid and important information in 12 minutes.

Carlson believes that Biden, no longer useful to the establishment, is currently undergoing removal.

I have reported the truth about the removal of Presidents Kennedy and Nixon from office for decades. It was thrilling to me to see after a half century Tucker Carlson give the same explanations to such a large audience. If Americans could only wake up and become involved it might be possible to save our country and the liberty of Americans.

President John F. Kennedy was murdered by the CIA and US Joint Chiefs of Staff once he realized that the government he headed was not the real government. His predecessor President Eisenhower, a 5-star general, warned about the threat to democratic government posed by the military/industrial complex. President Kennedy intended to do something about it while the president still had some power, but he was struck down before he could do more than fire CIA Director Allen Dulles and Joint Chiefs of Staff Chairman General Lyman Lemnitzer. President Kennedy wasn’t able to get rid of General Lemnitzer, who transitioned to Supreme Allied Commander of NATO. Both Dulles and Lemnitzer are suspected of directing the plot against Kennedy’s life.

President Nixon was the best informed and best respected abroad president of any in US history. He kept in touch with foreign leaders and was well informed about historical and current events. But he also, like Kennedy and Trump, over estimated the power of the president.

Nixon incurred the wrath, as I once again reported on January 19 of the military/security complex with his arms control agreements with the Soviet Union and his opening to China. The assassination of President Kennedy was so obviously an in-house murder, covered up by the CIA’s media whores and the Warren Commission, that the CIA dared not murder a second president. Instead, the CIA saw that one of its operatives was placed as a journalist at the Washington Post, a long-time CIA asset, never a newspaper, to head the “Watergate” investigation of President Nixon which was used to drive him from office despite Nixon being reelected by the largest margin in US history.

Donald Trump, being a real estate mogul, knew nothing of Washington or who really rules it. By declaring his intention of normalizing relations with Russia, he blindly took on the CIA and the subterranean rulers of the US. And again the media was used to get rid of him: “Russiagate,” two impeachment attempts, “January 6 Insurrection,” and now “Documents gate.”

Despite this clear cut undeniable evidence the Warren Commission ruled that Kennedy was shot from behind by Oswald, the patsy that the CIA had lined up to take the blame. Before Oswald could talk or be questioned he was killed in police custody by Jack Ruby (Jacob Leon Rubensein), a person whose presence is inexplicable, who was permitted by the police to be armed next to Oswald.

The bulk of the insouciant American population fell for this most improbable of all accounts, but many intelligent people did not. So the CIA did not dare murder Nixon physically. They used their Washington Post asset to murder him politically, as they used media to get rid of Donald Trump.

Americans who think they live in a democracy are out to lunch. Americans, so easily fooled time and again, are the reason we have lost our country and the freedom and the hope that it once represented in the world.

How many Americans understand that they no longer live in a free country, that they are the ruled subjects of they know not who? Voting is a cloak, a deception. No one the people prefer can be elected to the office of president. If, like Trump, he gets there unexpected, he is removed.

The founder of American civil liberty, Thomas Jefferson, warned us that freedom cannot exist more than 200 years before it has to be refreshed by bloody revolution. He overestimated the life of freedom.

Over the course of my life the meaning of freedom has changed. It no longer means what the Founding Fathers, today denounced as racists, meant, which was self-rule and freedom from oppressive government. Today freedom is the freedom of blacks to rob stores without prosecution, the freedom of the government and its media whores to censor and suppress truth, free expression, and free association, the freedom of government to arrest and imprison people who exercise their civil liberties as “insurrectionists,” the freedom of government and its media whores to brand truth-tellers as “threats to democracy” who are guilty of spreading “misinformation,” the freedom to take away the medical licenses of doctors who saved lives by using medicines banned by Big Pharma’s treatment protocols.

People born in recent decades have no idea how off the wall this is to someone who lived in the real America in the past. When my generation passes, there will be no one alive who knows what America once was.