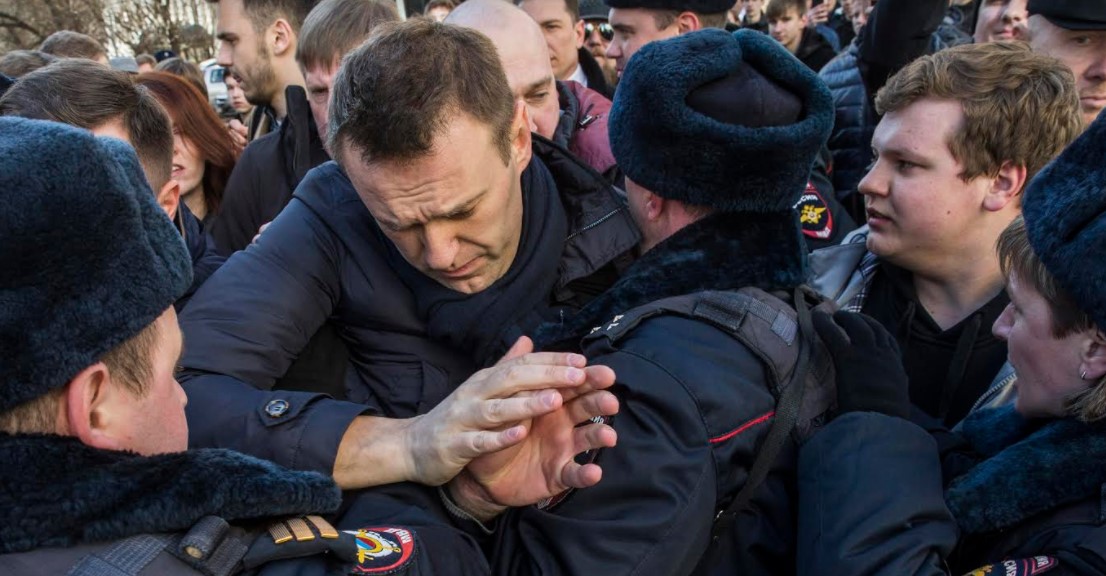 Navalny during a protest event: This is how the Russian liberal opposition figure likes to show himself. Photo: Wikimedia/Evgeny Feldman (CC BY-SA 4.0)
Berlin

The Navalny case: Poisoning or another occasion to heighten Russo-European tensions?

While events in Belarus were being sidelined in East European media, the end of August brought another burning topic – one of the main Russian opposition leaders Alexey Navalny mysteriously slipping into a coma.

On August 20, Navalny collapsed during the flight from the Russian city of Tomsk to Moscow. The plane made an emergency landing in Omsk, and the opposition figure was hurried to the intensive care unit of the Omsk hospital. After an extensive examination, doctors came to the conclusion that Navalny had a metabolic disorder, which caused a sharp drop in his blood sugar. While the Russian doctors could not determine the reasons that had caused such a condition, they found no poison or intoxicants in Navalny’s blood or urine.

Two days later, at the request of Navalny’s wife Julia, he was transported to the Berlin clinic Charité. At the present moment he is in a stable condition, and is being kept in an artificial coma with no immediate threat to his life. German doctors initially diagnosed his condition as intoxication with a substance from the group of cholinesterase inhibitors. Nevertheless, the statement by the Charité clinic includes no information of what specific toxic agent may have been used, and neither does it include confirmation that the patient was intentionally poisoned.

Not surprisingly, the main point of contention now is whether Navalny was intentionally poisoned or not. Representatives of Russia’s medical society rather doubt the hesitant diagnosis announced by the Charité hospital.

Chief anesthesiologist of the Russian Ministry of Health, professor Igor Molchanov noted that in the Omsk hospital, the patient Navalny did not have noticeable clinical characteristic of poisoning with the cholinesterase inhibitors, which have since been announced by German doctors.

“Since hospitalization, a large number of different drugs have been administered to the patient, which can distort the picture. Since then, for example, German doctors have been able to inject a drug to relax muscles for transportation and many other medications. As a result, the research carried out at Charité may be completely unreliable”, Igor Molchanov emphasized.

The Department Head of Toxicology, Extreme and Diving Medicine of the Mechnikov University, a PhD in medicine Viktor Shilov, noted that if Alexei Navalny had really been poisoned with cholinesterase inhibitors, then the doctors of Omsk would definitely have noticed that.

“The assumption about Alexei Navalny having been poisoned with substances that reduce the activity of cholinesterase is questionable, since the patient’s symptoms do not correspond to the signs of this type of intoxication. Poisoning by cholinesterase inhibitors has a specific clinical picture, and doctors simply cannot help but notice it. In case of more serious poisoning, breathing disorders in the form of shortness of breath are added to this symptom, as well as lacrimation, salivation, and sometimes involuntary urination. However, Navalny did not have such symptoms“, Viktor Shilov said.

Both Russian and German authorities insist on a necessity of a transparent and objective investigation of Navalny case – but there is no consensus of what should be done to implement such an investigation.

Presidential Press Secretary Dmitriy Peskov suggested that German doctors might have some additional information and suggested establishing an exchange of data and biological samples between doctors in Omsk and Charité. However, the German representatives ignored this appeal – it appears that they are intentionally avoiding any interaction with Russian doctors, although the specialists of the Omsk hospital provided the German side with full assistance in transporting Navalny to Charité and passed on all the necessary information about his condition.

Moreover, there is not so much difference in the treatment of Navalny in the Omsk hospital and Charité hospital – both Russian and German doctors happen to be treating him with atropine.

Dr. Leonid Roshal, president of the National Medical Chamber of the medical community, believes that doctors in Omsk saved Navalny’s life: “The Omsk doctors who treated Navalny worked promptly and professionally. They saved his life, so the critical attitude we see now from certain people towards Omsk doctors is absolutely unfair. I wish Alexey Navalny health and hope that when he recovers, he will not forget to thank the doctors who saved his life in Russia.”

While the Russian side has been calling for cooperation with Germany in order to provide a thorough investigation, German chancellor Angela Merkel has been dropping hints about analogies between the Navalny and Skripal cases. Such comparisons are however in short supply – Navalny, unlike the Skripal family, was not hiding in a foreign country. On the contrary: He has continually been in the sight of the public as well as media and has been actively taking part in events and meetings in various Russian cities.

In any case, there is no doubt that the poisoning of Navalny should be investigated as openly and transparently as possible by the Russian and now German side.

BerlinIn a risk analysis of Covid-19 rapid tests and PCR tests, Prof. Dr. Werner Bergholz came to the conclusion that all of the antigen test kits he examined contain several hazardous substances. Therefore, the "implementation is inevitably associated with risks for the health of the users and for their surroundings and the environment."

BerlinIn 2018, the President of the World Medical Association, Frank Ulrich Montgomery, rejected hand x-rays to determine the age of migrants, because this "interfered with personal rights". But forcing your own population to take an experimental injection is no problem for Germany's top vaccine Fuehrer.

NamurA court in Namur, an important commercial and industrial centre located in the Walloon industrial area in Belgium, has declared the use of the Corona passport in Wallonia illegal.

LisbonSocialist Prime Minister Antonio Costa last week announced that Portugal would return to the "state of calamity" on December 1 with reinforced measures to curb Covid-19 infections.

BernThe Swiss State Council for Health persecutes opponents of Covid passports and vaccinations, but are the members themselves vaccinated?