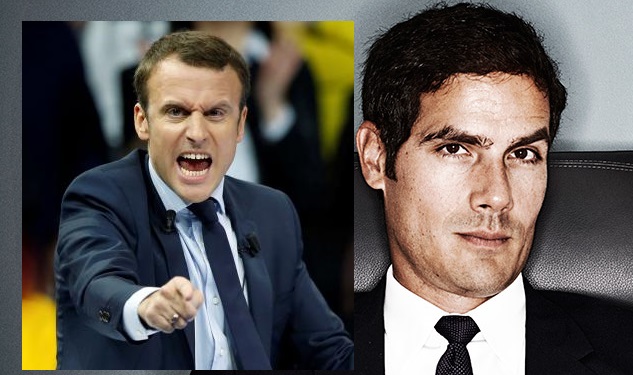 Ex-socialist candidate Emmanuel Macron is being groomed by the mainstream media as a serious contender to win France's presidential ballot in the first round and a favourite for a second.

But the former Minister of Economy in Hollande‘s socialist government and a current leader of his own independent party En Marche! has a strange sexual history.

Controversial details have emerged about Macron’s personal and professional life after rumours that compromising photos of Macron were stolen and its owner is planning to release them soon.

According to as yet unconfirmed reports, Macron is having an affair with the young executive president of the French public radio (Radio France), Matthieu Gallet.

Gallet is the youngest president ever of a major French public media outlet although he never graduated from a major French Napoleonic elite school. This is nearly unheard of in France, and very surprising since Gallet never demonstrated much aptitude for his job.

Rather, insider sources told FWM that Gallet got the job because he pleased the openly homosexual Frédéric Mitterand, Nicolas Sarkozy’s Ministry of culture.

The gay Mitterand promoted Gallet at the head of INA, the national video archive fund. A couple of years later, Gallet moved to Radio France as the CEO, to the disgust of the employees. After Hollande was elected in 2012, Mitterand left the scene and Gallet had to hastily find another political “mentor”. It is said that his choice fell on the promising Macron.

Republicans party lawmaker Nicolas Dhuicq told Sputnik News that Macron, who he suggests is a closet gay, could also be acting in the interests of the US financial market in France.

“Macron strongly supported the merger and relocation of the Technip group with its American competitor FMC. In a way, this operation turned out to be a transfer of a successful French company to American control,” Dhuicq says.

Macron’s career as an investment banker at Rothschild & Co is cause for concern Dhuicq says. “Throughout his career, he has been acting as an agent of the big American banking system. He has never been elected before running as an independent for the presidency, something very rare at this level of politics in France. I think that the guy’s only objective is [fulfilling] his personal ambitions, as he has no intention to pursue his political career if he loses the presidential race,” Dhuicq told Sputnik, adding that “the controversial details of his personal life and ties [will] soon become public”.

Le Pen has alleged that Macron is “under the influence” of Patrick Drahi, a Franco-Israeli telecom magnate, and also of “international finance”. Various Twitter accounts in support of the National Front have repeated these rumors.

“Concerning his private life, it is becoming public as we speak… Macron is a guy who is called a chouchou, or a darling, of the French media, which is owned by only a few people, as we all know. Besides, one of the guys who backs him is famous businessman Pierre Berge, a business partner and long-time lover of Yves Saint Laurent, who is openly homosexual and advocates gay marriage. There is very wealthy gay lobby behind him. This says it all,” Dhuicq said.

Even though the private lives of politicians do not normally influence elections, this one may different. At the end of last year, the polls showed that half of the French electorate considered that Macron would be a good president, but the latest scandal involving Macron and the very unpopular Gallet could change that.

Macron registers the second most voting intentions of the French electorate, behind Marine Le Pen. In the second round, his backers hope he will win the other candidates’ votes.

In November 2016, Macron publicly denied the persistent rumor that he’s secretly gay and living a “double life”. He also denied allegations circulated in the media that he used government money while a member of France’s cabinet to launch En Marche!

According to a survey by the pollster Elabe for Les Echos, published on Wednesday, Francois Fillon – also marred by scandal – would get at least 20 percent of the votes in the first round of presidential elections but would fall out in the second, while Macron is now credited with 22 percent and the National Front leader Le Pen polls at 27 percent.

Reuters reported that Harris Interactive showed voting intentions for the April 23 first round as Le Pen would get 24 percent, with Macron taking 21 percent. Fillon, who was favorite to win election only two weeks ago but has seen his campaign damaged by scandal, trailed on 19 percent.

The first round of the French presidential election will take place on April 23, with the run-off scheduled for May 7.