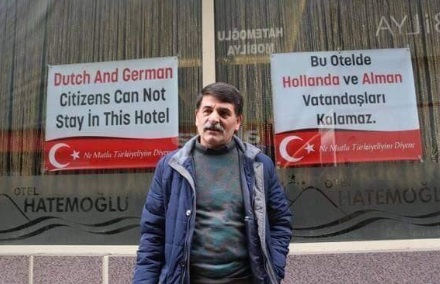 After the diplomatic crisis in The Netherlands and Germany with Turkey, a Turkish hotel owner has decided not to accept German and Dutch citizens.

The hotel owner says that German and Dutch citizens can not stay at the hotel, Turkish media reported.

Hotel Hatemoglu, which has been operating for a long time in Ağrı, has taken the tough stance to ban European visitors.

The owner took a radical decision to show his support after a diplomatic crisis erupted between the Netherlands and Germany.

The hotel management explained that German and Dutch citizens coming to Ağrı will no longer stay in this hotel. The decision was announced with posters in the hotel windows.

But this decision does not apply to expatriate citizens living in Germany and the Netherlands however. It only concerns Europeans.

In 2016, the number of people coming from Germany to Turkey decreased by 1,6 million. The number of arriving tourists also dropped by 2,5 million.

The figures are estimated to fall by half this year. It is a matter of curiosity how Hotel Hatemoglu in Ağrı will affect tourism by closing its doors to German and Dutch citizens.