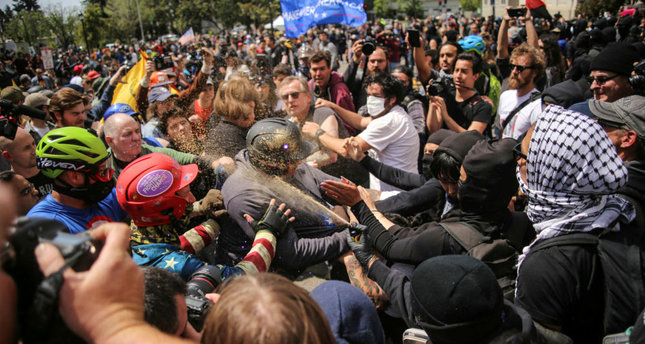 Various individuals in this picture were beating and kicking each other on Saturday 15 April 2017 in Berkeley, CA.

Battle of Berkeley: Patriots and Antifa in Weimar-style clashes

On 15 April, a “Patriots Day free-speech rally and picnic” organised by conservatives in Berkeley, California, was attacked by a large group of leftists armed with batons, pepper spray, smoke bombs and projectiles. At its height, running street battles between about a 1000 people erupted with local police mostly looking on.

Several incidents drew attention, including an antifa protestor pepper-spraying an innocent female conservative attendee. The mainstream media did not carry any reference to this incident but focussed on another involving prominent altright activist Nathan Damigo hitting a young woman in a video sequence that went viral on Twitter and other social media. The woman has been identified from her Facebook page as Louise Rosealma. However, it was clear that Damigo had been hit by her first and at first sight he could have thought that she was a man. On her Facebook profile Ms. Rosealma had posted before leaving for the antifa protest that she wanted to disrupt the “Free Speech” gathering and “bring back 100 nazi scalps”. As she put it:

“Headed to Berkeley to disrupt the neo Nazi white supremacist jerk circle today. Nervous at but determined to bring back 100 nazi scalps.” Following on the video and stills from the fight between her and Damigo, left-wing commentators were calling for his arrest by the police. However, in a photograph taken from another angle, it appears that Ms. Rosealma was wielding a broken bottle in her attack on Nathan Damigo. Other visual material shows her throwing bottles at those she considered her enemies.

The event attracted a number of prominent conservative and libertarian figures, including Lauren Southern, a young Canadian journalist, politician and activist. She was seen covering the gathering in headgear, goggles and a face mask, surrounded by a few burly supporters acting as her bodyguards. In an interview with Stefan Molyneux afterwards she also expressed her shock at the lack of police action against violent antifa protestors, saying:

“It’s going to be really scary to see how the media reports on this. I just turned on CNN a little bit and they are already reporting fake news saying that the police were there and saw things (through)… That didn’t happen. They were told to stand down. They weren’t there… So it will be interesting to see how the media spin this… because you’re right. The wider public is not willing to admit that we have militant communists shutting down people that disagree with them in the streets. They aren’t willing to talk about this sickness and problem that is on their side of the political spectrum, and until that happens things are going to get worse and worse and worse. This Berkeley rally I think was just the beginning of where our political discourse in America is headed.”

Antifa protestors all wore masks and black clothes, which led to some online comparisons between them and ISIS militants who are normally clad similarly. However, despite the violent behaviour of the antifa, including throwing rocks from high vantage points which could have led to fatalities, the conservative participants were not driven from the Martin Luther King Jr. Civic Center Park in downtown Berkeley, which was seen as a victory for the conservative/libertarian side. Lauren Southern tweeted:

WE WON THE BATTLE OF BERKELEY!!

Judging from her Facebook profile, the young left-wing victim of the protest, Louise Roseales belongs to at least two far-left anarchist groups. The exact extent to which anarchist and communist groups already control American campuses is not known, but it is signifcant that 500 masked antifa “black bloc” militia could be mobilised in Berkeley on fairly short notice. On various anarchist and Marxist websites, members of the movements were urged to find their way to the park and attack conservatives, or “bring back some nazi scalps” as Roseales so eloquently wrote on Facebook.

In Ferbruary this year, when a scheduled talk by Milo Yiannopoulos on the UCLA Berkeley campus was preceded by anarchist arson attacks, the Los Angeles Times reported:

“While so-called black bloc agitators have become a fixture of Bay Area demonstrations in the last decade, their appearance at Berkeley on Wednesday and otherwise peaceful demonstrations threatens to inflame tensions in an already polarized nation.

After learning that Yiannopoulos talk was canceled, President Trump tweeted: ‘If U.C. Berkeley does not allow free speech and practices violence on innocent people with a different point of view — NO FEDERAL FUNDS?'”

In his comment on the “Battle of Berkeley” on 15 April, altright spokesman Richard Spencer said:

“What a day, what a day! April 15, 2017, that will be one to remember. It might even be in history books at some point. I think it’s a day to remember because it reveals to us this new normal that we’re moving in, this new world, a world of politicised violence and a world in which two vanguards representing two sides of the political spectrum in the United States no longer saw each other as debating partners, or adversaries, and so on, but saw each other as two camps that fundamentally disagree, two camps that see one another as existential foes. And so… a kind of war took place…. We’re in a new political world of existential foes, of political actors occupying space, and so on. That’s where we are.”

Spencer was also scheduled to give a talk at the Auburn University campus, Alabama, today (18 April) which was cancelled by the university authorities, citing security concerns. However, in another videotaped talk on his Twitter account, Richard Spencer has vowed to make an appearance on the campus at 7.00 p.m., come what may, and to “engage” with students and other participants.

Within the current divided climate in the USA, especially on campuses that are dominated by the Left, his visit to Auburn University could lead to further confrontation.

In a novel reading of the situation, Spencer referred to federal support for the black civil rights movement during the 1950s where the National Guard was deployed to ensure that school desegregation took place, despite widespread opposition from the white Southern public. Likewise, Spencer argues, the federal government should now supply the security manpower to ensure that the constitutional right to free speech be protected in America, especially on university campuses.