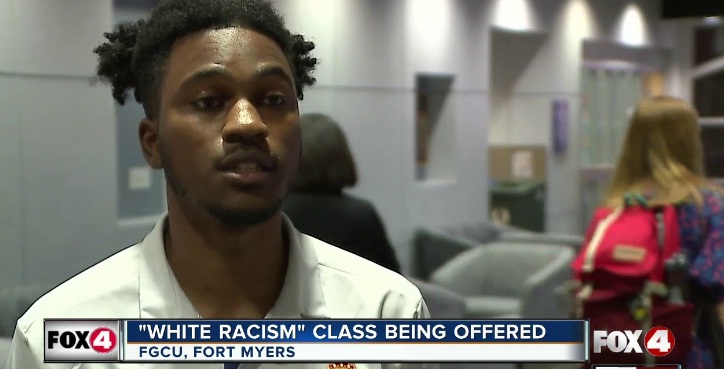 ‘White racism’ class at Florida University to be guarded by police

A "White Racism" class starting on Tuesday at Florida Gulf Coast University, will be guarded by police "as a precaution" US outlet, News-Press reported.

With the start of the Spring semester at FGCU, controversy is brewing about the sosiology course which has brought national US media attention to Fort Myers.

“We have prepared for any possible distractions related to Tuesday’s first class of the White Racism course, but we are expecting normal campus civility as our students engage in this and other courses at the spring semester’s start,” Susan Evans, FGCU’s spokeswoman and chief of staff.

Ted Thornhill, the black assistant professor of sociology who will be teaching the class, said students had “safety concerns” but most emails he received, only expressed disappointment over the course.

Thornhill said: “I think most of us don’t anticipate there being any unrest or protest or anything like that, but it’s more of a prudent measure to have law enforcement present just in case.”

A security plan was put in place after Thornhill had met with FGCU President Mike Martin in December. He would not say if police presence would continue throughout the semester.

“I don’t think that we would share many of those details for individuals who have negative intentions,” he said.

“I think that we will be safe and that students don’t have anything to worry about except for completing their reading and doing their work and engaging with the material.”

The course will offer ways to challenge “white supremacy”, its laws, policies and practices in the US that have allowed for “white racial domination over those racialized as non-white,” according to a course description.

The class is designed to show “the US has been and remains a white supremacist society,” the professor told Fox News.

Thornhill said, all white people “derive, in some measure, material and psychological benefits by virtue of being racialized as white” even if they are not racist.

One Twitter user wrote, “FGCU is now offering a ‘White Racism’ course, but if they offered a ‘Black racism’ or ‘Hispanic Racism’ course the school would get shutdown.”

Another Twitter user asked the school to instead create a ‘Black Criminality’ class.

FGCU, along with the state’s other regional institutions, is adversely affected by a “performance-based formula” because they have performed so poorly.

WashingtonOn Monday, with 49 US states and the District of Columbia electors casting their votes, Joe Biden obtained the 270 votes required to secure the victory in the 2020 US presidential election. At the same time, evidence has been filed in a lawsuit showing that thousands of votes in Antrim County Michigan, were illegally flipped from President Donald Trump to Biden.

A gene vaccine with nanoparticles? Many are starting to have doubts

BerlinThe “BNT162b2” vaccine developed by Pfizer and BioNTec, is a so-called mRNA vaccine hurriedly developed and brought onto the market with conditional approval. Above all, this vaccine is fundamentally different from all other vaccines used to date.

Vaccine makers may have been using fraudulent false positive diagnosis of Covid-19 in the control group to make a dangerous vaccine appear more efficacious.