Dutch State Secretary Ankie Broekers-Knol announced the annual crime data to the House of Representatives, and to no one’s surprise, asylum-seekers were revealed to be massively involved in crime.

In the past year they were more often involved in nefarious activities than the previous year. The increase in 2019 compared with 2018 is no less than 27 percent, Broekers-Knol told the Tweede Kamer.

Within AZCs [asylum reception centers], more than 17 000 crimes were committed, and almost 5 000 outside AZCs, according to Dutch daily, De Dagelijkse Standaard. This not only concerns thefts and burglaries, but also several dozen sexual crimes and two murders.

These numbers are worrisome, given that the total number of asylum-seekers has declined in the past few years. The current cabinet has thus been failing miserably with its policy of asylum and migration.

The VVD has been maintaining for years that they favor a strict quick-response policy, but in fact law enforcement never dare to follow through, unfortunately. Incidents have allegedly been recorded more accurately, they maintain.

The Cabinet is commissioning additional research into the increases in the number of incidents to obtain a “scientific” explanation since a number of reception locations have been closed, resulting in an increase in the occupancy rate at those locations.

The crime data among asylum-seekers are increasing because more and more asylum-seekers come to the Netherlands who have really no chance of gaining asylum since they come from “safe countries” like Morocco, Algeria and Nigeria. Within the walls of shelters crimes are often about “aggression and violence” against persons. And in almost a third of the cases reported, it concerns persons from these countries.

State Secretary Broekers-Knol has promised that she will be taking hard measures. She said that a special reception location for such migrants will be opened in Hoogeveen where they are no longer allowed to leave the site without permission. However, there is limited space for only 50 people.

Theo Hiddema is a Dutch lawyer and a member of the Tweede Kamer for Thierry Baudet’s party Forum for Democracy. Hiddema has outlined the solution to the problem of migrant crime in the Netherlands. 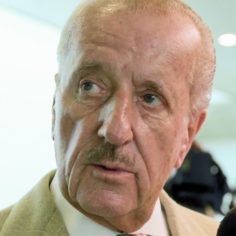 He said the Rutte administration offered no solutions.”It’s the same pattern over and over again. Somebody is accepted as a refugee, even though his first contact with the authorities […] indicates we’re dealing with an antisocial personality.

“That goes for all those ‘confused types’ who were accepted as refugees. They’re antisocial personalities. They don’t have a solid refugee story. They’re just here to check out how society here works… and leech off it. That’s it. And such people, as soon as they violate the law, you have to lock them up immediately.”

He said all criminal asylum seekers should be forced to seek self-deportation by means of detention. “It’s really simple: you have to put them in ‘temporary detention’. And then wait for them to say: ‘I want to go back to my country’.

“Because if they want to return, there’s no problem whatsoever. That goes for Morocco too, for Algeria. Sudan won’t be any different; it’ll be a bit easier, I think.”

Hiddema explained that the asylum seeker who is locked up in detention will rather take the initiative and leave. “Will I stay under lock and key, or do I go out the door?”

He said such people would choose to leave of their own free will. “Even though they’re involved in a criminal case, if they say they want to leave, there’s no problem, because you suspend the temporary detention, and you retract the subpoena or declaration of prosecution. That’s it.”

He explained the process: “Then there’s no criminal case and he can board the plane just like that. But you have to detain them after they committed a crime for which temporary detention can be imposed. Simply because of the likelihood of a repeat offense. And a flight risk!”