Even if the political debate over The Istanbul Convention is also a uniquely Polish debate about the conservative orientation of the country's domestic politics, the criticism against this Convention is more than justified.

There is certainly a reason why only 36 of the 47 member states of the Council of Europe have ratified this treaty so far. Countries such as Great Britain, Latvia, Lithuania, the Czech Republic, Hungary, Slovakia and the Ukraine are among those who have refused to sign the treaty.

The Istanbul Convention is an almost classic example of how the struggle against violence against women is strategically brought to the fore in order to promote a different agenda, since nobody would dare to contradict the main premise. The devil is in the detail, however  – in the small print of the treaty.

Such lobbies with an emotional bent, have long been used as a strategy by international organisations and treaties to promote a distinct change in the definition of gender. UN Women, the women’s political arm of the UN, adopted a new definition of women in its daily work long ago and thus, analogously, an extension of the right to represent the enforcement of LGBT rights.

The snappy formula on the website of the UN Women reads: “Gender equality and the abolition of violence against all girls and women, including lesbians, bisexuals, transsexuals and gender non-conformists must be achieved”. The chairwoman of UN Women, Phumzile Mlambo-Ngcuka – the scandal-ridden Deputy President of South Africa from 2005 to 2008 – declared that anyone who campaigns against violence against women and girls cannot exclude the LGBT community. 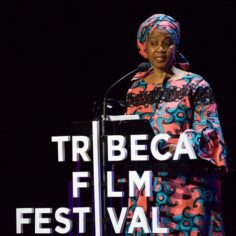 During Phumzile Mlambo-Ngcuka’s tenure as Minister of Minerals and Energy the parastatal company PetroSA made an advance payment of ZAR15 million (approx. $1.5 million) to a private company Imvume, which in turn made a ZAR11 million donation to the ANC ahead of the 2004 elections. Imvume has close links to the ANC. These events have been dubbed the “Oilgate” scandal by South African media. In January 2006 it emerged that the globalist puppet Mlambo-Ngcuka went with her family and a friend Thuthukile Mazibuko-Skweyiya in December 2005, on a taxpayer-funded holiday at the cost of ZAR4 million to the United Arab Emirates. This was dubbed the “Gravy Plane” scandal by the South African media. Photo: Wikipedia

The irony is that in South Africa, Phumzile Mlambo-Ngcuka’s constituents – the black population – is extremely hostile towards the LGBT community. It is one of the inside jokes in the “democratic” country which reveals the great divide between the puppet ANC kleptocracy and its voters.

This is the main problem of the Istanbul Convention: While it may be positive that governments want to use it to combat sexual harassment, rape, female genital mutilation, forced abortion, sterilization and forced marriage, as well as psychological and domestic violence against women, these acts were also previously prohibited by national and international laws and treaties.

So why should there be a new treaty?

In the contract there is also, for example, Article 3c, which includes a new gender definition for all signatories, in which such banal words as “woman” or “man” or even just the biological gender no longer appear. Instead, it says: “For the purposes of this Convention, the term ‘gender’ denotes the societal roles, behaviors, activities and characteristics that a particular society deems appropriate for women and men.”

This contradicts not only scientific findings and the views of the majority of the world’s population, but also all other definitions of “gender” in the previous EU treaties and national constitutions. With the convention, a pre-programmed collision between national and European legislation has been created.

As if that weren’t enough, Article 12.1 also states: “The contracting parties shall take the necessary measures to bring about changes in social and cultural behavior patterns of women and men with the aim of eliminating prejudices, customs, traditions and all other approaches that may arise the idea of inferiority of women or based on role assignments for women and men.”

The German government for example – one of the signatories – thus signed an agreement to take the “necessary measures” in order to change the “prejudices” of its population. Benevolent and non-violent German men – the majority –will soon discover that their previous notions of gender had been “wrong” and punishable because they no longer correspond to the current notions of “gender equality”.

The English translation puts it even more clearly, as it speaks of “stereotypical roles” for men and women to be combated. In 2010 already, the Council of Europe tried in all seriousness to ban the further depiction of women as mothers and housewives in the media across Europe, because this depiction of women was supposedly an example of “sexist stereotypes”.

What definition of a women will therefore be considered politically correct and free of prejudice?

According to this document, all ideas of family or marriage are to be abandoned as stereotypes of a binary “forced heteronormative” world view; they are prejudices and traditions and thus obstacles on the way to an all-encompassing gender equality, the way forward to a genderless utopia.

It is obvious why Poland does not want to sign this treaty. The real question is why countries would want to sign it at all.