Pier at Scheveningen where a youth was killed, The Hague, Netherlands. Photo: Nine Köpfer
Scheveningen

The Dutch town of Scheveningen has become something of the epicenter of the chaos and violence in the Netherlands. Enforcement personnel have been beaten with batons, and on the pier, people are shot and stabbed. There have already been several deaths.

The picturesque little coastal location is no longer what it once was, Dutch daily De Dagelijkse Standaard reported. The fishing village, swallowed up by the Hague, has become a paragon of violence, the breaking of Corona rules, and even murder. This week, a Rotterdam youth, who was stabbed on the pier, died. There are also videos to be seen where grown men with drawn pistols run back and forth and shots are heard.

And on the beach, it is the same story. When nobody is drowning in the sea, parking attendants are nearly knocked senseless with batons because they simply monitor compliance with parking and Corona regulations. The beach is used as a public trash bin, and any spot has become an open-air campground. The government cannot control the total anarchy, as it appears from all images and reports.

The municipality has been forced to send in forest rangers to restore some calm. A local political party in the Hague now calls Scheveningen a “free state, an El Dorado for troublemakers who can go around undisturbed.” The PVV said that this “last bastion of sobriety is going down the drain”, thanks to “weak left-wing administrators, including the VVD.” According to MP Machiel de Graaf: “This is the last straw.”

A few days ago in Nieuwe Meer in Amsterdam, on Saturday afternoon, around half past four, the 24-year-old Bas van Wijk from Badhoevedorp was shot dead. 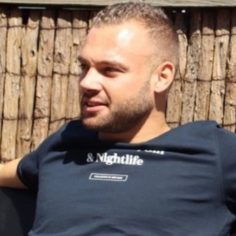 Bas van Wijk, killed in cold blood by a Turkish shooter. The police have been refusing to give a correct description of the perpetrator. Facebook

Van Wijk had come to the Nieuwe Meer with a large group of friends but a group of Moroccan men started a fight with them on a crowded jetty. One of the young men forced an acquaintance of Van Wijk to give up his expensive Rolex watch and threatened the Dutch group with a gun, according to friends of Van Wijk.

When Van Wijk said something about this, he was shot right in front of a play tower for small children, according to witnesses. The immigrant shot Bas a second time and as he fell down, the shooter walked over to the friend and took his watch.

The death of Bas – a white man – is said to have barely caused a stir, while George Floyd’s death in the United States sparked worldwide protests and dominated the media for months. PVV leader Geert Wilders tweeted: “Where is the fuss now?”

One of the victim’s friends said that the police have been “careless with the description” of the immigrant shooter. “Those guys had a light-coloured skin,” he said. “But the police wrote ‘light skin colour.” In a Facebook post, the perpetrator was described as “probably Turkish”. Despite this, the police still claim that they cannot give a description.

Meanwhile, the Burgernet tweet from 8 August described the perpetrator as “white”. It smacks of an ideologically motivated reluctance to describe the gunman.