Vincent Loquès, sacristan of the Basilica of Notre Dame de Nice, was beheaded by the terrorist. French media did not publish his photo. Facebook

Only a quarter of the French trust their government

The credit that the French give to the authorities in the fight against terrorism has fallen by 18 points since July.

The French seem to have lost all confidence in their government when it comes to the fight against terrorism. Indeed, according to a Fiducial/Odoxa poll for French daily Le Figaro, only 26 percent thought the authorities could protect them. It is down by 18 points since July and seven in a single week. The study was carried out just after the beheading of history and geography teacher Samuel Paty, and it’s a safe bet to say that the recent Nice attack would probably lead to an even lower number.

“For four years, more than 40 percent of the French believed that the government was capable of protecting them, with the exception of October 2019, the day after the attack on the Paris police headquarters (36 percent),” the authors of the survey noted.

“The various attacks affecting France over this period obviously had effects on this indicator, but they remained contained (7 to 8 points),” they added, with this edifying conclusion: “In this month of October, credit for the government on the terrorist question collapsed completely.” According to the survey, confidence has dropped from 44 percent in July to 33 percent on October 15. 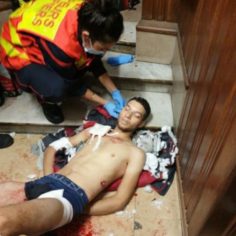 Not all cultures are equal: The Nice terrorist could count on First World emergency health care after he was shot. Brahin Aoussaoui beheaded two of his victims and attempted to do so with a third. The woman escaped and bled to death instead. Screenshot from Instagram

The Figaro poll underlined that 57 percent of French people believe that the police are “insufficiently present and visible in front of places of worship”.

Génération Identitaire (GI) meanwhile mobilized after the terrible knife attack Thursday, October 29, in the Notre-Dame basilica in Nice, perpetrated by a Tunisian “refugee”. Some 200 members of the organization marched on Avenue Jean Médecin – near the Notre-Dame Basilica. Equipped with a Nice flag, they sang the local anthem and the Marseillaise.

They paid tribute to the three victims of the terrorist attack. GI did not hesitate to reaffirm its anti-immigration and anti-Islam positions. They notably chanted the slogan: “Islam outside Europe.”

They laid a wreath near the Notre-Dame basilica, with the inscription: “Nice stand up, rest in peace.” The demonstrators then left the scene calmly. Police framed the protest from start to finish.