Danish Prime Minister Mette Frederiksen has warned that the Coronavirus was here to stay. She sees a bright future for vaccine sales globally. Over 206 million vaccine doses have already been dispensed and American pharma giant Pfizer has projected a profit of 15 billion for 2021. It is a very lucrative start for the Covid Industrial Complex.

In a video conference with EU colleagues, reported Danish Radio, Frederiksen urged fellow EU countries to build more vaccine factories since the current pace of vaccination was too slow. Every effort to obtain more COVID-19 vaccines, must be made Frederiksen argued.

She noted a “broad recognition” among member states that they were too dependent on vaccine producers such as Pfizer, AstraZeneca and Moderna and their production facilities. “We were on the brink when the epidemic came to Europe, where we did not have enough protective equipment. Now we are there again with a lack of vaccines, and we cannot have that”, she explained.

Frederiksen said the pandemic would demand persistent vaccination efforts globally. “I think we are looking into a realistic scenario where we need to vaccinate and maybe revaccinate the populations over and over and over again. And there we have to not to only provide enough vaccines for ourselves, but also for the Balkans, Africa and of course some South American countries.” She called it “problematic” that the EU was behind the US, the UK and Israel in vaccinating its population. 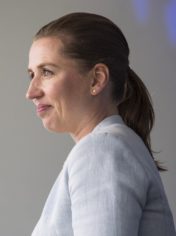 Denmark has begun developing digital vaccination passports in collaboration with the Danish Industry and the Danish Chamber of Commerce, the major driving forces behind it. Other EU countries, including Spain and Austria are also mulling forced vaccination. However, France and Germany have remained sceptical.

In Britain, the Queen suggested that people were selfish not to get the jab. In a video call with NHS officials in charge of the vaccine rollout, she said doubters should “think about other people rather than themselves” because it was helping “so many people”.

In the region of Galicia in northwestern Spain, vaccination against Covid-19 have become mandatory, The Local reported, after Galicia’s regional president Alberto Nuñez Feijóo held a press conference on the matter on Tuesday.

The regional government, which is expected to pass the proposal in the regional parliament shortly, has announced that the region’s 2,7 million inhabitants must take the vaccine, and that those who refuse will be fined from 1 000 to 3 000 euros in normal cases. In exceptional cases, where the person “may pose a risk or serious danger to the health of the population”, it will be considered a serious crime and the punishment will then range from 3 000 to 60 000 euros. The law does not provide information on which cases can be considered as serious, but it is subject to interpretation.

Spain had previously announced that Covid-19 vaccination would be voluntary, but decided in December that they would keep records of who took the vaccine and who did not. But Galicia has now introduced compulsory vaccinations.

The proposal has met with harsh criticism, including from the leader of the Galician Nationalist Party, Ana Pontón, who condemned it as an interference with civil liberties. It is unclear when the compulsory vaccinations will begin.

In the closing ceremony of the Australian Open tennis tournament, Tennis Australia’s chairman, businesswoman Jayne Hrdlicka, noted that “with vaccinations being rolled out in countries all over the world, it is now time for optimism and hope for the future”. But she was met by booing from part of the audience. Deputy Prime Minister Michael McCormack condemned the booing as “disgusting” and “un-Australian” in a television broadcast.

Serbia’s Novak Djokovic, who is world number one in tennis and who won the final that had just been played, has repeatedly expressed skepticism about the vaccination process – especially against the fact that vaccination may be required to travel internationally. However, he has denied allegations that he is against vaccination.

In wealthy Switzerland, even if the country procures enough vaccines, it also has to deal with a skeptical population. According to a survey conducted by the University of Zurich at the beginning of January, only around 50 percent of the population said they were willing to receive the Coronavirus vaccine. A full one-third of the populace said they would refuse to take the vaccine.

And there remains little enthusiasm for vaccines in France. The government has bought 550 000 doses of AstraZeneca, but only half have found recipients among general practitioners. The same mistrust has been seen in hospitals. “There’s nobody around. We have 100 doses, we’ve registered between 15 and 20 people” said Benjamin Davido, vaccine referent at the Garches hospital near Paris.

People fear the side effects and a lack of efficiency. Before the vaccination campaign started, French Health Minister Olivier Véran said people had no choice and would have to take any vaccine provided by the health services.