Why did the Ministry of the Interior not warn Germans of the coming floods?

Why were so many human lives lost during the floods in Germany? After initial criticism of the lack of warning messages from public television, the focus is now on the Federal Office for Civil Protection and Disaster Aid (BBK), which is subordinate to the Federal Ministry of the Interior.

As the London daily newspaper The Times reported, the hydrologist, Professor Hannah Cloke from the UK University of Reading, raised serious allegations regarding German civil protection and spoke of a “monumental system failure” in view of the many deaths and, in other cases, the seriously injured. Cloke herself is the co-founder and developer of the European flood warning system EFAS (European Flood Awareness System).

The first signs of a coming catastrophe were discovered via satellite on July 10, four days before the storm. The scientists then sent a number of very precise predictions to Germany. From this it was clear that the Rhineland was on the verge of “extreme” floods, especially along the Erft and Ahr rivers, as well as in cities such as Hagen and Altena.

The danger it posed to citizens was simply ignored by the authorities, responsible for the victims and the devastation.

In many cases, there were detailed warnings issued for certain places or districts, but neither the responsible authorities nor the media issued a warning to the people in the affected areas in Germany. In addition, Coke had emphasized that one should not only have warned, but also assisted those affected if they had questions about how they should behave and what they should do.

“I am terrified at the sight of people driving or wading through deep water. That is the most dangerous thing you can do in such a situation. [..] I would have expected that people would be evacuated, it is not expected that so many would die in 2021 from the predicted floods. It is indeed very, very serious, ” said the scientist, evidently very concerned.

Uwe Kirsche, spokesman for the German Weather Service (DWD) said the warning had been passed on to the municipalities and added: “As a federal authority, the DWD is not responsible for initiating evacuations or other measures on site” regarding “local events” just like the state media.

In the end, it appears that no one in power wants to shoulder the blame and once again it is the fault of the “climate” and, as is well known, the victims themselves are also to blame because they may have eaten meat, driven a diesel car or had too many children. 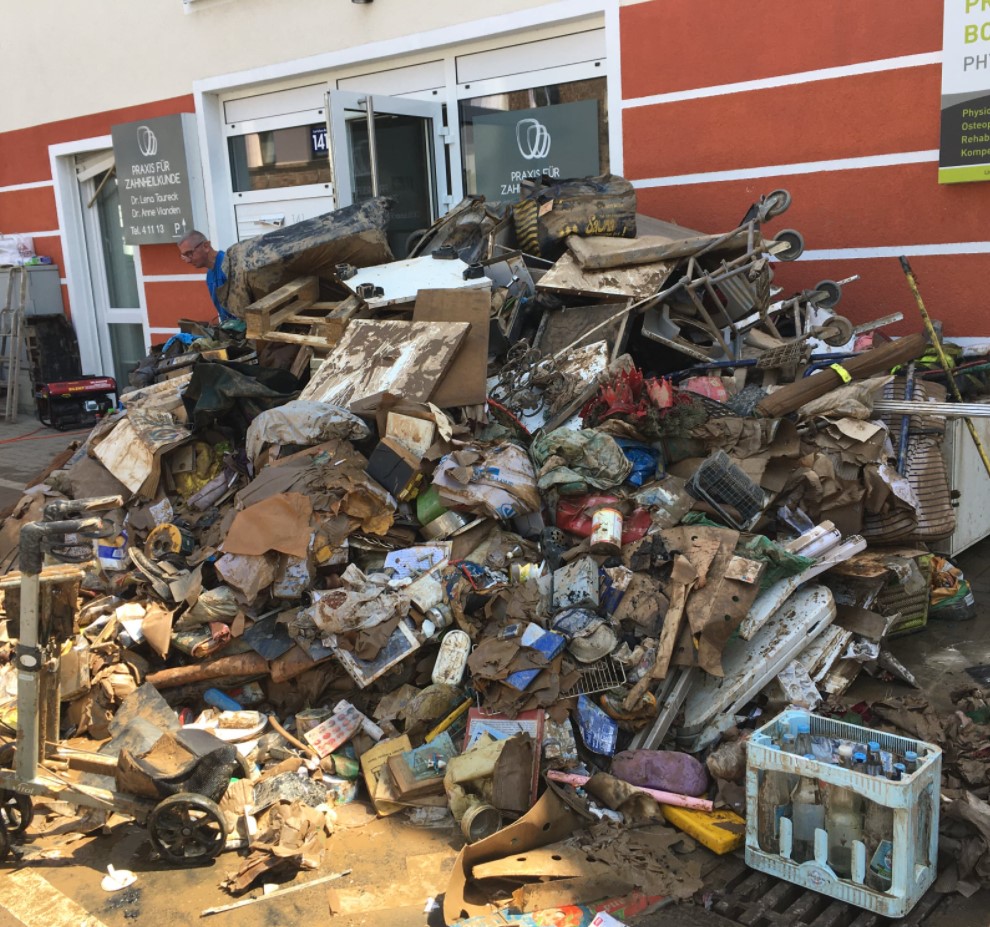 In the town of Erft, inhabitants spent the weekend trying to clean up the debris from the floods. Photo: Facebook

Germany does not have a “climate” problem as much as it has too many people in important positions who do not care about their own citizens.

Notably, dams were nearly full before the massive rains came. Those responsible knew about it and still refused to drain the water from the dams. At this point one can hardly speak of incapacity. Rather, the suspicion arises that the catastrophe was at least accepted with approval because the federal government had been informed of the impending storms – days in advance.

And now private individuals have to help with money, donations in kind and labour to aid their compatriots while Chancellor Merkel pushes ahead with her planned climate agenda. This scientific nonsense has been exposed too. It has rained before, often with worse consequences than currently. Persistent weather conditions, which increase the risk of massive rainfall, are no more common in the 21st century than in the past – regardless of climate change or penguin deaths.

The cause of the catastrophic consequences of the rainfall in July 2021 is the combination of increasing soil sealing in urban and rural areas with consistently weak drainage possibilities for the water.

Germans have moreover been mortified at seeing North Rhine-Westphalia’s Prime Minister Armin Laschet (CDU) laughing loudly during the visit of Federal President Frank-Walter Steinmeier (SPD) to the disaster area. In a video that could well cost him his political career, Armin Laschet, the designated candidate to replace Angela Merkel, had no choice but to apologize on Saturday. Earlier, while visiting the victims of the terrible floods in western Germany, which killed at least 141 people in the country, he had been filmed laughing merrily for several tens of seconds.

The images quickly caused controversy across the Rhine. Laschet was spotted fooling around during a tribute speech, delivered by the President of the Republic Frank-Walter Steinmeier. Standing behind the head of state, he is seen in the footage laughing for nearly 30 seconds, with six people joining in the hilarity. The controversy has grown even more bigger because he is responsible for one of the two regions most affected by the disaster, North Rhine-Westphalia, in the west of the country, where dozens of people perished and at least a thousand are still missing.

“Outrageous”, “disgusting” said people who saw the video, broadcast by the local television channel WDR. It was shared several hundred times on Twitter on Saturday, provoking the ire of social democratic politicians, partners of the conservatives in the government of coalition of Angela Merkel, and many Internet users.