As a reaction to Western leaders continuously inflaming the rhetoric against Russia, the Russian state broadcaster has now unmistakably brought up the possibility of Russian nuclear strikes against Western capitals in a video simulation.

According to Rossiya 1, the Russian ballistic missile of the recently introduced newest type “Sarmat”, which would be launched from the Russian exclave Kaliningrad, could reach Berlin in 106 seconds, London in 202 and Paris in 200 seconds. It is an open secret, which the head of the Kremlin openly addressed when he presented this state-of-the-art intercontinental strategic weapon, that the West currently has no means of defending itself against it. 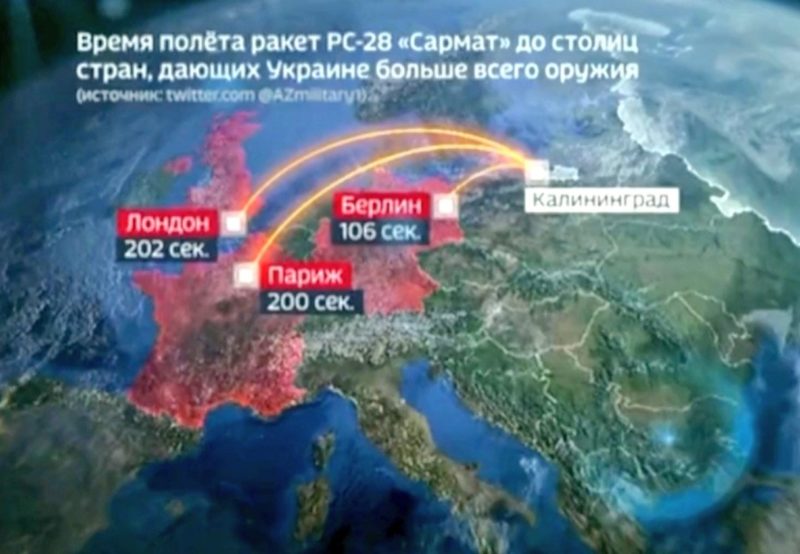 Screenshot of the Russian Rossiya1 programme on the range and speed of the RS-28 Sarmat intercontinental ballistic missile.

Moscow recently successfully tested its state-of-the-art RS-28 Sarmat intercontinental ballistic missile which is said to be able to bypass any existing air defenses. The US and its NATO allies currently have no hypersonic weapons in service.

A graphic showed in the programme (see picture) how Russian missiles can reach for example London within a very short time. “You have to look at this picture. Count the seconds! Can they do that?” a guest in the video commented and, addressing the West, added: “You don’t understand it any other way!”

Clearly, in the case of such an attack, there would be “no survivors”. According to the British Daily Mail, the Russian broadcaster is apparently reacting to statements by British Defense Minister Ben Wallace, who has been advocating attacks on Russian infrastructure facilities.

UK appears to lead the warmongers

Great Britain was given a special mention by Rossiya 1, in blaming it for a particularly aggressive war policy. In another programme, the scenario of an attack with the Russian underwater drone Poseidon on the British Isles was presented – the drone can carry nuclear warheads of up to 100 megatons when loaded. There is no defense against it in this case either.

The moderator explained: “The explosion of this thermonuclear torpedo off the British coast would trigger a gigantic wave of up to 500 meters in height. Such a squall of water is also a carrier of extreme doses of radiation. If it sweeps across the British Isles, it will turn what’s left of them into a radioactive desert.”

British Foreign Secretary Liz Truss has not backed down. Just last week, Truss formulated the new British war aim of completely pushing back Russian troops from Ukraine, including Crimea, which voted to join Russia in a referendum organized by Moscow in 2014.

NATO’s strategy of conducting a proxy war against Russia, is however fraught with very serious consequences for alliance members.

The United States, France and Great Britain are increasingly departing from the principles set to avoid conflict between nuclear countries “alongside the whole of NATO, which is positioning itself as a nuclear alliance,” a senior Russian diplomat underlined.

Director of the Foreign Ministry’s Department for Non-Proliferation and Arms Control Vladimir Yermakov told TASS that Western leaders should come to their senses. “It is imperative to reaffirm the principle that the risks of a nuclear war that must never be unleashed must be minimized, in particular, by way of preventing any armed conflict between nuclear powers. Russia strictly abides by this principle,” Yermakov said.

“Speaking about dangers emerging in current conditions, I would like to note that it would be useful for US-led Western countries gripped by unprecedented Russophobia to remain clearly aware that the irresponsible escalation of their anti-Russian actions is totally unacceptable,” he added.

The US has abandoned strategic dialogue with Russia on updating the Strategic Offensive Arms Reduction and Limitation Treaty (New START), he said. “We proceeded from the fact that it would help create pre-requisites for a constructive dialogue and eventually, possibly, for drafting specific accords,” the senior Russian diplomat explained.

“However, the Americans interrupted this interaction under the pretext of developments around Ukraine. We took note of this,” he said.

As a reminder, the US has deployed land-based intermediate-and shorter-range missiles in Europe and the Asia-Pacific region to further escalate the situation and whip up an arms race.

Yermakov told TASS that in itself, the creation of hypersonic armaments does not contradict any international treaties.

In the current issue of the Swiss weekly Weltwoche (No. 17/22), former SPD leader Oskar Lafontaine sharply criticized German Chancellor Olaf Scholz’s Ukraine policy: “If it is not possible to reach a negotiated peace soon, the danger of a nuclear war will increase, because those responsible in Moscow have their backs to the wall and the gamblers in Washington have believed for years that a nuclear war could be limited to Europe.”