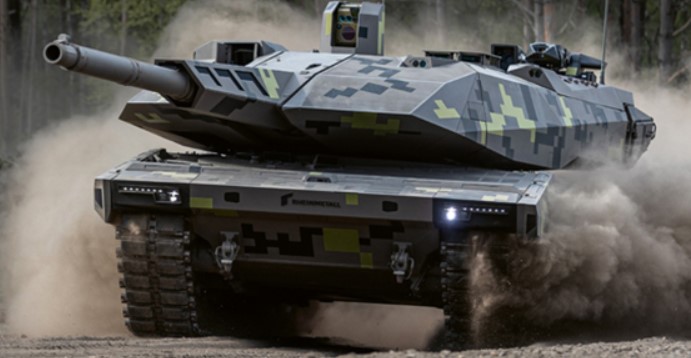 Germany's leading armaments manufacturer Rheinmetall has landed a surprise coup at the Eurosatory 2022 armaments fair. It presented the public with a complete new main battle tank, which is being touted as a technical answer to the world's currently most advanced tank, the Russian T-14, also known as the Armata.

The new tank project operates under the product code KF51 – but Rheinmetall presented the new tank to the public under a surprising name: Panther. Its forerunner was used during the Second World War.

The Wehrmacht used it from 1943 onwards but its weight caused logistical problems, such as an inability to cross certain bridges, even though the tank had a high power-to-weight ratio which made it very mobile.

Interestingly, the old Panther tank was one of the most expensive tanks to manufacture. Using forced labour on the production lines greatly reduced costs, but also greatly increased the risk of sabotage. French-army studies in 1947 found that many of these tanks had been sabotaged during production.

The new KF51 is meant by Rheinmetall as a relatively short-term response to changing armament needs and is to be available before Western tank manufacturers develop their answer to the Russian T-14.

But notably, Rheinmetall now puts the Franco-German Main Ground Combat System (MGCS) project at risk in moving ahead with the new prototype.  The MGCS has long been mired in political bickering. During 2020 bilateral talks with his German counterpart, the Italian Undersecretary for Defence Giulio Calvisi said that the possibility of allowing Italy to participate in the Main Ground Combat System programme emerged, but then Italy offered participation in its own development to Poland, and potentially to Spain.

In 2020, the Dutch government asked France and Germany to become an observer. However, both countries were still negotiating the conditions in which to allow other countries to take part in the project.

In 2022, the Belgian government increased defense spending. Part of these plans includes participation in the Main Ground Combat System programme.

On 4 January 2020 Poland was reported to have been excluded from the project and Warsaw ordered M1 Abrams from the United States in 2022.

Early in 2021, the United Kingdom entered talks to be allowed into the project as an observer, looking into options for the future replacement of their Challenger 2 force but as of 2022 Challenger 3 is in development.

On 15 October 2021 Sweden asked to be included in the project as an observer.

European analysts have previously insisted that all countries modernise their tank stocks relatively promptly in view of new challenges, and they now ostensibly have an alternative in the form of the Panther. American media outlets have however questioned the need for a new tank like the KF51, especially an “expensive” one.

In terms of design, the KF51 is based on the Lynx infantry fighting vehicle – also developed by Rheinmetall – but is heavier, larger and more heavily armed than the latter. The new Panther weighs 59 tonnes, which is less than the Leopard 2, and is equipped with a 130 mm calibre combat vehicle gun instead of the previous 120 mm gun. Experts believe that the new main battle tank will also have its own drone and a remote-controlled turret without a crew. There is also talk of other specifications depending on customer requirements.

The Franco-German tank project MGCS now hangs in the balance because of the KF51. After all, many buyers who will opt for the Panther are unlikely to switch again ten years down the line, when the MGCS project is supposed to be finalized. At the same time, pressure on the MGCS project is growing – the higher costs and the later delivery must now be measured against the Panther.

At Eurosatory, the consensus is that Rheinmetall has primarily promoted its own business with the new tank design, but it clearly also has some geopolitical implications.

Therefore, technological innovation appears to be the only way to safeguard sovereignty. Germany’s central and southern regions have forested hills and mountains cut through by the Danube, Main, and Rhine river valleys, but in the north, the landscape flattens out to a wide plain that stretches to the North Sea.

In such a geographical situation, tanks provide a unique combination of mobility, firepower and protection, and are crucial for defending territory.