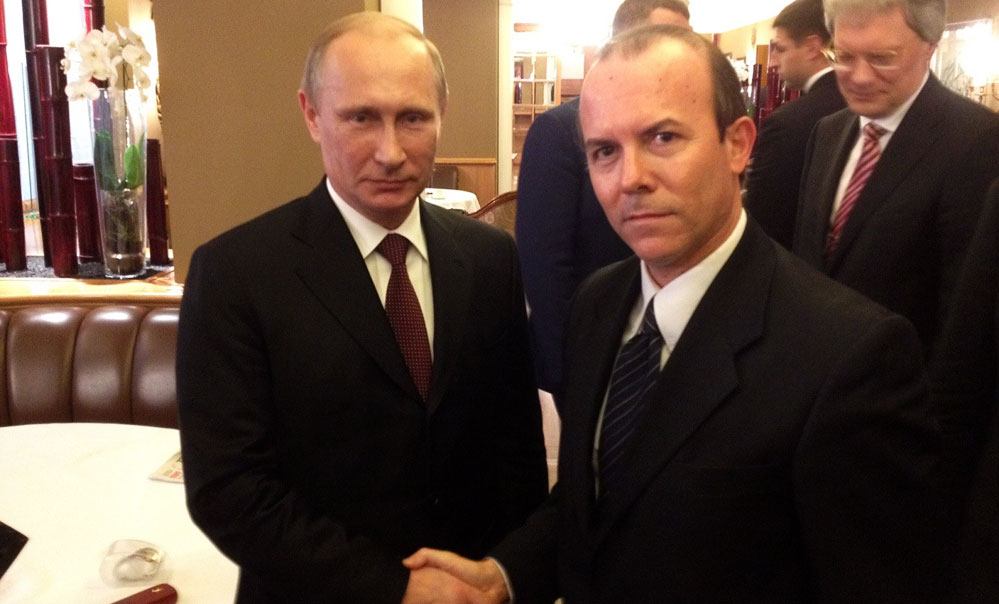 Gianluca Savoini is the president of the Lombardy-Russia Association and close advisor on Russian affairs of the leader of the Lega Nord party, Matteo Salvini. Here with Vladimir Putin.
INTERVIEW

Gianluca Savoini: ‘EU is the embodiment of globalism’

Marine Le Pen visits Putin, Frauke Petry visited recently the State Duma in Russia, the Austrian Freedom Party and Italy's Lega Nord signed agreements with Moscow's governing United Russia party. Gianluca Savoini is the president of the Lombardy-Russia Association and close advisor on Russian affairs of the leader of the Lega Nord party, Matteo Salvini. In an exclusive FreeWestMedia-interview he speaks about the importance of positive relations between the Euroskeptic movements and Russia.

Savoini: The sanctions against Russia are a disaster for the Italian economy. They have caused the loss of about six billion Euros. An Italian government favorable to defend the interests of its people would lift the sanctions immediately. But it is a government that serves the interests of the large financial lobbies and it shows total obedience to them. I am sure that EU will unfortunately prolong the anti-Russian sanctions and the disaster will continue.

At the same time there is growing opposition against the sanctions in Italy. Even former Prime Minister Matteo Renzi expressed criticism several times. How serious is that opposition by the Italian government?

Savoini: Renzi is gone, but I never thought for one minute that Renzi would have lifted the sanctions against Russia. He is only a talker and he says everything – and later even the opposite. He has always done so and even his party got tired of him. His successor Gentiloni is his poor imitation: in words he says that the sanctions have to be discussed, but in the end he votes as decided by Brussels. These governments of the left say one thing, but then they do the opposite.

How is the public opinion in Italy when it comes to the politics towards Russia?

Savoini: The Italian people are not hostile towards Russia. They have known for many years that there is no longer the Soviet Union. Generally they love the most famous Russian cities such as St. Petersburg and Moscow. The Russian composers, the great writers such as Dostoevsky and Tolstoy, the Russian ballet, caviar and vodka – these things are all very popular in Italy. You can’t find ordinary people who are in favor of economic sanctions against Moscow,  because they do not understand why. Conventional wisdom!

In May 2016 the Veneto Regional Council voted for the resolution, calling the EU’s policy towards Crimea “discriminatory and unjust” and urged recognition of the results of the referendum establishing Crimea as part of Russia. The Veneto parliament intended as well to “demand the immediate lifting of useless anti-Russian sanctions, which have negative impact on Veneto’s economy”…

Savoini: Not only Veneto but also Lombardy approved a similar document presented by Lega Nord. The centralist government in Rome did not appreciate this document, but the two most important regions of Italy – the regions that together produce more than 20 percent of the Italian GDP – confirmed the policy of Lega. Veneto and Lombardy in the autumn will hold an autonomy referendum, and this will be an important occasion to be in the position to adopt a foreign policy which is not obedient towards Brussels.

Italy’s main opposition leader Matteo Salvini from Lega Nord is one of the most popular supporters for good relations with Russia. You accompany and advise him. What is his motivation?

Savoini: I have known Matteo Salvini for 25 years and when he became secretary of Lega Nord in December 2013, I was invited as a guest of a parliamentarian of United Russia, Viktor Zubarev, and Alexey Komov, the Russian representative of the “World Families Forum”. A few months later I was with Matteo in Moscow where we visited the State Duma and we were as well in Crimea to meet President Aksionov. Lega Nord has always defended the cultural identity and the principle of sovereignty. In 1999 for example, Lega was the only Italian party that opposed the attack of NATO against Serbia and I remember very well how I personally went to Belgrade when it suffered NATO-bombardment.  Salvini has reinforced these ideals trying to strengthen the bonds of friendship with Russia. Russia is now the “old Europe”, the Europe of values, of peoples, and tradition. The EU is the embodiment of globalism bureaucratic service. 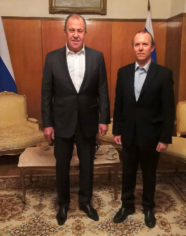 What steps did Salvini and you envision to better the relations?

Savoini: On March 6 this year in Moscow, Matteo Salvini signed a cooperation document with the United Russia party. On the same day we had the great pleasure to be received by Russian foreign minister Sergey Lavrov. This meeting was very important for us. Soon we will return to Moscow for another important political meeting. We have seen that even Frauke Petry and Marine Le Pen went to Moscow recently and this shows that a new Europe is being created in these days. This new Europe seeks friendly relations with Russia and looks with hope at the new American president Donald Trump. The New World Order is finally collapsing, even though its supporters are still strong. But history can not be stopped.

Germany’s chancellor Angela Merkel is the European spearhead when it comes to the confrontation with Russia. Liberal media call her nor the “leader of the free world”. What is Salvini’s attitude towards Merkel?

Savoini: Lega Nord appreciates really nothing about Merkel politics. She represents the worst of EU: Merkel wants more immigrants, she wants to continue the sanctions against Russia, she is in total service of NATO, she is against national sovereignty and traditional values. We don’t like Germany’s Merkel at all because in my opinion it is not the real Germany. And thanks to Merkel also the current Europe is not the real Europe. We hope to witness a faster growing alternative to Merkel, a German alternative for German people. We want make Europe great again. Together.