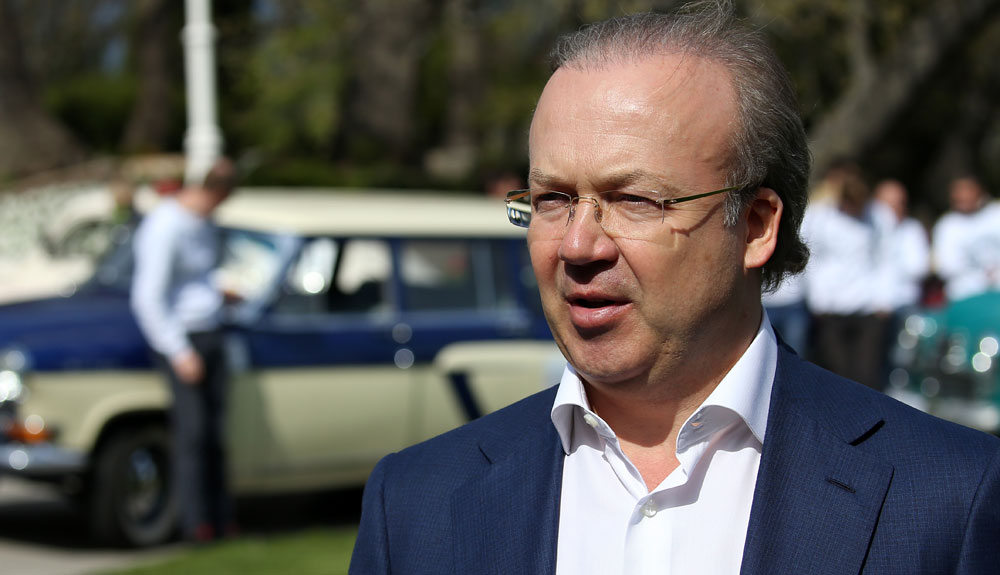 ‘Crimea can soon be the Russian Monaco’

Mr. Nazarov, many European MPs and MEPs attended to the Yalta International Economic Forum 2017 (YIEF). Officially Europeans are told by their authorities not to enter Crimea because it is called an “occupied territory”. Do you see it as a success that more and more Europeans are not obeying Brussels’ orders?

Nazarov: Sure there’s every reason to say that we’re seeing positive trends: The forum has brought a real breakthrough in Russia’s relations with other countries. Every year we’re acquiring new allies from abroad who come to Crimea and then go back and tell their people about what the situation is really like here and that is definitely very positive.

We have to remember that investments in Crimea mean cooperation and investments in Russia and that means huge opportunities for international business.

This year, despite the difficult political situation, the sanctions and a lot of political pressure, leading politicians and big business representatives (more than 200 delegates) from 46 countries came to “build bridges” with Crimea. We had delegates from Italy, Austria, Germany, France, Romania, Cyprus, Greece, the Czech Republic, Ireland, Switzerland, Turkey, China, Japan, Vietnam and other countries.

It should be noted that every year we’re seeing delegates from an ever increase range of the political and business spectre, and every year more and more important people are coming. In addition to investors and entrepreneurs who are interested in doing business in Crimea, we’ve got members of the European parliament, members of national parliaments and regional councils, representatives of major political parties and the executive branch, municipalities, most of whom hold important management positions in their organisations.

Crimea is an integral part of Russia because it was the choice the Crimeans made in a democratic referendum in 2014. So it’s pretty clear that this increase in the interests foreigners are taking in the Yalta International Economic Forum, stems from the fact that they share the position of the Crimeans and that there are a lot of people in the EU who disagree with Brussels’ official policy. Business does not want and should not lose money to serve somebody else’s interests. Business must grow and make money, seeking out new area of cooperation and new markets. In effect, foreign participants in the Yalta forum are campaigning for an end to the sanctions against Russia and, in all probability, are bringing it closer.

Nazarov: It’s not just Russia and Crimea that are incurring losses because of the sanctions. Preliminary estimates suggest the EU’s budget is losing some 60 billion EUR. The EU has lost some 400 000 jobs while their output fell by EUR 17.5 billion. This is one of the reasons why European businesses are going to Crimea to build relations. In this sense, our forum gives investors and politicians an opportunity to visit the peninsula and see with their own eyes what the business climate there is like. When they go back, they’ll tell their compatriots how Crimea is developing, how to do business here, what opportunities exist here for specific projects. This dialogue will help establish cooperation and trade. Think about it: This year more than 30 agreements worth over 100 billion RUB were signed at the form and a lot of Crimean cities became sister cities with foreign regions.

In addition, at the forum our foreign delegates suggested creating an international club of friends of Crimea, a unique proposal that’s already been drafted on paper. The idea is to set up an organisation for foreign citizens that care about Crimea and its residents and who support their choice. The main mission of the members of the club will be to promote Crimea and get it involved in international economic and cultural cooperation. How would you describe the business opportunities for European commerce especially in Crimea?

Nazarov: In my opinion, Crimea is one of the best territories for European business. There’s still growth potential here for traditional European markets such as tourism, agriculture, wine making and many others. The peninsula offers the same basic conditions as in Europe but there are several orders of magnitude less competition. One example is yachting. The French Riviera and the Italian coast are already packed full of white yachts, it’s practically impossible to penetrate that market but in Crimea yachting is still a relatively new business with plenty of growth potential. Or take farming, a popular and profitable sector but Europe doesn’t have much land left for it, and Crimea does. Crimea also offers huge opportunities for industry, after all its strategically position in the middle of Europe at a crossroads of several important transport routes.

Everybody understands that the sanctions will end sooner or later and truth be told the way I see it the much greater risk for European entrepreneurs is that a lot of them may lose precious time right now and somebody else will beat them to it and occupy all these vacant niches that exist here today. Manuel Ochsenreiter and Andrey Nazarov after the interview.

Crimea still suffers being “cut off” from the Russian motherland. Right now the only way to get to Crimea is via plane to Simferopol airport for Europeans. How is the infrastructural development in general?

Nazarov: At the moment the bulk of investments being made in Crimea are aimed at developing the regional infrastructure and improving logistics to ease trade and transportation of cargo from the mainland as well as to attract more tourists. By late 2018 when the Kerch bridge opens, the new passenger terminal at Simferopol airport will go into operation as well and let me tell you it’s got every chance at becoming the new architectural avatar for Crimea. I mean, next year, the peninsula’s throughput capacity will exceed 24 million passages. Businesses see a lot of opportunities in that, seeing how all these people are going to need accommodation, so naturally both Russian and foreign developers, global hotel and restaurant chains are already flocking to Crimea to capitalise on that.

What is your “vision” of the future of Crimea?

Nazarov: In the three years that the peninsula has been part of Russia, it has changed beyond all recognition: massive work has been carried out to restore the infrastructure, ensure economic stability and attract investors and those are all things that were allowed to go to waste while Crimea was in Ukraine. I am convinced that as soon as the sanctions and other political restrictions are lifted, Crimea will experience a huge investment boom.

Over the next several years, thanks to state programmes and the support we’re getting from the investors that are already working to develop the region, we expect to see two-fold growth of the economy and drastic improvements in infrastructure and the environment as a whole. I’ve said it over and over again, several years from now – Crimea’s economic growth has every chance to turn it into a global economic cooperation zone, a kind of a Russian Monaco.