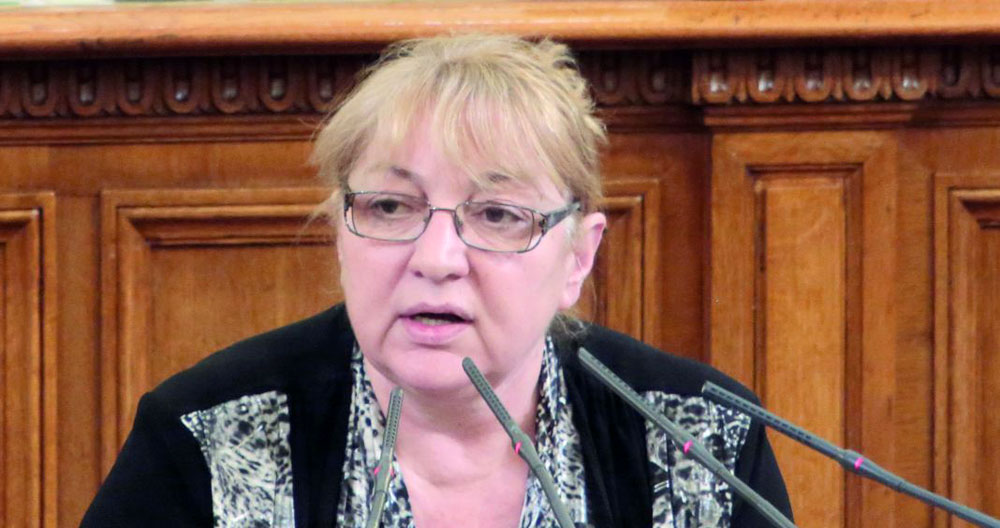 ‘The Kiev regime should be put in a straitjacket!’

The situation of the national and ethnic minorities in Ukraine is very alarming. This is the direct consequence of the putsch in Kiev in February 2014 which was supported by Western governments – including Germany.

Extremists came to power in Kiev, and some of them don’t even hide their sympathy for Nazism. On the contrary: Political parties and groups such as “Right Sector”, “Svoboda” and others act under the benevolent eyes of Brussels.

The Bulgarian minority in Ukraine is almost 200 000 people. Since 2014 they have been exposed to social exclusion, discrimination and even terrorism. That was shown by the latest incident with the Bulgarian community in Belgorod-Dnestrovskyi, a city with 60 000 inhabitants, 46 kilometers from the city of Odessa.

On the night before the Bulgarian national holiday, March 3, the monument fort of Bulgarian soldiers in Bolgorod were desecrated with paint and insulting slogans such as “Suitcase-Sofia-Train”. On March 3 Bulgarians celebrate their liberation from Turkish rule.

On May 18 Basil Kashti, member of the city council of Belgorod-Dnestrovskyi and vice leader of the Association of Bulgarians in Ukraine, was attacked and doused with “Zielonka” – a disinfectant with a green color. Ukrainian “nationalists” wanted to punish him because he voted against allocating land for a planned building of an Ukrainian church.

On May 31 activists of the Bulgarian community in Bessarabia organized a protest in front of the city council of Belgorod- Dnestrovskyi. They appeared there with Bulgarian flags and signs calling upon Ukrainian president Petro Poroshenko to “call off” his “radicals”. On other placards were written similar slogans, including “Poroshenko, don’t touch the Bulgarians!”, the protesters urged the Kiev government to stop their repression against minorities in Ukraine.

On May 24, the great day of Bulgarian education and culture, Anton Kisse was welcomed by Bulgarian president Rumen Radev. The Bulgarian head of state said, that Bulgaria would do everything to protect the rights of Bulgarians in Ukraine: “We observe the situation in Ukraine and especially in the Bolgardskiya region. We listen to the problems of the Bulgarians in Bessarabia because our relationship with them is a priority for us and they are under our protection.” But he added that Bulgaria would support the European perspective of Ukraine.

I am not sure if that is the right solution. In Kiev politicians see exactly that as a “carte blanche” for their policy of discrimination against minorities.

Ukraine is a multinational state, the largest multinational state on European territory. This unnatural big entity is the result of unfair agreements after the wars on our continent. Ukraine includes ethnicities and nationalities who have nothing to do with the Ukrainian people. We all know that the Transcarpathian region is historically Hungarian and has nothing to do with Ukraine. In Volhinya and Galicia Polish people have been living there for centuries.

The Bulgarians in today’s Ukraine were those who sought refuge from Turkish massacres after the three Russian-Turkish wars in the 19th century. They were fleeing to Russia – not to the artificial entity of Ukraine.

These are historical facts. They can’t be erased by oppressing the Bulgarian, Hungarian or Polish minorities. Western governments could amend the wrong by reminding the Ukrainian Neonazis of their country’s history, not to mention the repressions against Russians in Ukraine. And etched in our collective memory, is May 2, 2014, when the “Sturmtruppen” of the Kiev government killed at least 48 civilians in the labor union house in Odessa by burning them alive.

Instead of putting Poroshenko’s regime in a straitjacket, Europe keeps silent and turns a blind eye to such terrible events.

On May 23 the Ukrainian parliament implemented a new law, which says that 75 percent of all national TV programs have to be broadcasted in the Ukrainian language. For regional media, it is 50 percent. These measures are directed especially against the Russian speaking population of Ukraine, who number no less than eight million people. This law is directed against the cultural rights of all the other national minorities including Bulgarians, Hungarians, Romanians, Poles and also Germans.

Instead of immediately stopping this repressive politics, EU authorities are introducing a liberal visa regime with Ukraine. This can be only interpreted as an “ encouragement” by Kiev.