Lampedusa, the door to the EU. Photo supplied
Rome

Images of an illegal migrant landing that took place on 28 July on the most popular beach among shocked tourists and holiday makers, was broadcast by Italian CorriereTV. But the government is instead concerned about the politician who had tried to stop these illegal landings. 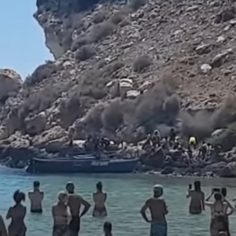 Migrant landings in Lampedusa have continued non-stop, even as the Italian island is struggling with the continuous arrivals of small boats leaving from Tunisia. Some 26 illegals arrived undisturbed directly on the beach of the Isola dei Conigli, the most popular beach, debarking while the incredulous bathers watched the spectacle.

A few moments later a Coast Guard patrol boat reached the boat, just as a police van arrived. Within 20 minutes two other boats arrived at different points on the island, with 66 migrants on board in total.

In the early morning seven other ships had disembarked, three of which arrived directly on the shore. Because the reception center in the Imbriacola district is already overcrowded, the illegals were transferred to other centres.

To make matters wore, there are migrants who have tested positive for Covid-19 at the Lampedusa centre. On Friday, at least two foreigners were transferred by means of a helicopter of the Guardia di Finanza. Their conditions, according to local sources close to Giornale.it, were serious, and for this reason, the transfer to an appropriate hospital off the island was ordered.

The two migrants were isolated inside a protective tubular structure on the helicopter. Meanwhile, other migrants, who had arrived at the Lampedusa reception center, have tested positive elsewhere. In Treviso 129 illegals have tested positive for the virus while Turin reported four cases. They had all landed in Lampedusa a few days earlier.

There are currently 700 illegals on the greater island of the Pelagias. The danger that the Coronavirus can be imported by foreigners is increasing with consequent serious risks both for citizens and law enforcement.

The Secretary General of the Autonomous Union of Police Stefano Paolini told the daily of the danger faced by the police: “The situation has become unmanageable and there are no answers from the Ministry of the Interior to manage the phenomenon. We still have no indication of the rules of engagement that can be applied when migrants run away from the reception center. How can we block them?” Meanwhile, in every part of Italy, migrants continue to escape from reception facilities.

League leader Matteo Salvini said on Friday that he was the victim of an injustice after the Senate on Thursday voted to authorize putting him on trial for “kidnapping”.

As crossings of the Mediterranean by migrants become more and more frequent, senators are trying to shift the focus, RFI reported. Salvini is thus accused by the court in Palermo (Sicily) of “kidnapping” in the Open Arms case. This ship had been chartered by the Spanish NGO Proactiva Opens Arms, in August 2019, with 80 migrants on board.

The case is one of several stemming from Salvini’s closed ports policy against NGO-run migrant taxis. The Open Arms spent almost three weeks at sea last year after Salvini refused to allow it to dock.

Ironically, Premier Conte had been in agreement with Salvini’s handling of the case. The leader of the League has seen his immunity lifted by Italian senators which has paved the way for a trial.

This lifting of immunity is a victory for the NGO Open Arms, which said it did not target only the former Minister of the Interior, “but a vision of the world and of politics opposed to the reception of migrants”. The fact remains that in this case, Matteo Salvini faces 15 years in prison.

Before the Chamber of deputies, Salvini reaffirmed his commitment to the law. “I am proud to have defended Italy and I will do it again,” he said. He denounced the political pressures exerted on him: “If someone thinks of scaring me with a political trial, he is mistaken. I am going forward with my head held high, I will come back to the government and I will do the same things.”

This waiver of immunity is the second for the Federal Secretary of the League. Last February, it was lifted in a procedure where he was accused of having blocked 116 migrants for several days on board the Gregoretti, a coastguard vessel, in July 2019.

The League said it had been a “collective decision” on behalf of the government.

A European Commission spokesperson said on Thursday that the EU executive was “aware” of the intensification of the arrivals from North Africa. The spokesperson said the EC was “following closely” the situation, especially Lampedusa where “the difficulties are significant”.

“Clearly it is the job of the member State to deal with these difficulties initially,” the spokesperson said and added that the EC had already given support to Italy.