Ginsburg speaking at a naturalization ceremony at the National Archives in 2018. Wikipedia

A day after US Supreme Court Justice Ruth Bader Ginsburg (RBG) left her court seat vacant, President Donald Trump’s supporters in North Carolina chanted: “Fill that seat” during a rally. RBG’s death has fired up a political battle for the future of the Supreme Court, the rule of law and the notion of an independent judiciary.

Democrats are furious and have been trying to prevent a nomination before the election because it will cement a conservative majority for decades to come.

Trump and Senate Majority Leader Mitch McConnell both indicated that the seat should be filled before Election Day on November 3. 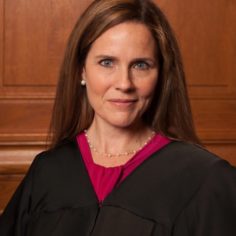 Judge Amy Coney Barrett, one of the favourites to replace RBG. In September 2017, The New York Times reported that Barrett was a member of a small, tightly knit Charismatic Christian group called People of Praise. Wikipedia

Trump meanwhile confirmed that his nominee would be a woman, and he may make an announcement as soon as next week. Amy Coney Barrett of Indiana, is one of the favourites. She was a finalist for Trump’s second high court nomination, which ultimately went to Brett Kavanaugh.

“There have been 29 times a vacancy opened during an election year or prior to an inauguration,” Trump underscored. “Every single time, the sitting president made a nomination.”

Republicans already have a 53-47 majority in the Senate, suggesting that four Republicans would have to break ranks to prevent Trump’s nominee from being appointed. In the case of three breaking ranks, the 50-50 tie would then be decided by Vice President Mike Pence.

Republican Maine Senator Susan Collins was the first to break ranks on Saturday. Collins is one of the most vulnerable Republican senators, trailing her Democratic opponent by five points.

Ginsburg became famous after she criticized presumptive Republican presidential nominee Trump in three separate interviews in July 2016, telling The New York Times and the Associated Press that she would emigrate to New Zealand if Trump became president. She never kept her promise however.