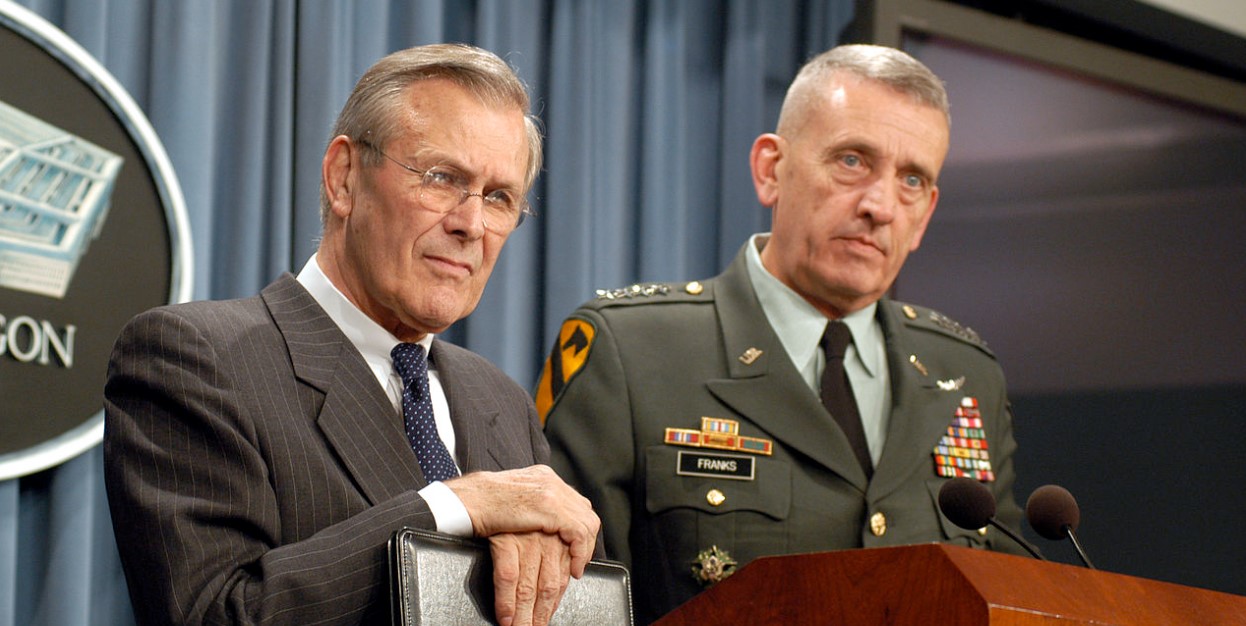 Secretary of Defense Donald H. Rumsfeld (left) at a Pentagon press conference on March 5, 2003 on conflict in Iraq. Wikipedia
Washington

The Butcher of Baghdad: Donald Rumsfeld, dead at 88

Donald Henry Rumsfeld held many varied US governmental positions over many years of service to his country, but will always be remembered for being an architect of the war in Iraq, which killed at least 1 million Iraqis within the first five years of war.

Rumsfeld had never been to Iraq and refused to pay attention to Hans Blix, who was entering his hotel in Baghdad when he was informed by journalists that President George W. Bush had given the order to start bombing in hours. Blix, a Swedish diplomat was the United Nations’ chief weapons inspector from 2000 to 2003. He stood stunned, almost unable to comprehend what the journalists were saying. Days later, he stood at the UN giving a detailed report on his findings of inspections in Iraq. He said, “There were about 700 inspections, and in no case did we find weapons of mass destruction.” But by then the “shock and awe” invasion was in full swing, and hundreds of unarmed civilians lay dead and maimed.

A Pentagon Inspector General report found that Rumsfeld’s office invented facts and figures about Iraq, which were not based on US Intelligence sources.

In 1996, a paper was prepared for Prime Minister Benjamin Netanyahu, now voted out and disgraced in a corruption trial in Israel. At the time he was the Prime Minister of Israel. The co-author of the paper was Richard Perle, who in 1970 and again in 1983 was investigated by the FBI for spying related charges connected to Israel. Perle personally delivered the report to Netanyahu, even though Perle was a US government official at the Defense Policy Board. The paper called for the permanent annexation of the entire West Bank and Gaza Strip and the elimination of the Saddam Hussein regime in Baghdad, as a first step towards overthrowing or destabilizing the governments of Syria, Lebanon, Saudi Arabia, and Iran. Perle’s paper was co-authored by Douglas Feith, who worked directly under Donald Rumsfeld, and would be cited by a Pentagon report on the Iraq war as having invented and fabricated facts to justify the need for the Iraq war.

The paper was presented to President Bill Clinton in 1998, but he rejected the plan. The big break came on September 11, 2001. Now Perle and Rumsfeld had the ammunition to drive home the “clean break” paper that Clinton had dismissed. By then Perle was Chairman of the Defense Policy Board and tasked with designing the Iraq war, along with Secretary of Defense Donald Rumsfeld.

From the moment of the 9/11 attack, Rumsfeld started insisting on attacking Iraq. It is hard to imagine a Secretary of Defense who would push for a small invasion force of about 40 000 when the military leaders knew it would need about 400 000. Rumsfeld was so arrogant in his attitude toward the Iraqi people, he imagined there would be no resistance to an invasion. Iraqi citizens may have been unhappy with their leadership, but they would still have loved and defended their country, which transcends any dictator.

Critics of the war have alleged that pro-Israeli neo-conservatives, such as Richard Perle, Douglas Feith, Paul Wolfowitz, David Wurmser, John Bolton, and Donald Rumsfeld pushed for the invasion of Iraq because the collapse of Saddam Hussein served Israel’s interests.

How did Rumsfeld get his job with Bush?

Donald Rumsfeld was recommended for the job of Secretary of Defense in 2011 by Vice President Dick Cheney. This was a pay-back for Rumsfeld for recruiting Cheney in 1974 as Chief of Staff under President Gerald Ford. VP Cheney ended up making a fortune during and after the Iraq invasion with lucrative oil industry profits and connections. The US often cites foreign nations as being corrupt but refuses to recognize that the White House and Capitol Hill are breeding grounds for corruption.

9/11 was carried out by a team of Saudi Arabian nationals working under Al Qaeda, which was headquartered in Afghanistan. Instead of attacking and invading Saudi Arabia, to take out promoters of Radical Islam, which is the basis of Al Qaeda, the Muslim Brotherhood, and ISIS, Rumsfeld and others argued that Iraq should be attacked, even though there was no Al Qaeda presence, due to the authoritarian government under Hussein, who would not have tolerated an Al Qaeda presence.

The reasons to attack Iraq were not based on critical thinking or realities on the ground. The reasons to justify an attack had to be invented and fabricated, right down to the vial of baby powder General Colin Powell sold to the UN.

The war is over. Iraq is broken and has never recovered. The infrastructure was never rebuilt. The hospitals cannot cope with Covid-19, and before the pandemic ever hit, the hospitals would periodically run out of staple items such as insulin for diabetics. The water system was never repaired after the war, even though it was US bombs that destroyed the life-giving system.

In January 2020, the Iraqi parliament voted and requested that the US military occupation forces leave the country. So far, the US has refused the request from a democratic nation. The troops are finally leaving Afghanistan, but remain occupying Iraq, where the banners of protesters read, “Yankee Go Home”.