The frontline in this case relied on heavily outnumbered 2nd rate Lugansk draftees plucked from the LPR.

On February 27, the fourth day of the war, the Russians sent at least two light detachments into the city of Kharkov, probably to gauge resistance. At least one of the groups got shot up, and retreated with the loss of its vehicles. After this, the Russians never again attempted to enter Kharkov either with screening forces or in force. They were content to sit on the city’s northern and eastern approaches and transferred units away from this sector. This is to say the Russians had never regarded Kharkov as a priority, not the least because they understood taking it would require and tie up enormous resources.

Sitting on the outskirts of Ukraine’s second-largest city and threatening it, however, was useful as it tied down Ukrainian forces. Including new forces being generated in the city itself. Especially since, due to the proximity of Russia, this was relatively easy to do, and did not require an overstretched or herculean Russian effort.

Thus as the Russians at the end of March retreated from the outskirts of Kiev, Chernigov, and Sumy, no such Russian retreat occurred at Kharkov.

Video of Ukrainian forces during the offensive in Kharkiv Oblast. For those saying tanks are obsolete, Ukraine is using them in their offensives.https://t.co/SWHS9VaCjg pic.twitter.com/aA81A0RvHL

This largely static situation persisted until early May when offensive action returned — this time conducted by the Ukrainians. 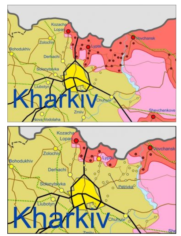 On May 4 Ukrainians attacked and in the next few days captured a number of settlements, including Stari Saltiv with its crossing over the Northern Donets river. This partially cut off the Russia-led forces at Kharkov from the main body of the Russian side to the east of the river.

After a brief lull of a few days, Ukrainian gains resumed. Russia gradually fell back to within just 10 kilometers of the Russian border all along the front, and in one place Ukraine actually reached the Russian state border.

During this second stage of the battle, the exposed Russians withdrew from some settlements voluntarily ahead of the Ukrainians, while many others were wrestled from them by force. According to Strelkov: “The withdrawal of the LDNR units and units of the National Guard, staffed entirely by poorly armed reservists, to new positions, significantly remote from Kharkov compared to the previous ones, has ended.

In some places, the withdrawal took place without the direct influence of the enemy, elsewhere — as a result of his direct pressure on the extremely under-armed, very small and completely untrained and/or inexperienced units of the ‘allies’.”

Ukraine was actually advancing faster at Kharkov (albeit on a narrower front) than Russia was able to during the same time in Donbass. It is true that both sides understand that Kharkov is the sideshow to the main battle, so this was nonetheless no major Ukrainian victory.

However at the same time apparently the Russia forces seemingly failed to offer the same kind of dogged resistance offered by the Ukrainians entrenched in Donbass who are fighting for every meter and won’t abandon a settlement until it has been reduced to rubble many times over.

Also we have little evidence that Russia was able to leverage the fact Ukrainians were attacking and on the move, to inflict grievous losses with its artillery or air force. (This is perhaps worrying from the Russian POV. The common wisdom has been that Russian firepower would exact a heavy price on the Ukrainians whenever they left prepared positions and had to mass for a counter-offensive.)

With the Russians pushed back from Kharkov outskirts the Ukrainians might be able to divert more resources away from their second city. Most likely to spoil attacks into the flank of the Russians attempting to break out from Izyum bridgehead.

Also, should the Russians ever wish to blockade Kharkov they will have to bleed for the same settlements yet again.

Theoretically the new gains allow the Ukrainians to shell the Russian city of Belgorod, but this would require deploying heavy artillery to the very front line and is thus unlikely. 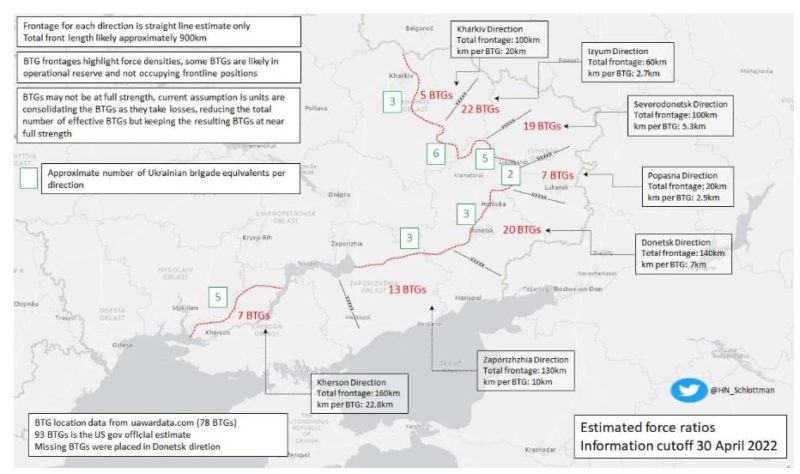 A Ukrainian brigade is the equivalent of perhaps 3 Russian BTGs.

The reason the Ukrainians were able to conduct a successful offensive here is very simple. It is because around Kharkov the Russians are outnumbered.

The Russians stripped their flanks to the benefit of their Donbass effort, leaving them outnumbered against the constantly reinforcing Ukrainians.

The reason they had to do this is because of the severe shortage of manpower in general. They already lack the correlation of forces in Donbass for swift and dramatic success. Without having left their northern flank at Kharkov, and the southern one at Kherson outnumbered 2 to 1, their punching power in Donbass would be even less.

Actually many of the troops on the Russian side were fighters from Lugansk, and not even Lugansk regulars, but their newly-mobilized conscripts. Moreover the Lugansk guys lacked anti-tank weapons.

In the villages of Russkaya Lozovaya and Kutuzovka, there were units of the People’s Militia of the LDNR, formed mainly from mobilized residents of the republics. They had practically no heavy weapons, so they had no chance against a tank attack, which was accompanied by heavy artillery fire.

So not only were the Russian-led forces at Kharkov outnumbered, but also their quality left much to be desired.

Pro russian #LNR & #DNR fighters stuck at the border crossing to #Russia after their retreat from northern rural #Kharkiv
no permission to cross into Russia 🤣 pic.twitter.com/yfdLr3SYyZ

As said, this is a secondary theater, and so it can not be said that Russia suffered a major defeat. However, the state of its flanks and that Ukrainians were able to pull this off puts lie to a claim that Russia has enough troops committed for the task.

When you’re having to patch up your lines with second-rate Lugansk reservists and leave them to face a twice stronger enemy then you simply can not claim to have all the men you need. It is abundant proof of exactly the opposite.

It’s almost as if fighting a major war at 50 percent manpower, including because serving conscripts are left at home, isn’t a good idea.

It’s incredible that a 145 million Russia with a 1-million military should be outnumbered on any section of the front, its troops left to face 2 to 1 odds, but that’s where we are.

PS.: This particular “border” video appears fake, but to my knowledge even the Russian side does not deny that Ukraine reached the Russian border at the village of Ternova.

A few days ago, drunk, (or high) Zelensky, cheerfully congratulates the tiktokers from Kharkov Volkssturm, who allegedly went to an unnamed section of the Russian-Ukrainian border and filmed a video with a border post there.
But did they tho? (watch till the end) pic.twitter.com/Ly4hepSSGm