Not in the mood for multicultural propaganda: Sushi ad riles Russians

In numerous white European countries, more and more people of colour are being featured in advertising, which is intended to represent an image of the current "diverse" society, i.e. the society being imposed on citizens by the far-left language police. But Russians will not put up with photos showing a male black model and a lunchbox with a rainbow print.

The Russian sushi chain Jobidojobi triggered an outcry with its multicultural advertising campaign in an Instagram post. Conservative citizens saw it as a gross insult to Russian women and campaigned against the advertising after Jobidojobi posted a picture on social media of an African man eating sushi. He is surrounded by three adoring Russian women. The obvious sexual overtones in the picture caused great displeasure and the company was flooded with angry messages.

Jobidojobi’s advertising strategists may have looked at Western media as their role model, because for some years now, it has been good form in the West, so to speak, to inundate advertising with multicultural messages. One theme is particularly dominant: an African man shown together with adoring, smiling European women. Most of the time, the pose makes it clear that the man and woman are in a sexual relationship.

The children resulting from racially mixed marriages are also the most common children featured in advertisements. With baby products in particular, children of mixed race are increasingly seen as desirable. In fact, there seems to be a kind of tacit law that one can only show mixed race couples. Do the globalists use advertising to subliminally impose their version of a completely mixed, globalized, hybridized society? 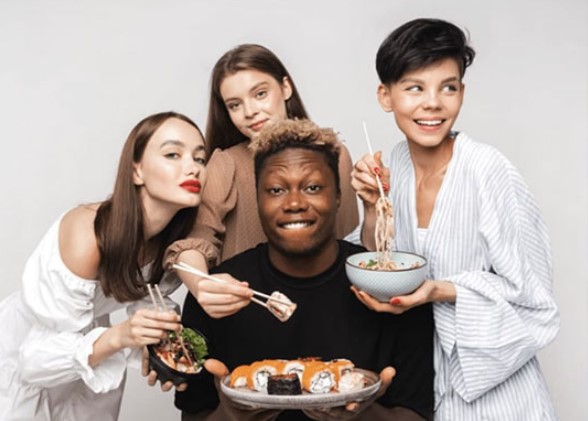 Russians are not in the mood for diversity training it seems. Jobidojobi’s ad featuring an African was promptly removed. Screenshot from Twitter

But in Russia this propaganda is not tacitly accepted. The company had to backtrack and meekly apologize: “On behalf of the entire company, we would like to apologize for offending the public with our photos. We’ve removed all of the content that caused this hype. Above all, we want to manufacture a quality product that will satisfy our customers.”

The branch manager of Jobidojobi in Krasnoyarsk even publicly apologized to the “entire Russian nation”. And the chain deleted the photograph of the African.

The founder of ‘the Male State’, Vladislav Pozdnjakov, had mobilized his 100 000 followers on Telegram to attack the sushi chain with DDoS attacks, fake orders and bad reviews. According to Pozdnyakov, those photos are propaganda material to “impose progressive values ​​on the Russian people”.

Ecological supermarket Vkusvill (which also has branches in Amsterdam) was also targeted in July because of a commercial with a lesbian couple. Vkusvill apologized for “hurting the Russian people” and removed the material. Vkusvill is now being boycotted on social media by pro-Western “progressive” Russians.