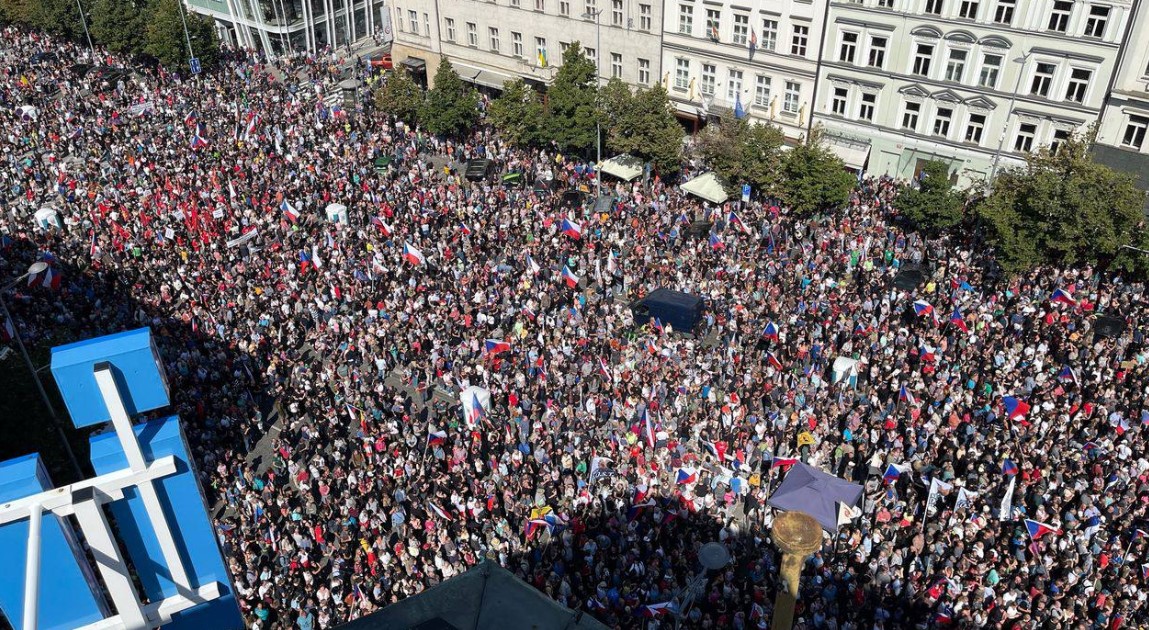 Mass demo against sanctions in the Czech capital Prague. Screenshot from Twitter
Prague

In the Czech capital of Prague up to 100 000 people demonstrated on Saturday against the government policy, which has been leading to skyrocketing energy prices and an impending energy emergency in the Czech Republic. Immediately prior to this, there had already been a motion of no confidence in the government under Prime Minister Fiala in the Czech parliament.

In Prague, as in many European capitals, the government refused to see the protests as a political warning signal, but tried to blame Russian “trolls” for the increasingly irritable mood among the population. Another indication of the development in the country is the fact that a broad alliance of conservatives, right-wingers and communists called for the large rally on Saturday.

In the Czech Republic, the very existence of industry is threatened due to the lack of Russian gas supplies. Despite this, the government fully supports the EU’s sanctions course – and, needless to say, is now feeling the consequences.

The government is pretending to see Russian machinations behind the protests: “It is clear that Russian propaganda and disinformation campaigns repeatedly appear on our territory, and some simply succumb to them,” Prime Minister Fiala declared. Interior Minister Rakušan also saw “Putin” behind the protest: “Dividing society is one of the goals of the hybrid warfare we are dealing with. We can’t let him do that. That is why we are working on solutions that will reduce people’s fears about the future.”

According to the ideas of the organizers of the rally, every Czech household should be entitled to three megawatt hours of free electricity. In addition, one of the demands of the alliance was that its representatives should be authorized to conclude energy supply contracts.

“We’re taking our country back,” they said at the beginning of the three-hour rally. The call for this also included military neutrality and the loss of sovereignty to supranational structures. “The Czech Republic must free itself from direct political subordination to the EU, the WHO and the UN,” it said.

But that’s not all: “If the government doesn’t resign by September 25,” the organizers say, “in accordance with the Czech Republic’s constitution, we will declare the right to protest at a nationwide demonstration and announce measures to force the resignation. We are already negotiating with unions, companies, farmers, mayors, transport companies and other organizations to declare a strike,” they warned.

The same scenario is also possible in Germany. It was not for nothing that Federal Foreign Minister Baerbock warned of “popular uprisings” in the autumn.

In Leipzig left and right unite

The “Hot Autumn” proclaimed by the Left Party was reflected at least in the temperatures as the thermometer rose to 25 degrees on Monday evening in Leipzig’s historic city center. Both left-wing and right-wing parties and alliances have called for rallies at this historic site, based on the Monday demonstrations of 1989/90.

A total of 10 000 participants were expected, but in the end, Augustusplatz was flooded with people. The federal government had presented its new relief package on Sunday to absorb the economic consequences of the sanctions policy against Russia – and to prevent protests like this Monday evening.

Germans rise up en masse. Demonstrations in many German cities against Olaf Scholz’s policy and the sanctions against Russia that are leading Germany and beyond into the abyss. In the video Leipzig. It will be a very hot autumn in Europe and beyond. pic.twitter.com/anM4mAXmH1

The Federal Chair of the Left Party, Janine Wissler, recently expressed doubts on Deutschlandfunk that measures like these could alleviate the displeasure of the population. And the politician defended herself against accusations that her party also offered a platform to “right-wing ideologues” during the Monday demonstrations.

Leipzig’s Greens, for example, recently complained that the Left Party was “damaging Leipzig’s historical heritage” and thwarting “the commitment of Leipzig’s city society for democracy and cosmopolitanism and against right-wing marches in the heart of the city”. Wissler countered that social protests were needed against the “dramatic injustice” in the country. “We will not let the right take the high road. Not on Mondays and not on any other day either.”

Thousands of Germans in Magdeburg oppose Olaf Scholz’s policy by shouting: “Nord Stream! Nord Stream!” EU sanctions were supposed to weaken Russia’s economy, instead they are destroying Europe’s economy. This is reality. pic.twitter.com/URom5pkNCJ

“I almost fell off my chair!” said Florian Philippot, leader of the political party Les Patriotes. Philippot commented on the fact that news outlet LCI fraudulently reported that the demonstration on Saturday in Paris against Macron’s harsh energy policy “did not take place”.  LCI further claimed that they were only “fake images” of the protests and “hijacking by Russian television”.

Philippot accused the outlet of lying. “It did take place. There were people there. LCI was informed and invited.”

Macron’s energy repression is the fourth threat that comes on top of the jihadist threat, the police threat (which hovers over the Yellow Vests), and the health threat, said his critics.

“The ecologists who applaud this deindustrialization do not understand that the destructive neoliberalism of the Great Reset is advancing behind a green mask. Even if it is true that overfishing is destroying the seabed and fish stocks, the climate crisis is a sham. The programmed destruction of production in Europe by Schwab and his friends leads inexorably to mass unemployment, impoverishment of the middle class and the extinction of our countries,” noted a critic of the French administration.

“The parasitic system is ready to destroy the societies that host it in order to survive.”