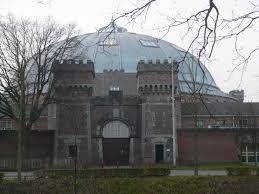 A government agency in the Netherlands has opened empty prisons to accommodate the influx of migrants into the country.

But all over Europe politicians are facing angry voters because of large sums of money that are being diverted to refurbish barracks, airport hangars, old town halls and even a four-star hotel to house migrants.

And many migrants continue to live on the EU taxpayer’s dime by serving other migrants, directing newcomers where to sign up for government assistance and free services.

Dozens of correctional facilities have been closed in the Netherlands. So when the number of migrants started to rise—more than 50,000 entered the Netherlands at the beginning of last year alone—the Central Agency for the Reception of Asylum Seekers (COA) quickly came up with the solution to reopen prisons as migrant shelters.

Many nationalities are housed together in such free accommodation.

The migrants, who will live in the centres for at least six months while waiting to be granted asylum status in the Netherlands, are free to come and go as they please. They are not allowed to work, however. Instead they “practise speaking Dutch” and learn to ride bicycles.

Both skills are essential to life in the Netherlands, but few master both.

One Syrian migrant at De Koepel, as the prison is called, told AP that living in the prison gave him “hope” because “there were no criminals to jail” in the Netherlands.

The Spree Hotel outside Dresden, Germany was once a popular vacation resort. Now it plays host to recently arrived foreigners.

Pakistani men arriving in Germany without their families are initially assigned to a dorm-style room. Some decided to stay on until twin rooms become available.

German aid organization Arbeiter-Samariter-Bund (ABS) converted a former town hall in Berlin’s trendy Wilmersdorf district into a “refugee centre”. But Germans living in the same area have to pay high rentals to be in the centre of town.

In Britain a jobless Somali and his brood made the headlines when they had to move to a million-pound semi-detached home owned by the local council after the Government capped benefits.

The British daily newspaper The Sun traced the family to their recently renovated four-bed home, freshly painted. Their new London abode, only slightly less expensive than the former, is close to up-market cafés, shops and bars with Camden council footing the bill.

When the struggling Greek government closed down the makeshift camp of Idomeni in May, authorities transferred around 4,000 refugees to state facilities, old warehouses and factories filled with tents.

But aid workers complained and called the new sites “derelict”.