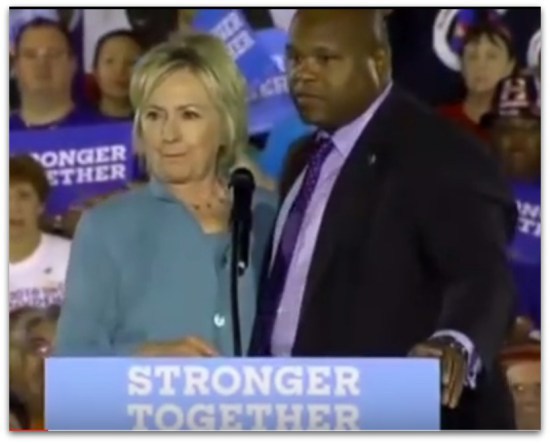 After an absence Hillary’s aid is back by her side

After disappearing for weeks, Hillary Clinton’s mystery African American aide is back by her side.

While Nigerians have congratulated their compatriot dr. Oladotun Okunola for playing an important role in Hillary’s wellbeing, some reports have denied that he is actually a Nigerian physician.

Matt Drudge pointed out today the man hasn’t been seen with Clinton since her dramatic collapse on September 11.

Mysterious medical/security agent has NOT been seen by Hillary's side [or anywhere] ONCE since the 911 seizure. What did they do with him?! pic.twitter.com/uLGY8ZX9HP

The African American could be seen quickly appearing as Hillary was making her entrance into a Miami rally with Al Gore on Tuesday, but did not to follow her all the way.

While some have claimed he is a Secret Service agent, his stances — not being in secure position while the candidate was making her entrance — would lend credence to the idea that he serves a purpose other than protecting Clinton.

Prior to Clinton’s spectacular collapse, he was seen regularly at her side.

On September 6th, he could be seen exiting the front seat of her motorcade van before venturing to the side — away from the awaiting cameras — then emerging with Clinton.

Questions began surfacing about his role in early August after the “agent” was seen rushing to Hillary’s side at a Las Vegas rally when a small group of loud protesters began rallying near the stage.

He could be seen putting his arm around her, urging her to continue talking, and waving off Secret Service agents, despite the potential security threat not being contained.

“You’re okay,” he could be heard saying on the hot mic. “Keep talking,” he said as she stood in stunned silence. “We’ll handle it. We’re not going anywhere,” he said. “Keep talking.”