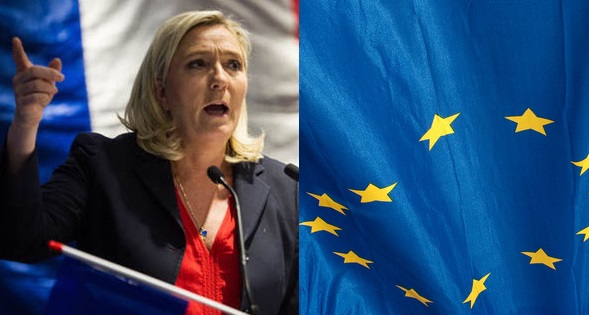 Marine calls for a Frexit

The leader France's right-wing Front National party, Marine Le Pen, told CNBC on Monday that France would call a referendum for an exit on the European Union if her party wins in 2017. She sent shivers down the spines of the Brussels elite struggling to comprehend the surging tide of discontent.

Le Pen confirmed that if elected she would call a referendum to give French citizens the choice of withdrawing France from the monetary union or leaving the 28-country bloc to stem the pernicious effect of the euro on France’s monetary system.

According to the FN leader the EU currency is a weapon held to France’s chest, forcing it to move in certain ways. She added that the most important issue was for France to regain control of its currency.

Le Pen said Merkel does not fit the mood of the times. She said that her days were numbered given the pace of political change currently sweeping Europe. The election of Donald Trump as president of the United States showed the “massive return” of the will of the people, the leader of FN explained.

Merkel announced on Sunday she would run for a fourth term in 2017, making her the longest serving ex-Communist after German re-unification.

The feisty Front National leader highlighted the opportunity arising from a series of recent political developments — from the UK’s EU referendum, to the rise of the far-right in Austria and Trump’s victory — because power was slipping from the hands of “the elites”.

“I think that the elites have lived too long among themselves. We are in a world where globalization, which is an ideology, has forgotten, and put aside the people, the people’s interests, aspirations, and dreams,” Le Pen pointed out.

“They have acted like carnivores, who used the world to enrich only themselves, and whether it’s the election of Donald Trump, or Brexit, the elites have realized that the people have stopped listening to them, that the people want to determine their futures and in a perfectly democratic framework, regain control of their destiny,” she continued.

“And that panics them, because they are losing the power that they had given themselves.”

The elite in Brussels are indeed expressing panic about the prospect. Eurocrat Martin Selmayr, the right-hand man of Brussels chief Jean-Claude Juncker, tweeted earlier this year that Marine’s election would be a “horror scenario”.

“I think that the United States will regain its image which had become very damaged, especially by the administration for which Hillary Clinton worked. The United States cannot have the image of warmongers, with all the potential consequences it could have for our respective countries,” Le Pen said. “So, that the United States has once again regained an image as an organization of peace is beneficial for us all,” she concluded.

Le Pen said Trump’s platform and that of her own party share similar features such as a refusal to continue mass immigration policies and unrestricted free trade “ravaging” France and the European Union (EU), while focusing on the elimination of the Islamic State (ISIS).

“So yes, [as a response to] these conditions, if the French people too wish to regain their independence, wish to regain control of their country, and wish to reinforce the elements of security, the borders, the rule of law, economic patriotism, then I will be elected president,” she said.

Meanwhile France confirmed on Monday that it had foiled a planned terrorist attack. Seven people were detained on Sunday, including members of Islamic State in Syria.

A second source told Reuters that some one possible ISIS operative had been identified after a tip-off from the Portuguese government. Four handguns and a submachine gun were recovered during house searches, the source said.

Interior Minister Bernard Cazeneuve said the seven, of French, Moroccan and Afghan origin aged 29 to 37, were netted after an eight-month operation by the DGSI internal intelligence agency. He said the scale of the terrorist threat was “enormous and it is not possible to ensure zero risk” despite France’s best efforts.

French security officials fear jihadists will increase attacks in the West. Two were arrested in Marseille and four in Strasbourg, but Cazeneuve did not say where the seventh man was arrested. More than 230 people have been killed in terror attacks on French soil since January, 2015.

Several polls have suggested that conservative candidates would face a drubbing in the first round of the race to become the next leader of the country. Le Pen has scored between four and nine per cent higher than either of the two centre-right politicians, Alain Juppé and Francois Fillon.

The shock surveys released this week show that, in the first round of voting, the anti-immigration politician would beat Fillon by 29 per cent to 20 per cent, and Juppé by a narrower margin of 30 per cent to 26 per cent.

After the results were released, Le Pen tweeted: “I am the patriotic candidate, I’m fighting in the name of the people. That is the meaning of my bid for the presidency.”

Polling conducted earlier this year indicated that the blond Eurosceptic chief will eventually lose the second part of the battle for the keys to the Elysee Palace, but a third or more of French voters are now prepared to back a candidate who openly advocates dismantling the EU project.

The current French prime minister Manuel Valls has admitted for the first time that a Le Pen victory is “possible” and added “If she does make it to the second round she will face either a candidate of the left or the right. This means that the balance of politics will change completely.”

During the last French elections in 2012, Le Pen came third behind Sarkozy and eventual winner Francois Hollande, who has since become the most unpopular president in the country’s history.