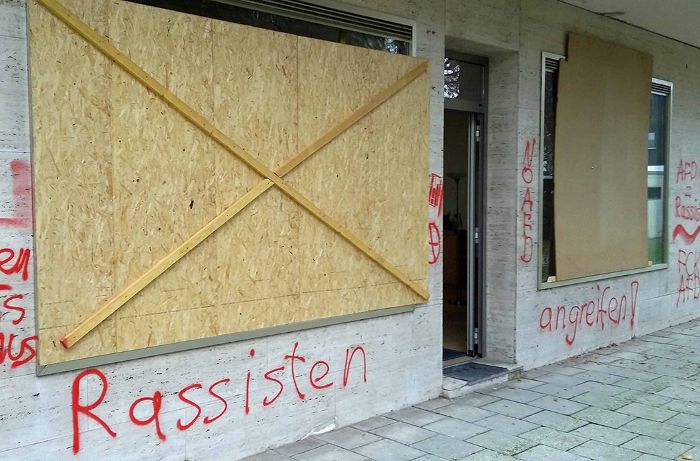 Attack on AfD office, Munich, the second one in a month

Attacks on AfD offices on the rise with media complicity?

Has the German press contributed to the rise in attacks on the anti-immigration Alternative fuer Deutschland party, the AfD by covering the party in a sneering, negative way?

Ulrich Weymeyr, an AfD party member, told Columbia Journalism Review that he believes the media is decidedly against the AfD, and is collaborating with the political establishment — Merkel’s government — to suppress his party.

In Bavaria in this month alone the AfD offices in Munich suffered the second attack on the office in two weeks and the fourth in six months. The attacks are never reported by the mainstream media.

Martin Shmid, director of the AfD’s state headquarters in Bavaria, said: “The mainstream media does almost no reporting about such incidents if we are the victims. It is almost never reported on a national level.”

A large contingent of AfD voters are in fact former Merkel supporters, says Kai Arzheimer, a political science professor at the University of Mainz and an expert on the AfD. German media also tends to reduce AfD voters to oversimplified stereotypes, describing them as “old”, “racist”, “poor”, and “uneducated”, said Arzheimer.

Founded in 2013 by Eurosceptic economists, the party injected realism into the political debate when the refugee crisis hit Germany in 2015, with Merkel promising shelter to anyone fleeing war in Syria and elsewhere.

While her stance was heralded by the leftist international media, it earned resentment from many conservative voters.

Frauke Petry’s comment in an interview with the newspaper Mannheimer Morgen in February that police should “use their firearms if necessary” to stop refugees at Germany’s borders were met with hysterical invective and ridicule, but such a measure could possibly have prevented the Berlin terrorist attack.

Not surprisingly, distrust of the press is one of many characteristics shared by supporters of the AfD. In fact, a recent poll found that 44 percent of Germans believe the press lies regularly and is “controlled from the top”.