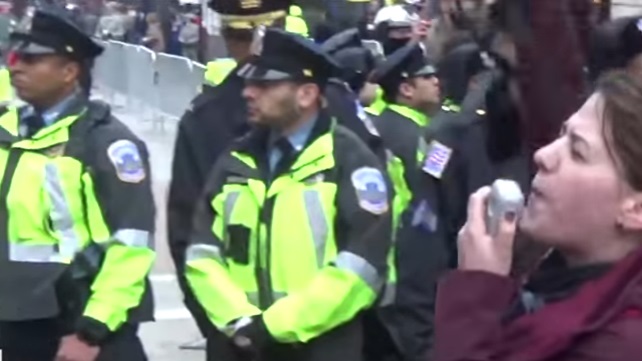 White protester chanting: 'No racist police, no justice, no peace!'

Hate crimes against whites are ignored by Soros project

In the wake of president Trump’s election, a massive 2 000 attacks and hate crimes against white students were simply ignored.

Liberals groups are ganging up to “document hate crimes”, but only crimes that impact designated liberal “victims” as none of the 21 partner organisations are conservative.

The partner groups that are openly hostile towards conservatives, include the Southern Poverty Law Center (SPLC), Univision, and BuzzFeed.

The SPLC itself incited a hate crime against the Family Research Council in 2013. Recently it published a bogus “hate crime” study in the wake of president Trump’s election, while simply ignoring a massive 2 000 attacks against white students.

Univision’s extreme bias became evident when it aired a documentary called “Hate Rising,” representing Trump as a racist, hate-driven threat to the US Latino and immigrant population. Haim Saban, Univision’s chairman, had donated large sums to the Clinton Foundation and the Clinton campaign.

BuzzFeed expressed their pure hate in December 2016 when it attacked Christian HGTV stars for attending a church that supported traditional marriage. BuzzFeed not only promotes pro-LGBT, anti-policing, pro-Islam, and race-bating issues, but their journalism ethics are in short supply after it saw fit to publish an unverified smear report on Donald Trump.

Soros’ Open Society Foundation (OSF) announced at the beginning of this month that it would be launching a $10 million “anti-hate programme” in 2017. OSF cited the same Southern Poverty Law Center statistics as ProPublica, and even specifically mentioned “documenting hate incidents through a public, searchable database” that was to launch in late January.

The website “is intended to be the go-to resource for reporters, federal and state agencies, and civil society actors who want to learn about trends and pursue ways to address the problem,” OSF explained, but no new information is available on any of the sites.

On Friday, many white anti-Trump protesters in Washington DC accused black officers of being “racist”.

In a video, captured by NTK Network, some white protesters are shown chanting, “No racist police, no justice, no peace” while the group of racially-diverse officers seem confused about the insults.

The video highlight’s the left’s obsession with labeling and judging entire groups of people collectively, accusing them of “hate” – a textbook definition of “racism” – with zero acknowledgment of their own hypocrisy, Infowars reported.

Interviewer Larry King from RT, had to assure fans on Friday that he was not hurt after leftist protesters resorted to violence in Washington.

“Protestors in DC smashed the windows of my hired SUV & many other cars,” King posted on Twitter. “I was working in-studio & am ok, but my driver is a bit rattled.”