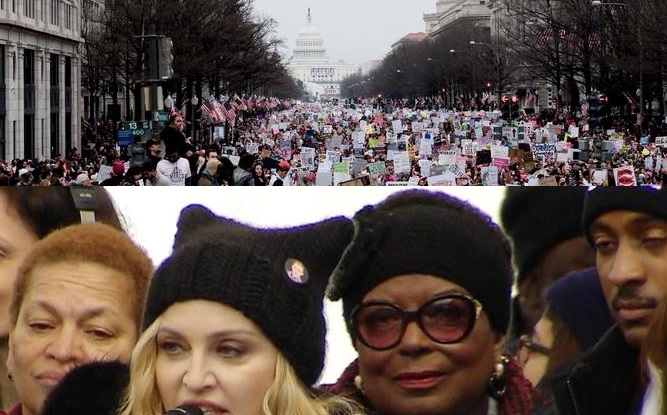 In a profanity-laden speech, the tired old singer Madonna defended her incitement to violence in suggesting she felt like "blowing up the White House".

But after her statement attacking Trump’s inauguration and her use of expletives drew intense backlash, Madonna is now desperately trying to undo the harm her domestic terrorism remarks have inflicted on her own standing.

“I am not a violent person,” she tried to claim soon after her huge gaffe in a statement on Instagram. “I spoke in metaphor and I shared two ways of looking at things – one was to be hopeful, and one was to feel anger and outrage, which I have personally felt.”

Madonna was one of many celebrities and performers who took place in the Washington march paid for by George Soros – the usual anti-Trump suspect – that included useful idiots Helen Mirren, Scarlett Johansson, and South African actress Charlize Theron. Theron has adopted two black African children, but her parenting skills leave much to be desired.

Charlize Theron’s photgraphing her own predicament

Last year the Hollywood darling was caught violently dragging her black son Max around in public.

Theron lives with her mother, who faced charges for murdering her father in South Africa under the previous white government. Madonna made an appearance at the same Women’s March.

Most of the paid female agitators riled against Trump’s “hate speech” by inciting either violence or hostility, but despite their best efforts Donald Trump’s inauguration ratings were the second-highest in 36 years, according to Nielsen.

The swearing-in of the 45th president was seen by 30.6 million viewers across 12 networks.

Barack Obama’s first inauguration back in 2009, had a record-setting 37.8 million viewers, but Trump could have been seen by more viewers than either Obama or Reagan.

Trump’s numbers are all the more remarkable considering he’s entering into office with protests organised worldwide along with vows to not watch his inauguration.