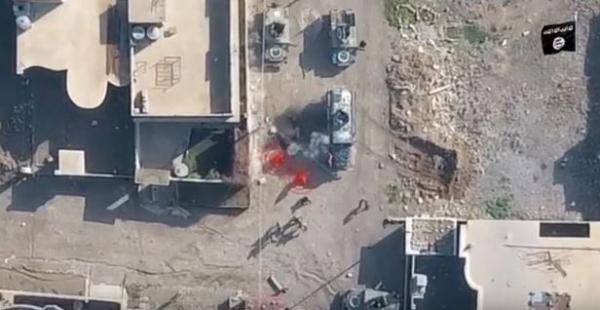 ISIS militants are boasting about their weaponized drone program which the terrorist organisation has been using to target Iraqi forces in Mosul.

A video released shows scenes taken by another drone to show a weaponized drone approaching its target, while cameras on the weaponized drone itself show the impact from dropping an IED on a group of unsuspecting people in a street.

When vehicles start to respond to the scene, a suicide bomber in a car drives in and detonates in a follow-up attack.

And while the “ISIS drone program” is unlikely to reach a level of sophistication required to take out armored vehicles, former US special forces officer, Mitch Utterback, told the British Daily Mail that the aerial IED attacks can be very effective in targeting high-ranking officers.

A reporter and cameraman were injured last week in an ISIS drone attack on eastern Mosul.

ISIS has modified commercial drones to drop 40mm rifle grenades. They are flown by the operator over Iraqi troops and the grenade is dropped by electronic command. Iraqi forces call the drones “tieyara,” Arabic shorthand for UAV, or Unmanned Aerial Vehicle, and open fire with rifles and machine guns when they are spotted. Only half the time, they are successful in bringing the drones down.

ISIS had previously relied on winged drones, but it was now harnessing small quadcopters to drop munitions.

In mid-October, the US commander of Combined Joint Forces’ Land Component Command for Operation Inherent Resolve and commander of the 101st Airborne, confirmed that ISIS drones were in use.

The general described then them as “clearly not the capacity or capability” that the coalition has, because they have little effect when dropped on tanks.

But Utterback, who discovered the devices, told the Mail: “Iraqi forces are very, very concerned about these. My concern is them being used to target specific, high-ranking officers who are leading the ground combat against Islamic State.”

The US military is already evaluating more than 20 systems to detect and destroy a drone air force. Other systems have meanwhile been rushed to the war, The Washington Times reported.

The attacks were depicted in a lengthy Islamic State propaganda video showing its terrorists in intense street battles to hold the city of Mosul. Included is aerial footage of a Chinese Skywalker X8 drone, which is available on Amazon, striking clusters of Iraqi soldiers, tanks and buildings.