The ancient order of The Knights of Malta has been decimated after a showdown with the Vatican, when Pope Francis effectively took control and announced a papal delegate would govern it through a "process of renewal".

The Holy See has destroyed the sovereignty of the Knights of Malta. Legal overreach aside, the controversy sheds light on a papacy capable of ruthless politicking, a reality that belies Pope Francis’ reputation in the media as a simple and endearing soul.

The Pope, a liberation theologist brainwashed by Marxism, has politicized the papacy in a dangerous vendetta against those within the Church who advocate the teachings of the Magisterium.

But it won’t escape Catholic traditionalists that the pope has now humiliated a Catholic knight for upholding moral orthodoxy.

The ancient order has been decimated after a showdown with the Vatican, when Pope Francis effectively took control and announced a papal delegate would govern it through a “process of renewal”.

The Order of Malta was founded amid the First Crusade to defend Christians and provide hospital care to people of all faiths in the Holy Land. Pope Paschal II recognized it as a religious order in 1113. In subsequent centuries the order also won recognition as a sovereign entity in its own right.

Following a tense standoff between the leadership of the Knights of Malta and the Vatican, its British Grand Master, Matthew Festing, was forced to resign last week following a report by a papal commission about “dysfunction in his leadership”.

The 50 Knights take vows and are traditionally drawn from noble European families. A German aristocrat, Albrecht Freiherr von Boeselager who counts many powerful liberal churchmen as his friends, is behind the move to get rid of the conservative Anglo-Saxon.

Boeselager is a major figure in Germany, close to the German bishops and to many high-level Vatican officials.

According to insider sources, Boeselager maintains the move was to “rid the Order of Freemasonry” and “pedophiles”.

It’s also notable that the Maltese affair has divided the church along familiar lines. As with other recent disputes, including the Vatican’s engagement with China and Islam, conservatives are livid about the Marxist leanings of Pope Francis.

It is curious to observe that Boeselager has been given unprecedented powers which are not in the statutes of the Order.

What remains unresolved and concealed is the mysterious donation of 120 million Swiss Francs held in a trust accessible to Boeselager’s faction from a benefactor resident in France.

The Germans in the church were against Festing, an ambassador close to the German-speaking knights told CruxNow.

When Boeselager reportedly objected to the naming of two arms traders to senior positions, arguing that the appointments didn’t sit well with Pope Francis’s condemnation of the small-arms trade, Festing ignored him and named them anyway. 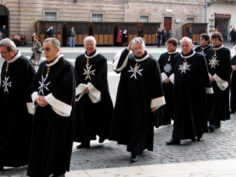 Festing’s ties to an Italian network with close connections to a wealthy and powerful order in Argentina, have long been linked to power plays in Italian politics and high finance, as well as to conservative networks inside the Vatican, according to CruxNow.

Pope Francis said in August last year that it was wrong to identify Islam with violence and that social injustice and idolatry of money were among the prime causes of terrorism.