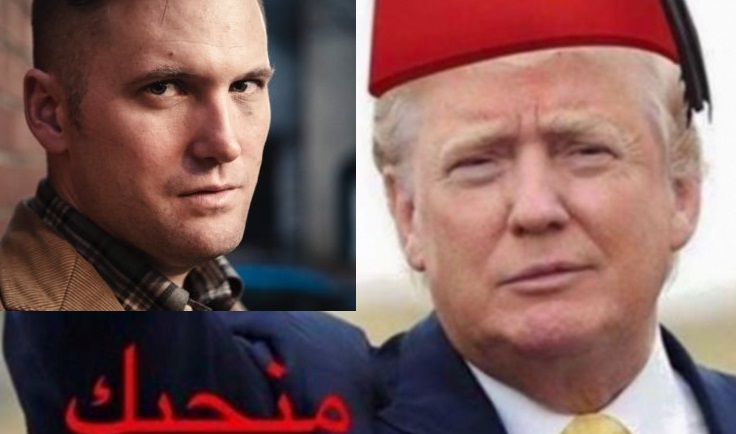 On Friday, alt-righter Richard Spencer called for an anti-war protest outside of the White House to show displeasure at president Donald Trump's attack on Syria, but had to flee from violent antifa protesters defending the war.

Spencer encouraged anyone who was anti-war to join the protest.The Alt-Right are currently the only group supporting peace.

Spencer’s decision to lead protesters to publicly speak out against the missile strike has created a split between Trump and his most ardent nationalist, anti-globalist and anti-interventionist supporters. “Does anyone want to consider what our aims are in all this?” Spencer already asked of the Iraq war in 2008.

Spencer has long been an outspoken supporter of Trump, because of his promises to end wars in the Middle East, building a wall on the southern border with Mexico and banning Muslim refugees from entering the country.

On social media the attention was focused on Trump’s son-in-law Jared Kushner, Ivanka Trump’s husband and one of the president’s closest advisors because of the power he now wields in getting rid of nationalist and American-Firster Steven Bannon.

As Slate noted: “Richard Spencer, whose support for Trump has dimmed as Trump’s stances on immigration have, according to Spencer’s harsh measure, softened, issued what is perhaps his most forceful rebuke of the president so far in a video titled The Trump Betrayal. ‘I have to be brutally honest,’ he said. ‘I am deeply disappointed in Donald Trump. I’m shocked, and I’m angry. And I am ready to condemn Donald Trump.’ He was far from alone.”

Peter Brimelow, who prior to founding the webzine VDARE, was a writer and editor at Forbes, the Financial Post, and National Review, also voiced his concern over Trump’s rash decision to bomb Syria. Brimelow said he wanted to see resources devoted to making the country more prosperous to alleviate white poverty.

After the protest Spencer tried to hail a taxi, but the antifa surrounded the vehicle as the leftists threatened him with violence and he abandoned the vehicle. Spencer and his bodyguards then escaped the angry mob on foot.

President Trump’s deputy national security adviser, KT McFarland, has been asked to step down after just three months, the BBC reported. McFarland, an ex-Fox News analyst, has been offered the “promotion” of ambassador to Singapore instead, according to Bloomberg and Reuters.

Meanwhile Islamists are calling Trump “Lion of the Sunnis”, “Caliph of the Muslims” and “Defender of the Islamic Holy Sites.” Some declaerd: “Blessed be the hands of Abu Ivanka al-Amiriki (Trump),” and expressed hope that he would do more to rid the Syrian people of their secular “dictator”, deemed to be too Western.

“We love you Trump” and “Trump is our hope” are two of many hashtags that have become extremely popular on social media, especially Twitter. Many of the writers are Gulf citizens.

In Riyad, Saudi Arabia, Arabs were replacing their profile photos on Facebook and Twitter with an image of Trump. “Trump did in a few months what Obama was unable to do in eight years,” many of them commented.