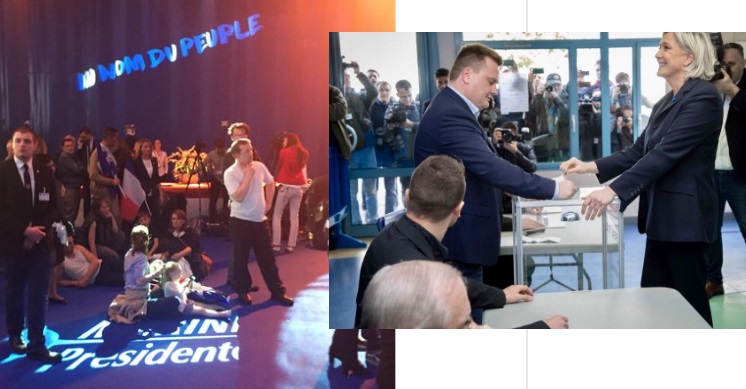 Marine and Macron go through to the second round

Marine Le Pen, leader of the Front National and Emmanuel Macron, the former banker candidate with no party, emerged as the winners of a heavily contested first round presidential vote in France.

Final voting figures from the interior ministry show that Macron came out on top with 23.75 percent, while Le Pen, followed just behind on 21.53 percent.

In the second round of the contest against Macron. Le Pen will focus again on her campaign drive: globalism versus nationalism. The globalists however can count on leftist extremists for violence. The result ignited protests in Paris where several hundred youths rioted on the Place de la Bastille in an “anti-fascist demonstration”.

Riot police clashed with left-winger shortly after projections from the France’s presidential elections showed Le Pen in the runoff vote. As police moved in on the demonstrators, they threw bottles and firecrackers, an AFP journalist reported. Three people were arrested, according to police.

In Nantes too, an “anti-fascist demonstration” took place late Sunday.

In her victory speech in Hénin Beaumont she told French people to forget the party politics that have shaped elections in the past. “The big challenge is wild globalization,” Le Pen told supporters. “I am the candidate of the people.”

Florian Philippot reminded voters of the ideological battle to come with Macron during a television interview on France2. “We’ve been able to impose this idea of patriotism at all levels,” Philippot said. “It’s really going to be about private interests against the interests of the nation.”

On LCI, Monday, April 24, Philippot said: “Among the voters of François Fillon, many, many will not accept that they are asked to vote for the one who only yesterday [Sunday] was called ‘Emmanuel Hollande’, since it is the nickname given to him by the Republicans.”

François Fillon, who had pretended to be an anti-immigration candidate too, finished third. He said he would vote for leftist Emmanuel Macron to block Marine Le Pen from winning in the second round of the election. “Abstention is not in my genes, especially when an extremist party is near power,” Fillon declared after conceding. “Extremism can only bring misfortune and division to France,” he said.

The candidate of the governing Socialist Party, Benoît Hamon, came fifth. He had run a hostile campaign against Macron, but all the invective vanished on Sunday after his crushing defeat. “There’s a clear distinction to be made between a political adversary and an enemy of the republic,” Hamon declared without irony, calling on all Socialists to vote for Macron, adding: “This is deadly serious now.”

Geert Wilders, leader of the anti-immigrant Dutch Party for Freedom, which finished second in the Dutch elections in March, sent his congratulations to Marine. “A day of celebration for all Patriots in Europe. On to the second round and the presidency,” he tweeted.

Nigel Farage, former Ukip leader, was not impressed by the pro-Europe Union Macron: “Macron speaking with EU flag behind him. Says it all,” Farage tweeted. “Macron speech was vacuous nonsense. Other than backing the status quo he says nothing.”

But leaders of the two biggest pro-EU political groups in the European Parliament, Manfred Weber and Gianni Pitella urged French voters not to back the National Front on May 7.

German Chancellor Angela Merkel’s spokesman is backing Macron and wished him “all the best for the next two weeks”. Steffen Seibert said in a tweet: “It’s good that Emmanuel Macron was successful with his course for a strong EU and social market economy,” Sigmar Gabriel, the German foreign minister, predicted that the 39-year-old Macron would be the next president of France.