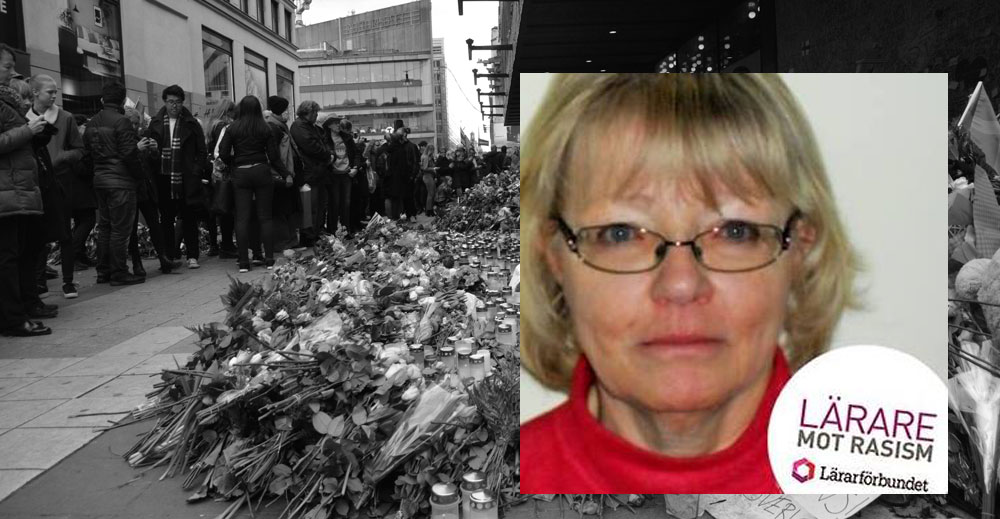 Marie Kide, 66, died from her injuries today. In this picture, she appears with a
STOCKHOLM

The 66-year old teacher from the environmental party liked “We like differences” on Facebook – a slogan used by multiculti supporters – and posted a picture that heckled those who wanted border controls just one day before the truck attack in Stockholm. She has now become the terrorist’s fifth victim.

Marie Kide, 66, became the Stockholm terrorist’s fifth victim, as she succumbed to her injuries today while still in hospital. Kide was an elected politician in Trollhättan city council for the Green Party.

Sweden’s Green Party champions open borders and Kide was herself an advocate for more immigration to Sweden and the transformation of the country to a multicultural society.

Her last post on Facebook was from the day prior to the terrorist attack in central Stockholm on April, 7th. It is a satirical drawing made by the artist Wisti, where he depicts people who call for stricter border controls as being motivated by the fear that they will no longer be able to afford luxurious kitchen equipment.

Kide’s last FB post reads: If we don’t close our border now, we could end up in a situation where we’re no longer able to buy Per Moberg’s cutting board for 400 euro.

The terror attack in the shopping street Drottninggatan in Stockholm killed four people on the spot and injured another 15. One of the victims was an eleven year old girl on her way home from school.

Shortly after the incident, the police arrested Rakhmat Akilov, 39, suspected of being the driver of the vehicle that mowed down the shoppers. Akilov is from Uzbekistan and was staying in Sweden illegally and was therefore already wanted by the police. The police however lacks resources to search for the approximately 10 000 illegal aliens the country.

There is also a lack of political will behind this. The Swedish Green Party’s legacy so far has been the introduction – after convincing the government to act – of free healthcare and free schooling for illegal aliens hiding in Sweden.