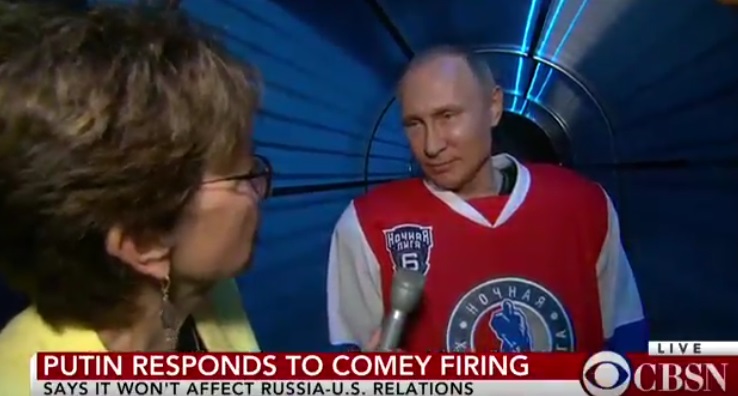 The US mainstream media hacks are hounding the Russian government about the firing of FBI director James Comey.

It is not certain why they chase Russian officials for comment on domestic US issues. Even the Russian president Vladimir Putin, was stopped at a hockey game and questioned about Comey’s dismissal by a mainstream journalist who had obviously joined a TV-and-print lynch mob.

The CBS reporter wanted to know: “How will the firing of James Comey affect US-Russia relations?” Putin looked mildly surprised at the question he subsequently called “ridiculous”.

“And what about us? Why us? You see I’m going to go play hockey. You’re invited.”

There has been considerable smoke around Russia’s alleged interference in last year’s US election, but no fire. The media however is continuing with the allegations against Russia for “meddling”.

A Politico report said Trump had been thinking of firing Comey for a week, because he had “grown enraged by the Russia investigation” and called it a “total hoax” and “taxpayer funded charade” in a tweet.

The White House hosted Russian Foreign Minister Sergei Lavrov on Wednesday morning to discuss Ukraine and the Syrian crisis. During a brief news appearance with Secretary of State Rex Tillerson, Lavrov also joked about Comey: “He was fired? You’re kidding.”

The statements by the White House and attorney general Jeff Sessions had cited two issues. The first is Comey’s unprofessional handling of the Hillary Clinton email investigation, where he had decided not to prosecute her over the mishandling of classified information and Comey’s inability to “effectively lead the Bureau”.

Comey and the rest of the world found out he was fired from TV screens carrying the news while he was addressing FBI staffers in the bureau’s Los Angeles office.

The FBI director does not operate independently from the politicians who run the country. The reality is that he or she works for the attorney general, who in turn works for the president.

It could well be that Trump had become irritated with the Russia investigation when the president wanted Comey to spend more time on the number of leaks coming out of US intelligence agencies.

Robert Parry from Consortium News noted that the Russians supposedly intervened in the US presidential campaign to “turn the leading candidates against Obama’s trade deals”. But Parry says it is simply not credible to believe that every politician had been “tricked by the Kremlin to oppose those controversial trade deals, which are also broadly unpopular with the American people who are sick and tired of trade agreements that cost them jobs”.

TASS photographer Alexandr Scherbak also responded to similarly ludicrous US media reports alleging that he is some sort of KGB propaganda agent who “tricked” America with his devious photographs of Sergey Lavrov shaking hands with Donald Trump.

He asked American mainstream hacks to preserve their “professional dignity”.

“I am urging US journalists not to lose their professional dignity and not to pin the blame on other people for their failure in organizing the photoshoot and the failure to provide access to their media. I have worked as a professional photo correspondent for many years and I am facing such absurd and ludicrous charges for the first time.”