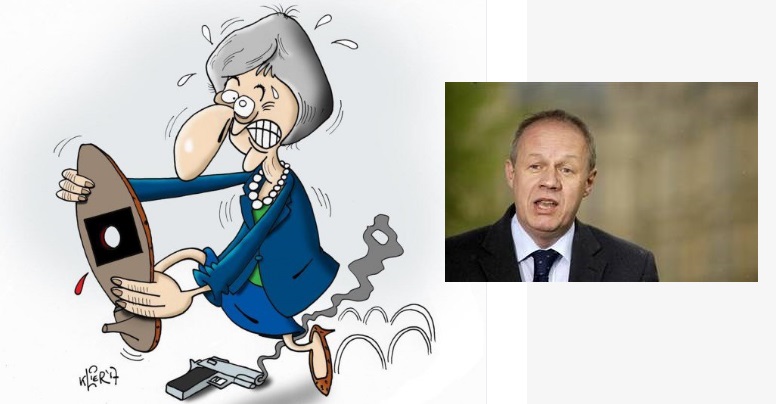 May urged to water down Brexit in return for Tory support

Theresa May and anti-Brexit Tories are using the confusion around May's tenure to water down Brexit.

The divorce from Europe could be on the brink of collapse as Tory cabinet ministers desperately lobby Theresa May to take what they are describing as a “pragmatic approach” to leaving the EU in return for their support.

In a worrying sign of things to come, Conservative MP Damian Green has been promoted to First Secretary of State and Minister for the Cabinet Office, effectively becoming Theresa May’s Deputy Prime Minister in all but name.

Given that Green is a staunch Remainer, arguing that Brexit would make the UK “less safe” and that it was “significantly in Britain’s interests to remain a member of the European Union”, the appointment is a concern to British voters who want out.

This promotion comes in the wake of Gavin Barwell becoming May’s Chief of Staff, another race-baiting, pro-immigration, anti-Brexit appointment.

Theresa May’s new shellshocked cabinet is being filled with pro-immigration anti-Brexisters, despite the Tory election debacle after the prime minister’s failure to charm voters with her disastrous manifesto.

Most newspapers all over the world made fun of May’s loss in cartoons, even in Japan. The Belgium cartoonist Klier showed May shooting herself in the foot.

Former chancellor, George Osborne has called Theresa May “a dead woman walking” and suggested the prime minister would be forced to resign soon.

Osborne said he did not expect May to survive much longer. “I think we will know very shortly. We could easily get to the middle of next week and it all collapses for her,” he said.

A senior cabinet source close to May told blogger Westmonster: “The British public themselves haven’t reached a conclusion on what they want from Brexit.” But over 80 percent voted for parties that backed quitting the single market and open borders at the General Election.

The source added: “We need to recognise the outcome. People want practical pragmatism with fewer things being ruled out – not an ideologically-driven approach.”

Nigel Farage’s communications advisor, Dan Jukes, meanwhile added more speculation by tweeting a report from the Sunday Times which says that it is the DUP themselves who could put pressure on Theresa May to bring Farage into the fold.

The job would see Farage at the Brexit negotiating table facing Guy Verhofstadt and Jean-Claude Juncker. Farage has intimate knowledge of the EU system.

The HagueThe Rotterdam mosque De Middenweg and the Amsterdam Blue Mosque are in the grip of the Muslim Brotherhood. This was the message from the terror expert and investigator Ronald Sandee this week during his testimony in the Dutch lower house of parliament on unwanted foreign influence in Islamic institutions.