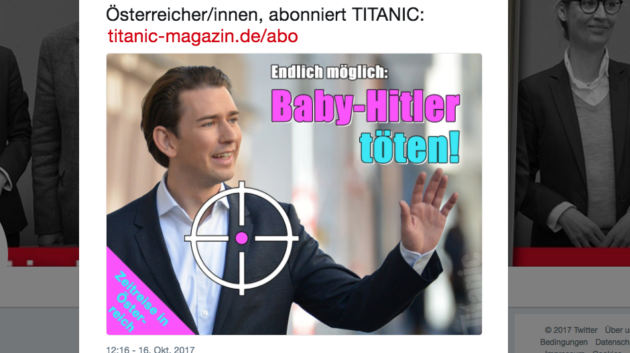 Not long after a former editor of a leftwing German satirical rag spread fake news about being attacked by a “Nazi” – an ordinary security officer – calling “Sieg Heil” at the Frankfurt Book Fair, the same magazine issued death threats to the new Austrian chancellor.

Titanic posted the picture on Twitter which shows Austrian conservative Sebastian Kurz, who won last Sunday’s election, in the crosshairs. While European media celebrated Sebastian Kurz as the Austrian Macron, the German satire magazine compared the Federal Chancellor in a posting on Twitter with baby Hitler and issued a call to murder him.

The tweet has likely broken the law in Austria, as it calls for the assassination of the 31-year-old politician, Austria’s next leader.

The official Twitter account for the Vienna police confirmed that they were looking into the matter: “We have already forwarded this to the relevant authority.” The Vienna State Office for Protection of the Constitution then initiated investigations, according to Der Standard.

Breitbart reported that one user had commented on the post saying: “Call to murder under the guise of satire – you’re disturbed! If your issue was not that expensive, I’d use it as toilet paper.”

Another tweeted: “Many ‘leftists’ really believe that – ‘satire’ is no more joke, but racial incitement.” Most readers said they found the call tasteless, not funny and extreme, Austria’s largest newspaper Kronen Zeitung, reported.

Kronen Zeitung spoke to a lawyer, Christian Solmecke, who said it was unlikely that there would be any criminal proceedings against the magazine, however.

Solmecke denied that the suggestion to assassinate the ÖVP leader was as serious as most readers thought, saying it was “satirical, not a statement meant seriously”. A second possible offense – in addition to the public demand for a criminal investigation – could be a libel suit.

The so-called “majesty affront”, which punishes an offense “by organs and representatives of foreign states”, was abolished in Germany as from 1 January 2018.

The former Titanic editor-in-chief Leo Fischer, spread fake news from the Frankfurt Book Fair, saying a “Nazi” – an ordinary security officer – screaming “Sieg Heil”, had “totally smashed up” a leftist. It turned out that it was the leftist who had attacked exhibitors at the Fair as the incident was caught on camera.

The New York Times, not a satirical magazine, meanwhile published an opinion piece titled, “In Election, Austria’s Nazi Past Raises Its Head,” together with a picture of Sebastian Kurz, suggesting Kurz was a Nazi.

The New York Times editorial board failed to mention that the left-wing Social Democrats paid an alleged Israeli criminal, Tal Silberstein to create a Facebook page filled with anti-Semitic content to smear Kurz as a Nazi during the campaign.

As FWM reported, one of the fake Facebook accounts that Silberstein created, contained overtly racist and anti-semitic content, apparently designed to look as if they were posted by “far-right” or “extremist” Freedom Party (FPÖ) Nazi sympathisers.

It's literally a direct violation of their much vaunted new rules. pic.twitter.com/m3WdkBjNC2