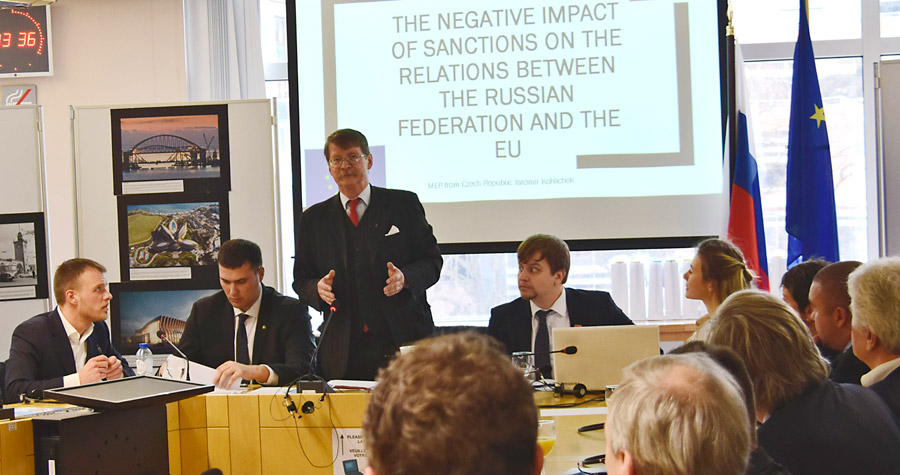 A Crimean coup in the European Parliament

A conference against EU-imposed sanctions on Russia was held inside the EU Parliament in Brussels on January 23rd. Parliamentarians from different political camps joined forces in a pursuit of a de-escalation of the tensions between Russia and the EU and to promote international cooperation. What came as a surprise to many was that a delegation from Crimea also arrived to participate in the debate.

Within the EU there is opposition against the sanctions that the Union had imposed on Russia in the spring of 2014 because of “the illegal annexation of Crimea and deliberate destabilisation of a neighbouring sovereign country”. Members of the European Parliament and other lawmakers gathered on January 23rd to express their criticism against the sanctions and discuss how cooperation could be developed.

The meeting was arranged by the Czech MEP Jaromír Kohlíček, who represents the Czech Communist party and is a member of the Group of the European United Left – Nordic Green Left. He emphasized that Russia is and has always been an important part of Europe, and that the way forward for Europe is not through the splitting of our continent by means of sanctions and bullying one of its states. What came as a surprise to many was the participation of a delegation from Crimea. It might also have been the very first time that the prime minister of Crimea, Sergey Aksionov, appeared – at least virtually – in the same halls where the majority of the European deputies frequently voted for sanctions against the Russian Federation – also because of Crimea. Aksionov was listed on the EU sanction list on March 17, 2014. The official reason: “Aksyonov was elected ‘Prime Minister of Crimea’ in the Crimean Verkhovna Rada on February 27th, 2014, in the presence of pro-Russian gunmen. His ‘election’ was decreed unconstitutional by Oleksandr Turchynov on 1 March. He actively lobbied for the ‘referendum’ of 16 March 2014.”

In a pre-recorded speech, Aksionov said: “Crimea has been part of Ukraine for almost a quarter of a century. This was a time of regress, decay and discrimination. The riches of our land have been pillaged by Ukrainian oligarchs.” The Crimean prime minister describes the choice of 2014 for many citizens of the peninsula: “Ukraine: blood and war or Russia: peace and freedom.” In his speech he invited the deputies of the conference to visit Crimea: “Come, observe and make your own conclusions.” Present in the conference hall were Aleksei Vorobev and Aleksandr Vedrussov, Russian political analysts. They told the parliamentarians that the sanctions actually helped Russia in the sense that it had to diversify its economy and markets. Today a lot of trade and cooperation is towards Asia, and although the EU is trying to degrade the Russian economy, the growth rate has recovered and showed strong figures during the year 2017.

Russia has also had to relay more on internal suppliers and point out for example all the new models of civilian aircraft being produced and taken into service. Also the Czech MEP Kohlíček touched on the subject and desribed several areas, especially within technical products, where components earlier delivered from Czechia now are manufactured domestically by the Russians themselves. Vorobev gave several examples of how Crimea has benefited from the reunification with Russia. There is for example a famous astrophysical observatory, with the Shayn telescope probably being the best known for its many scientific breakthroughs, but the Ukrainian authorities cut the funding to this site, trying to shut it down completely several times. Under the new administration, new investments are being made and the telescopes are being upgraded.

The Russian representatives also explained that because of the re-orientation to the East, Siberia has become a rapidly evolving region, and among other things the port of Vladivostok is being expanded to meet the greater demand. The expanded economic cooperation with China has led to investments to facilitate the Arctic trade route with the help of new icebreakers. Vorobev told the conference that while the ordinary route from China to Amsterdam via the Suez Canal takes 48 days, the same destination can be reached in 35 days using the Arctic route.

At the same time, he underscored that the deepened contacts with the Far East can also be beneficial to Europe, and that we all should work for an open market that everybody can benefit from.

Filip Dewinter, parliamentarian in Belgium for the patriotic Flemish party Vlaams Belang, pointed out that the Belgian economy was suffering under the sanctions. This concerns farming, especially exports of vegetables, but also arms, for which Belgium is famous. Dewinter went on to widen the scope to international relations and the geopolitical scene. He took the war in Syria as an example, and told the conference that he had had the privilege to meet with the country’s President Bashar Assad twice and discuss the situation. It is clear, he said, that Russia plays an important role in defeating terrorism and creating conditions for peace in the region.

Several speakers were of the opinion that the only one benefiting from the sanctions was the United States, which has increased its exports during the last few years, while Europe’s exports have dwindled. Some called the member states of the European Union vassals to USA, without the possibility of formulating their own independent foreign policy.

Roberto Ciambetti, the President of the Regional Council of Veneto in northern Italy, said that during the referendum in Crimea he had told a journalist: Go there! See for yourself what the people of Crimea want. Roberto Ciambetti, the President of the Regional Council of Veneto in northern Italy. Photo: FWM

The fact that a delegation from Crimea could attend a meeting inside the EU parliament has been called a virtual coup by some.

– I actually believed that the security guards would burst in and terminate the conference, but everything went smoothly and I see that there are a lot of decent and intelligent people here, Vorobev told our reporter.

As yet another way to protest the sanctions, the Crimean representatives brought Crimean tea as a gift for other participants, a product that is also banned under the EU sanctions. In addition they invited the guests of the conference to visit the Yalta International Economic Forum – one of the most important events in the Russian Federation this year. Each year the Forum is attended by high-level Russian government officials, international experts, influential international and Russian businesspeople and economists, representatives of major business organisations and other opinion leaders. Aldo Carcaci, Member of the Flemish Parliament and member of the Parti populaire. Photo: FWM

The conference united politicians from different camps and with what appears to be conflicting ideologies. Jaromír Kohlíček explained to our reporter that it was important that different opinions on other topics should not stand in the way of cooperation on important issues like the prevention of Europe being divided, a situation in which we would all be losers.

Similarly to other participants, he expressed the view that it seemed to be more important for some politicians to ostracize and isolate, than to achieve actual political results. That the main thing for them was not what you believed, but who you talked to.

Filip Dewinter told us that Vlaams Belang stood united behind the critique against sanctions, but that there were different opinions about the Crimean issue. His main impression was however that it should be considered as an internal Russian issue.

Kohlíček, being a representative for Czechia, reminded the participants of the strong cultural bonds with the East. He mentioned among other things the two Greek brothers and missionaries Cyril and Methodius, who already in the 9th century constructed the Cyrillic alphabet during their stay in the Czech lands, and spread the alphabet to the Slavic peoples. Even if Czechia isn’t using Cyrillic writing today, many of the countries of Eastern Europe do, including Russia. When we ask about what he thought the response would be to the conference, he said he was used to being criticised:

– ”What kind of Czech communist are you anyway?”, they ask. “You don’t drink beer, you have four kids and you don’t mind talking to people on the extreme right.”

He smiled and took a sip out of his 1,5 litre mug filled with green tea.