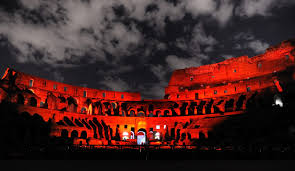 Stock photo from the Colosseum

Italian landmark to be lit up in red for persecuted Christians

The famous Colosseum in Rome, Italy, along with two churches in Mosul and Aleppo will be lit up in red later this month to draw attention to the global persecution of Christians.

“Christians are the victims of at least 75 percent of all religiously-motivated violence and oppression,” the latest report from Aid to the Church in Need (ACN) stated.

Alfredo Mantovano, president of ACN-Italy, denounced the “the martyrdom suffered by our brothers and sisters.” He said his organisation would be working with “two of the communities who have suffered the most in recent years, those of Syria and Iraq”.

ACN organised the event to highlight “the extent of this persecution is largely ignored by our media”. On Saturday, Februray 24, the Colosseum, will be lit up in red lights at the same time, as two prominent churches in both the war-torn Middle Eastern countries.

In Aleppo, the St. Elijah Maronite Cathedral will be bathed in red, as will the Church of St. Paul in Mosul. The Chaldean Catholic Patriarch Louis Raphael Sako I, said the event “means bringing back hope to Iraqi Christians who have suffered so much”.

Last year, ACN held a similar event at London’s Parliament building as well as the Basilica of the Sacred Heart in Paris and the cathedral in Manila, Philippines to show solidarity with persecuted Christians al over the world.

“In terms of the number of people involved, the gravity of the crimes committed and their impact, it is clear that the persecution of Christians is today worse than at any time in history,” John Pontifex, editor of the latest ACN biennial report on Christian persecution, pointed out.

Pontifex told the Tablet that the “pc agenda” of the elites and mainstream media is preventing action to save the Christian community.

In almost all the 13 countries where Christians suffer the most intense persecution, the situation has worsened, he said. “In almost all the countries reviewed,” the report reads, “the oppression and violence against Christians have increased since 2015 – a development especially significant given the rate of decline in the immediate run-up to the reporting period.”

ACN says the Christian presence could already have disappeared in Iraq and other parts of the Middle East. Greek Catholic Archbishop John Darwish of Lebanon noted that “the UN and other humanitarian organisations have provided no aid” to Christians.

Open Doors, another organization founded to fend for persecuted Christians, revealed in its annual “World Watch List,” that 2017 saw a violent and sustained attack on Christian faith, with at least 215 million Christians facing severe persecution, including attacks on churches.

In its 2018 report, Open Doors blamed Islamic oppression for the persecution in 8 of the top 10 countries of their Watch List.