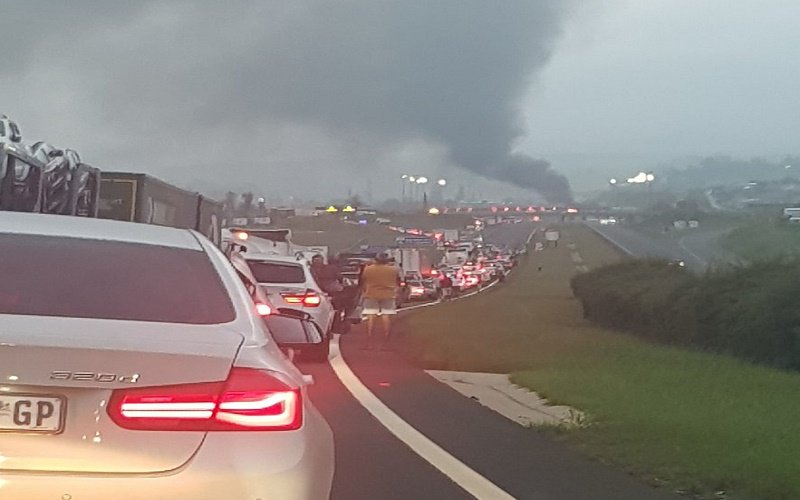 Motorists stranded along South Africa's N3 highway between Durban and Johannesburg, with burning vehicles in the distance. Photo: Twitter.

When looters and arsonists descended upon trucks along the Durban-Johannesburg highway, there was chaos.

The Easter weekend  in South Africa ended with scenes from a dystopian novel or movie: the major N3 highway to the coast being blocked due to the looting of trucks by masses of mainly black men. In order to reframe the complete breakdown in law and order, mainstream media are referring to the looters as “protestors”.

From the South African minister of police’s office came the message that there was “chaos and disorder on the national road”. According to a spokesman, Nonkululeko Phokane, “Police operations are already underway to manage the chaotic situation in Mooi River. The public order unit of the SAPS is already on site.”

Trucks and vehicles were looted and set on fire by hordes of blacks from shantytowns near the road. A cellphone video shows a truck from the supermarket group Spar being looted.

Shocked motorists and travellers shared information on social media and advised others to avoid the N3. Others expressed their frustration at the mess that South Africa had become.

Law & Order nonexistent in a barbaric waste land governed by barbaric greedy leaders getting richer & pocketing tax payers taxes as fast as they can gobble it.
Without giving anything in return.