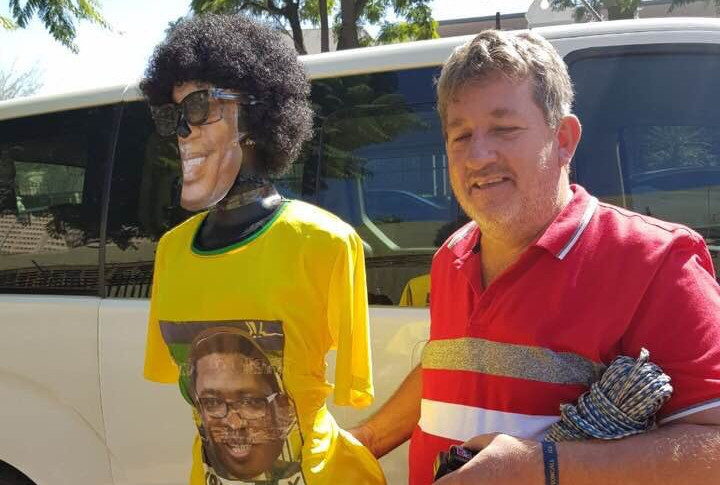 Wessel Basson with the effigy of Panyaza Lesufi. Photo supplied.

Wessel Basson, an Afrikaner activist who made an effigy of a black politician in South Africa, might be the next person to end up in jail for disrespecting someone in authority. Basson hung a life-size doll meant to represent Panyazi Lesufi, MEC for education in the Gauten Province, outside the department of education’s national headquarters in Pretoria. Now there are calls for him to be charged with crimen injuria, the same “crime” that got Mrs. Vicki Momberg  a three-year jail sentence for using the word “kaffir” about a black policeman.

Panyaza Lesufi wants to extirpate the Afrikaans language in Gauteng schools by swamping such schools with immigrant children from all over Africa, which prompted Mr. Basson’s two-man protest outside the education department.

Usually, South Africa’s mainstream media ignore protests by whites or Afrikaners, but this time there has been a flurry of reporting on Basson’s “racist” act. Lesufi himself tweeted that the protestors were “morons” whose “grandparents” were defeated.

These morons came to our offices to “hang” me! We defeated your racists grandparents, you are nothing! pic.twitter.com/hqH5fGRibJ

South Africa’s ruling party, the ANC, who likewise almost never takes cognisance of any complaints or criticisms by the country’s white citizens, reacted angrily to the effigy in a statement. The provincial spokesman for the party, Motalatale Modiba, denounced the protest as a blatant opposition to the government policy of replacing members of the white race with blacks, officially known as “transformation”.

“This brazen act by anti-transformation agents flies in the face of the supremacy of the Constitution of the Republic of South Africa, which advocates for equality and the advancement of human rights and freedoms including non-racialism.

“It follows several threats Comrade Panyaza has been receiving together with his family after the ANC-led government’s decision to change the language policy at certain schools in the province from Afrikaans only to parallel medium schools.”

Modiba urged Lesufi, and the Gauteng and national departments of education to lay a charge with police against Wessel Basson and his accomplice, so that they may be imprisoned. The offense caused by the effigy was seen as similar to using a racial epithet in relation to blacks, which may soon be punishable with a sentence up to ten years, if new “hate-speech” legislation becomes promulgated.

The South African minister of government communications, Nomvula Mokonyane, said that the two white men “should be isolated”.

She said that their protest was tantamount to “hate speech” which was punishable by law.

“Action must be taken,” she said. “They must be isolated by all of us. I call on all patriotic white South Africans to stand up and say: ‘Not in my name’.”

When FWM spoke to Wessel Basson, he was unperturbed about the official threats to have him locked up. “I am simply articulating a legitimate grievance,” he said. “Panyaza Lesufi is the racist, not me. He is well-known for his arrogant attitude and racist attacks, particularly on Afrikaans schools that are attended by our children. We are demanding that he should be immediately fired.”

According to Bassson, he “did not do anything racist”. He continued: “I am not going to apologise either, not for one moment. However, what I find shocking, is that we now have mass hysteria about our likeness of Lesufi, but there is no concern about farm murders and killing of our people in rural areas on a daily basis.”

“Panyaza Lesufi is an ignorant, arrogant bastard,” said Mr. Wessel Basson. “Where is our freedom of speech? They don’t know what freedom of speech is. They only see it as something that suits them. If they want to send me to prison for making this doll, then there would be no fairness or legality left. Then we are living in an authoritarian, totalitarian society.”

Basson complained that Lesufi and the education department never replied to any of his letters or petitions. “They blatantly ignored all of our petitions, whether they concerned state corruption, Afrikaans or the education system. They just ignore everybody, blatantly. Is that what ‘democracy’ is supposed to be? Not being accountable to citizens at all?”

Due to the lack of response by government, “South Africa is sitting on a time bomb,” Basson concluded.