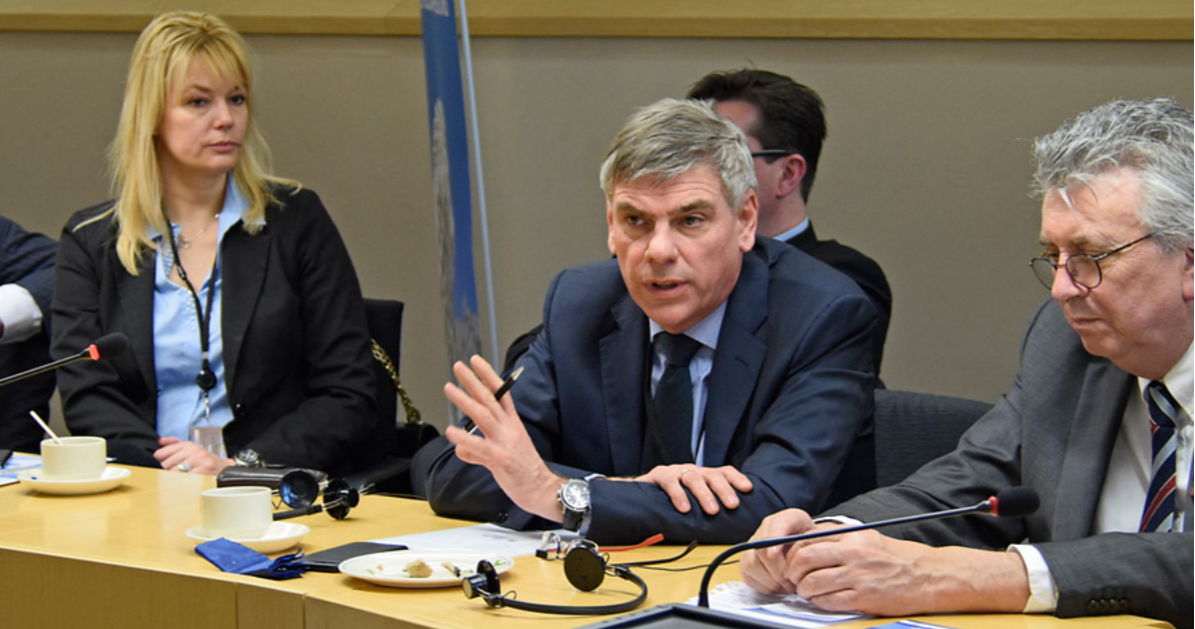 Flemish Member of Parliament and Antwerp City Councilor Filip Dewinter climbed onto the roof of the Antwerp town hall to highlight the Flemish port city's demography.

In addition to embracing the restored eagle, Dewinter from Vlaams Belang gave an Islam-critical message: “This town hall is a symbol of freedom in Antwerp. […] This city […] is occupied by Islam today.”

Dewinter gave a short history lesson in a short film on Twitter, but also an Islam-critical message: “This town hall has been around since 1565,” Dewinter pointed out, sitting next to the iconic eagle on the roof of the Antwerp town hall.

“In the five centuries that the town hall existed, it was besieged, set on fire and experienced countless revolutions, wars and invasions of our city. This town hall is a symbol of the freedom of Antwerp.”

“It is not without reason that the office of the mayor of Antwerp is made from the wood of the freedom tree that used to stand here just in front the town hall on the Grote Markt,” Dewinter continued. “Freedom is the essence of what the people of Antwerp believe in.

“This city was occupied by the Romans, the Spaniards, the French, the Germans and today by Islam,” concluded Dewinter. “Antwerp today has almost 25 percent Muslims, more than half of primary school children are Muslims, our city has more than 65 mosques. That must end. There must be an end to the occupation of our city by Islam.”

However, Dewinter’s very successful publicity stunt may be punished. At the town hall scaffolding have been erected that serves for renovation work. It is likely that Dewinter climbed onto the roof in this way. If that is the case, the Vlaams Belang leader will be risking a fine.

Immigrants are strongly represented in Antwerp in demography as well as in the unemployment figures, according to data from the city of Antwerp. The immigrant population is increasing every year, while the indigenous population is declining. More than 58 percent of the inhabitants of Antwerp are of immigrant origin. Sadly, ethnic minorities are also strongly represented in the unemployment statistics.

The birth rate of the native Flemish population is considerably lower in Europe than that of immigrants. Moreover, the native birth rate is systematically declining, while ethnic minorities are increasing. The birth rate for Muslim immigrants is more than twice as high as for native Europeans.

Women of foreign origin would have an average of 3,4 to 4 children. For European native Flemish women, that is on average 1,6 children.

These figures are also clearly reflected in the demographic statistics of the city of Antwerp. Between 2012 and 2018, the native population in Antwerp decreased in all age categories. We see the opposite for immigrants. They have been increasing in all age categories. The number of native Flemish people up to the age of 19 decreased by 6 308. The opposite is true for immigrants. The number of immigrants up to the age of 19 increased by 16 863.

“Antwerp will be taken over by non-whites and will experience South African situations, where whites are systematically discriminated against by the non-white government,” a VB voter told FWM.

This trend is also translating into the growing percentages of younger non-native inhabitants. In the age category 0 to 9 years no less than 74,10 percent are of immigrant origin. Between 10 and 19 years it is almost 70 percent. In the Antwerp district, more than 58 percent of the total population is of foreign origin, and given the birth rates, that share will only increase. North Africans in particular are strongly represented in Antwerp.

Their presence is also unmistakable in terms of unemployment. Almost 75 percent of unemployed job seekers in the Antwerp district are of foreign origin. The unemployment pressure (the ratio of the number of job-seekers of working-age to the population of working-age) is about 16 percent for immigrants. For native Antwerp residents, that is slightly more than 7 percent.

“I don’t want a Muslim as a mayor of Antwerp. But I fear that sooner or later that will happen,” Dewinter said at the beginning of the month. The Vlaams Belang leader, in an interview with De Zondag, said: “Look at Sadiq Khan, the mayor of London. He is pushing his Islamic beliefs.”

On Twitter, Dewinter added: “Most Muslims do not want to adapt, not even those born here. They reject our way of life.”

Antwerp city councilor Imade Annouri member of the Greens, who himself has Moroccan roots, expressed outrage on the social networking site. “According to Filip Dewinter, someone like me should never be the mayor of my city,” he complained. “Challenge accepted.”

In De Zondag, the leading figure of Vlaams Belang in Antwerp also spoke of the failed coalition talks over forming a Flemish government. Vlaams Belang was pushed aside by the N-VA.

“But the shadow of Vlaams Belang is still hovering above the creation of the Flemish government,” says Dewinter. He sees many similarities. “For example, linking the integration exam to a residence permit. Or a separate social security for foreigners. We have been called out for that, right? They called that racism at the time. Now the traditional parties are taking over [our policies].”

Last week, the party demonstrated with hundreds of local residents in Leopoldsburg against the opening of a new asylum center for 500 asylum seekers, saying the government should save on asylum by closing the borders.

The sovereignist party won over 13 percent of the Flemish vote during the 2018 Belgian local elections. In 2019, Vlaams Belang made huge gains in the nationwide, regional and European elections held on the same day, with 18 MPs in the Belgian parliament – a spectacular result.