An Ifop survey highlighted the growing success of collapsology, the ideology of the collapse of society, in France and in other Western countries.

Young people are more sensitive to the consequences of global warming and overconsumption, the survey showed.

The French have a reputation for being pessimists and they obviously are: According to a recent survey conducted by Ifop for the Jean Jaurès Foundation, 65 percent of French people believe that civilization as we know it will collapse. And for a third of these people, this collapse will be brutal since it will happen within 20 years.

In recent years, the success of collapsology, a thesis disseminated in France by scientists like Aurélien Barrau or Yves Cochet, has been growing. Global warming, submersion of habitable land, depletion of resources are, according to them, phenomena leading, inevitably, to collapse and the end of the world. 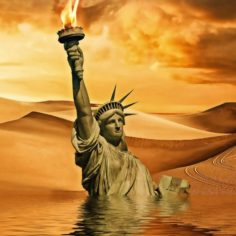 An apocalyptic vision of the world. Stock photo by Pixabay

This idea that it is the consequences of global warming and overconsumption that will lead us to our loss is shared by 27 percent of French people who believe in a collapse, reported La Voix du Nord. And a majority of them are under 35, as young people are statistically more sensitive than others to the ecological discourse.

But other scenarios likely to generate chaos are also echoed by the French, such as the notion of “uncontrolled migratory waves ” for 15 percent and “civil war or increasingly strong tensions within society” for 14 percent.

However, the survey also revealed the existence of 32 percent who are moderate pessimists – those who think that the collapse will not be sudden, but will go through a gradual deterioration visible in our living conditions.

These are the followers of “it was better before” and they believe that the decline of the world today does not bode well.